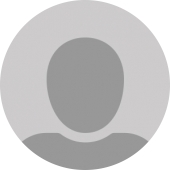 There is Nothing New about Families Paying No Income Tax

Following the flap over our Tax Policy Center colleague Bob Williams’s calculation that close to half of all families did not pay income tax in 2009, we thought it would be instructive to take a look at history. It turns out that over the past five decades, there have been other periods when families with close to average incomes have been exempt from the income tax, and that their current exemption levels were due to both Republican and Democratic efforts to reduce taxes for moderate-income households and to find alternatives to welfare.

In 1947, a family of four owed income tax once their earnings hit 89 percent of median family income (see table). Over the following three decades, this tax threshold fell steadily, reaching a low point of 33 percent by 1974, just before Congress enacted the Earned Income Tax Credit (EITC). It rose steadily from 1985 to 2003, when it reached 70 percent, where it remained through 2008. While that’s higher than most of the past thirty years, it is still below the levels of the late 1940s and early 1950s. 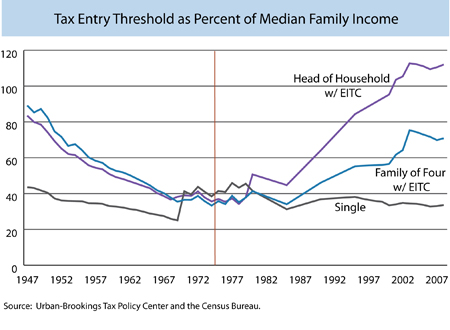 Two factors drive these numbers for families with children: (1) the significant decline in the value of the dependent exemption relative to the average family’s income (the 1986 Tax Reform Act was the major exception); and (2) the introduction of and several increases in the EITC and in the Child Tax Credit, which are treated as tax reductions for those otherwise owing tax.

If we exclude the Earned Income Credit and Child Credit and treat them like direct expenditures, the tax threshold as a percent of median income has remained relatively low in recent decades for families with children as well, increasing only slightly even from the relatively low 1975 level. (We did not include temporary effects from the 2008 Economic Stimulus Act. Including them would further increase the threshold at which families would owe tax.)

We need to be careful about interpreting these shifts as a result of liberal or conservative policies. Presidents Gerald Ford, Ronald Reagan, George H.W. Bush, Bill Clinton, and George W. Bush all approved increases in either the EITC or the Child Credit or both—as alternatives to welfare and minimum wage increases, as offsets to Social Security tax increases, and, more generally, as pro-family tax policies. After seeing some of my (Steuerle’s) work on how the decline of the personal exemption over several decades had significantly raised taxes on families with children, Reagan promoted doubling the personal exemption and, later in tax reform, removing poor families from the income tax rolls entirely. Finally, these calculations ignore the rise in the combined Social Security and Medicare tax rate on earnings from 3.0 percent in 1950 to 15.3 percent today. That change, of course, increased federal tax liabilities for low-income working families.