A Tax Plan Consistent With Trump’s April Outline Could Cut Revenue By Up To $7.8 Trillion

Tax cuts consistent with those the Trump Administration outlined in April could reduce federal revenues by as much as $7.8 trillion over the next decade, according to new estimates by the Tax Policy Center. Including significant tax increases mentioned in that outline or suggested by President Trump during the 2016 campaign could reduce the size of the tax cut by more than half. Still, it would lose $3.5 trillion over 10 years.

Without those revenue-raisers, nearly all US households would get a tax reduction, averaging about $4,400. The tax cuts would be highly regressive, with high income households getting much more than those with low-  or middle-incomes. However, if a half-dozen tax hikes are included in a revenue package, the average tax cut would shrink to about $2,300 and about one-in-five households would pay more tax than under current law.

What TPC Could Model

TPC could not model an actual Trump tax plan since far too many critical details are unknown. For instance, the Administration has been sending mixed signals about whether it wants a tax bill to raise as much revenue as current law or whether it prefers a version that reduces overall taxes and add to the deficit.

Beyond those threshold questions, the White House outline left out many critical details. For instance, during the campaign, candidate Trump said he’d increase the standard deduction but eliminate both the personal exemption and head of household filing status. The April outline repeated the promise to boost the standard deduction but was silent on the two revenue-raisers.

A Stylized Version of A Trump Plan

As a result, TPC created a stylized version of what the key elements of a Trump plan might look like. It first analyzed the tax cuts that the White House outlined in April, adding key assumptions to fill in unspecified details.  For instance, TPC assigned income ranges to the proposed tax brackets, which the Administration did not.

Then, it analyzed those cuts plus a half-dozen revenue-raisers that have been suggested by the President and his aides but not included in the April outline. To calculate the revenue effects of such a plan, TPC used both a traditional analysis and dynamic scoring that measures the effects of the tax plan on the economy and calculates how the changing economy affects revenue.

TPC did not try to analyze an actual Trump tax plan, but rather to provide perspective on what such a proposal might look like—with and without revenue raisers.

A Trump-like tax plan would be highly regressive with or without the revenue raisers. With the tax cuts alone, the lowest income 20 percent of households who make $25,000 or less would see their average after-tax income increase by $130 or roughly 1 percent. Middle-income households, who make between about $50,000 and $86,000, would see an average increase in after-tax income of about $1,900 or a bit more than 3 percent. 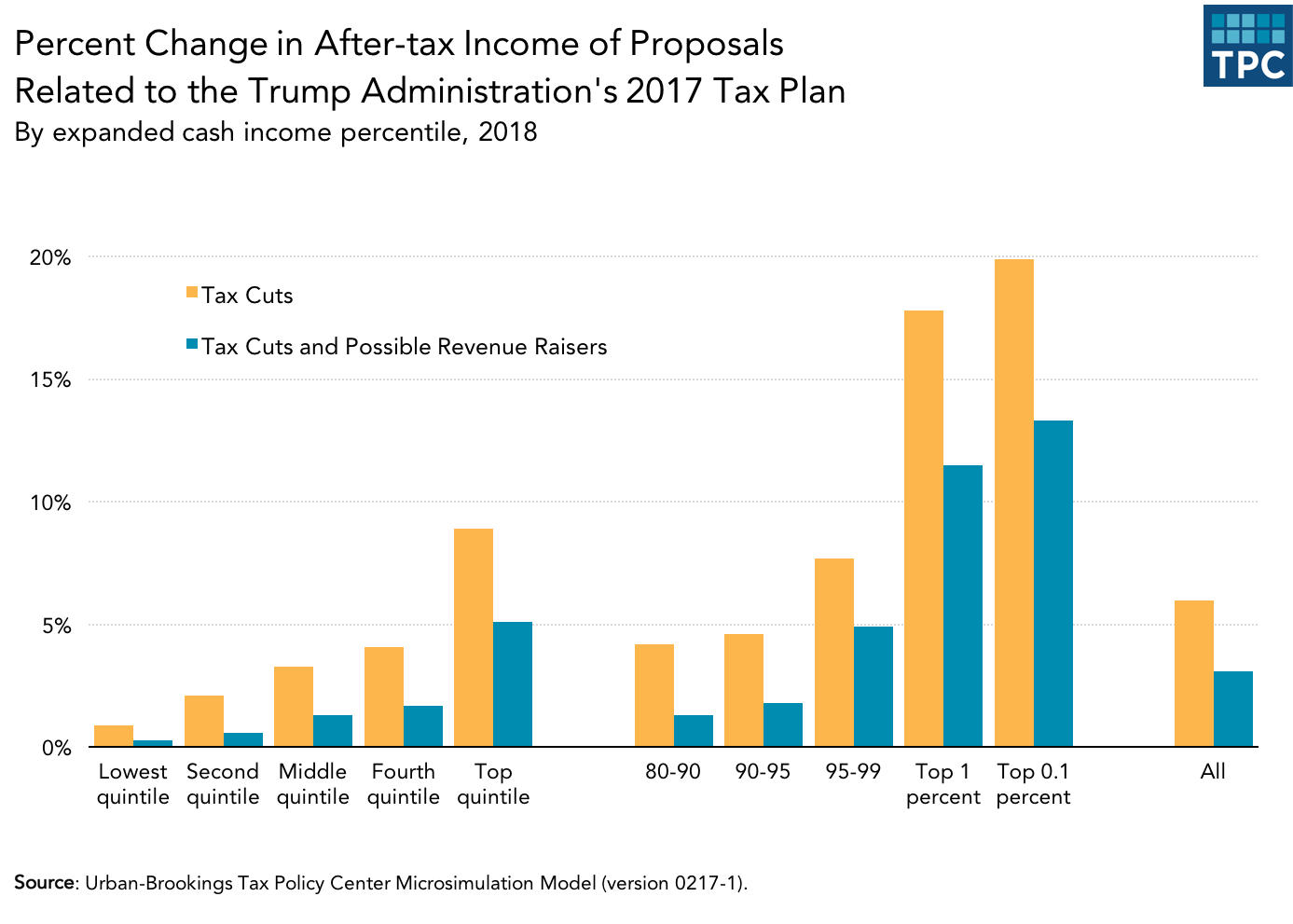 Interestingly, with the revenue raisers, about 20 percent of households would face higher taxes than under current law.  On average, they’d pay about $1,600 more.

TPC analyzed a tax cut package that includes individual income tax rates of 10-25-35 percent; repeal of the Alternative Minimum Tax, the estate tax, and the Affordable Care Act’s 3.8 percent net investment income tax; a doubling of the standard deduction; and tax relief for families with child and dependent care expenses.

For businesses, it included an income tax rate of 15 percent for both corporations and pass-throughs such as partnerships and sole proprietorships, and a territorial system of taxing foreign income along with a one-time tax on unrepatriated foreign earnings.

TPC’s analysis of the revenue-raisers included proposals to repeal all itemized deductions except those for charitable giving and mortgage interest, repeal of the personal exemption and head of household filing status, and repeal of certain business tax preferences. It also included a tax on capital gains at death in excess of $5 million and a tax on distributions from large pass-throughs.

While we don’t know what tax plan the president will propose in the coming months, it would have to look very different from what we’ve seen so far to avoid adding trillions of dollars to the debt and heavily skewing its benefits to the highest-income households.