Tax Day Is Here, And State Budget Offices Share Your Fears And Hopes For A Good Return

With Tax Day here, taxpayers are scrambling to finish up their returns—both federal and state (that is, if their state has an individual income tax). At the same time, state budget officers are scrambling to figure out what their revenues will look like this year. With states still adapting to the Tax Cuts and Jobs Act (TCJA) and the economy uncertain in many states, this work is particularly difficult this year. And just like an unexpected tax bill can upend a household’s finances, big revenue swings around Tax Day can also cause havoc with state Budgets.

The Tax Policy Center’s State and Local Finance Initiative reviewed actual and forecasted personal income tax revenues for the first eight months of fiscal year 2019 in 23 states. Our preliminary analysis finds that while median revenues grew 1.2 percent, actual collections are down in nine states compared to the same period last year. The largest decline by far was in Idaho, followed by smaller but substantial reductions in California and New York. Idaho’s revenue drop was mostly attributable to tax cuts passed in 2017, while officials in New York and California blame the federal tax overhaul (2017’s Tax Cuts and Jobs Act) for the declines in income tax collections. In short, many individual taxpayers in these states probably shifted income when they made state tax payments because they’re no longer fully deductible on the federal return. 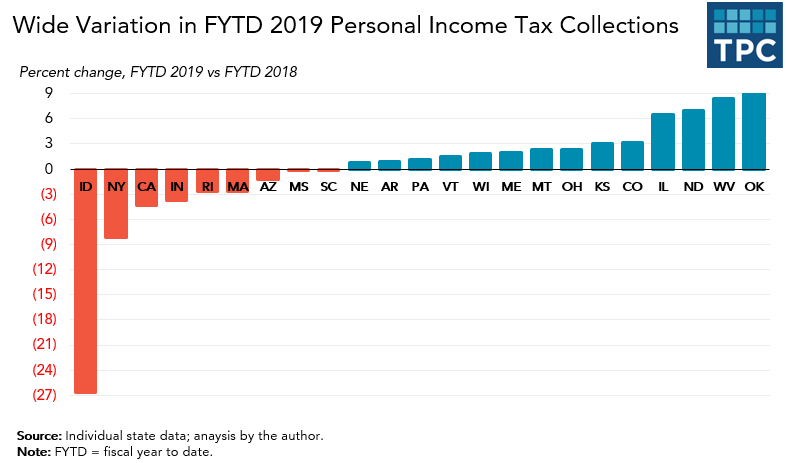 Preliminary figures also indicate that personal income tax collections through February 2019 were below forecasted revenue in 19 states, with a median shortfall of 2.2 percent. Although revenue forecasters in most states factored in taxpayers’ behavioral responses to the federal tax policy changes, most states overestimated the growth in income tax revenues. Still, state officials are hoping for rebounding income tax revenues and anticipating higher estimated and final payments in April 2019, believing that filers merely delayed their payments this year in response to the new law.

Officials are banking on this because they just saw a similar thing happen last year. In fact, many states ended fiscal year 2018 with budget surpluses because of TCJA-related timing shifts. The same taxpayers who may be delaying state tax payments because of the new $10,000 cap on state and local tax deductions apparently accelerated their state and local tax payments into calendar year 2017 to take advantage of a larger federal tax deduction —as we discussed in our State Tax and Economic Review reports.

But if the right amount of revenue eventually shows up there’s no problem, right? Not exactly. An April income tax windfall or shortfall happens at the absolute worst time for states because they are nearing the end of their fiscal years (which end on June 30 in 46 states) and wrapping up legislative sessions—including budget negotiations. This means an income tax revenue shortfall in April can squeeze states operating with small or no cash balances, while an April windfall can prompt state officials to quickly increase spending or cut taxes even while long-term trends might call for moderation.

Further, income shifting by taxpayers between tax years adds more unpredictability to an already difficult calculation. One example of the inherent unpredictability is shown by declines in state income tax revenues in the first eight months of fiscal 2019 which are steeper than forecasted in part because of the weak stock market performance in December 2018 and January 2019. But the recent stock market rebound may reverse some of these declines.

For most individual taxpayers, their 2018 tax year work is done with the filing of tax returns by April 15. But state budget officials still have plenty of work to do.