The Tax Cut And Jobs Act’s Phase-Ins, Phase-Outs, And Sunsets Do Not Make A Pretty Picture

Among the complexities of the Tax Cuts and Jobs Act are its multiple timing changes.  Both the House and Senate bills are filled with delayed effective dates, sunsets, and phase-outs.

Take the Senate version: A few provisions would take effect this year, many in 2018, and others not until 2019. Some are permanent, many would last for seven years, one would expire after six, and another would last only a bit more than one. My Tax Policy Center colleague Dan Berger created a chart that shows just some of them. 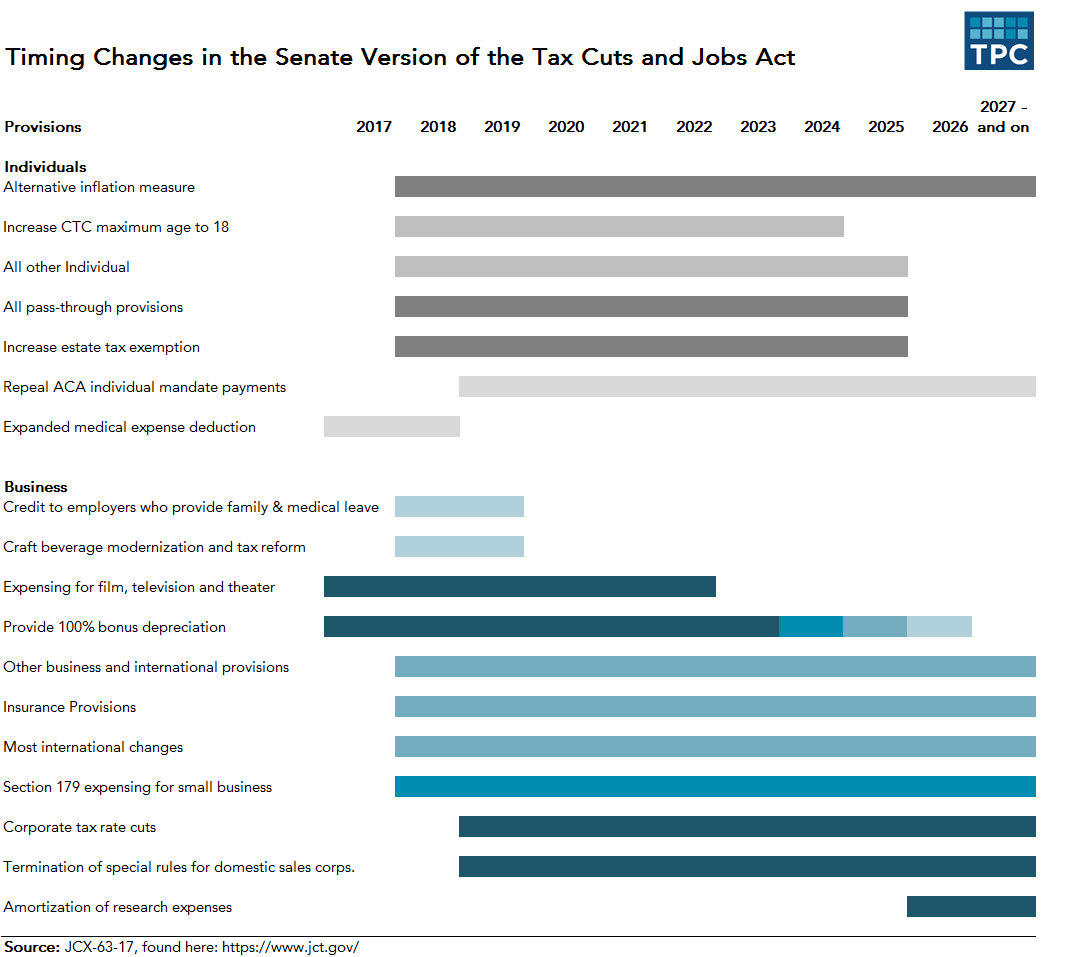 The House bill has its own on- and off-switches but putting them in the figure would have made it too complex to follow. The reason Congress fills both bills with these timing shifts has nothing to do with good tax policy. It is all about hitting an artificial target--squeezing as many tax cuts as possible into the $1.5 trillion over 10 years budget box Congress built for itself. To pass the bill without Democratic votes in the Senate, GOP leaders chose to use special budget rules that allow them to win approval with only 50 votes. But to use those rules, the final bill must not lose more than $1.5 trillion over the coming decade, and no revenue at all after that.

The solution was obvious, though not pretty. Delay the effective dates of many tax cuts to make them appear less costly. Switching off nearly all of the individual income tax changes after 2025 would help them appear to fit in the 10-year box and avoid losing revenue in the long run. In one especially interesting choice, the Senate would allow businesses full expensing of some capital investment starting for purchases made after this past September and through 2022, but then slowly phase-out the more generous tax treatment until it disappears after 2026.

Few of the lawmakers voting to manipulate the timing of the TCJA’s changes really believe the tax cuts  will be repealed. Trump Administration Budget Director Mick Mulvaney candidly admits they exist merely to “game” the system and implies Congress will extend them as soon as it gets the chance.  The problem, of course, is that promises notwithstanding, phase-ins, phase-outs, and sunsets all create exactly the sort of uncertainty that lawmakers claim to hate, and businesses really do hate.

Worse, as House and Senate negotiators try to shoehorn more special interest deals into the final bill to win additional support, they are likely to add even more timing shifts.

I doubt they’ll ever make a musical out of the TCJA. But if they do, they could borrow from Sheldon Harnick’s lyrics to the Broadway musical Fiddler on The Roof:

One season following another,