President Trump’s 2020 budget is based upon an extremely optimistic view of the nation’s economic future. The White House forecast is in stark contrast to the Congressional Budget Office’s projection from just two months ago, which sees far slower growth. 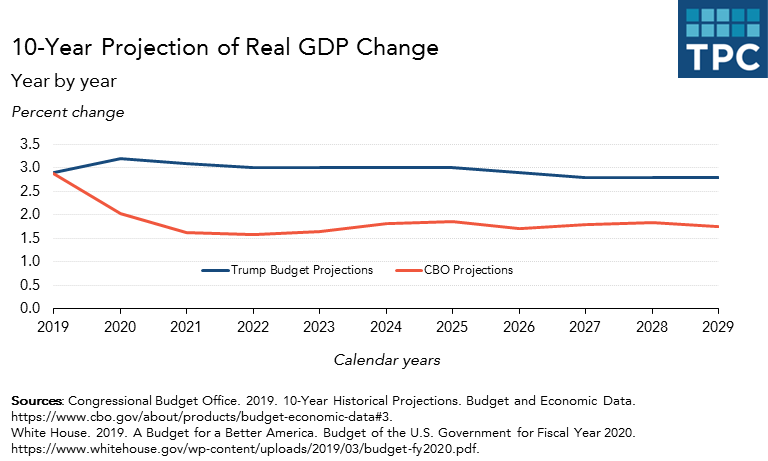 Trump’s fiscal plan forecasts the economy will grow by 3.2 percent this year (after adjusting for inflation), at least 3 percent annually through 2024, and by about 2.8 percent from 2026 through 2029. By contrast, CBO projects real economic growth of about 2.7 percent this year, falling to 1.9 percent in 2020, then ranging from 1.6 percent to 1.8 percent through the next eight years. On average, CBO projects the economy will grow about a full percentage point more slowly over the next decade.

That difference adds up. Cumulatively, Trump predicts the economy will produce $307 trillion in goods and services over the next decade. By contrast, CBO estimates GDP will total $284 trillion, about 17 percent less.

In 2029 alone, Trump projects total US output will exceed $35 trillion, while CBO estimates about $31 trillion—about 11 percent less. Even by Washington standards, $4 trillion of economic output in a single year is a lot of money.

Trump’s robust growth estimates not only allow him to project a rosy economic future for the country. They also help make it possible for him to paint a much-improved fiscal picture. The White House claims its fiscal plan claims will reduce the ratio of the federal government debt to GDP from about 78 percent today to about 71 percent in 2029. Some of that decline would result from its proposed (though politically improbable) domestic spending reductions. But most is the result of the Administration’s strong growth assumption that implies higher tax revenues from rising labor and capital income as well as some lower spending for economically-sensitive safety net programs such as Medicaid or unemployment compensation.

The Committee for a Responsible Federal Budget calculated how different growth assumptions drive debt projections. In 2029, assuming no change in current law, CBO figures the debt/GDP ratio would reach 93 percent. Under Trump’s budget, but with the CBO’s growth assumptions, the debt/ GDP ratio would rise to 87 percent (even with those large but improbable spending cuts) instead of dropping to 71 percent.

Of course, it is impossible to know whether CBO or the president will turn out to be right. But several factors suggest it may be CBO: The economy already is close to full employment and an aging population and curbs on immigration mean the labor force is likely to grow very slowly. A future burst of productivity could offset labor force challenges but it is impossible to know if, or when, that would occur. As a result, CBO’s projections more closely track estimates of most private forecasters and the Tax Policy Center, as well as the Federal Reserve.

Rosy White House economic scenarios hardly are new. But the gap between this one and more mainstream forecasts is uncommonly wide.