As states prepare to debate their fiscal year 2018 budgets, many continue to face tough fiscal outlooks. About half failed to meet revenue targets last year and half have already had to revise the current year. Which is surprising given that the economy is relatively strong and we certainly aren’t in a recession.

Despite low unemployment and a strong stock market, state economists expect tepid economic growth over the next few years which will result in relatively slow revenue growth. Median state revenue in fiscal year 2016, which ended in June for most states, only grew 2.3 percent and is only expected to rise by only about 3 percent in 2017 and 2018.  Adjusting for expected inflation of about 2 percent, real growth in revenues is essentially flat. 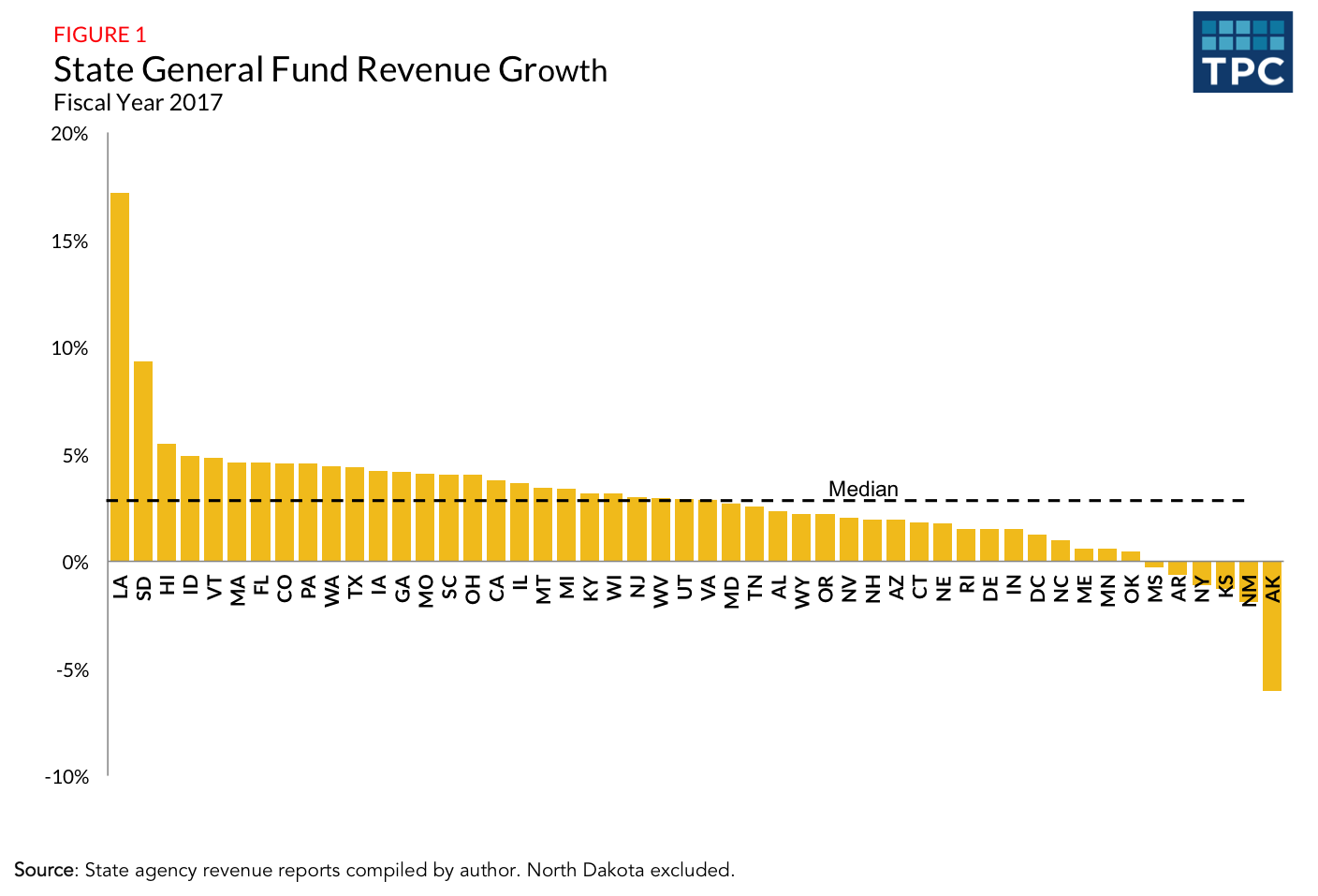 According to our review of state agency revenue forecasts, 10 states project less than one percent growth in nominal 2017 revenue. And six of them are expecting less revenue in 2017 than they collected in 2016:

Fifteen states have projected growth over 4 percent but even that positive news comes with caveats.  The fastest growing states, Louisiana and South Dakota, had sizeable tax increases.  For Louisiana, the one percentage point increase (from 4  to 5 percent) is temporary, expiring on June 30, 2018, and was enacted with a package of tax increases to offset the collapse in oil revenue. In South Dakota, where sales tax revenue accounts for most state revenue, the sales tax rate was increased from 4 to 4.5 contributing to the strong growth in 2017.

Revenue forecasts are more uncertain than usual since taxpayers may already be adjusting their behavior in anticipation of revisions in the federal revenue code. As we’ve observed in the past, the prospects of federal tax changes can increase volatility for state tax collectors. Maine and California both mentioned potential changes in federal policy as sources of additional uncertainty to their forecasts.

For instance, because Donald Trump and an all-Republican Congress could well lower tax rates on both ordinary income and capital gains, many taxpayers may be taking capital losses this year while waiting until 2017 to realize gains. As a result, fourth quarter estimated tax payments and final payments in April could be lower than states expect, creating an unwelcome April surprise for states.

These uncertainties and the apparent disconnect between economic growth and revenue growth are making forecasting more difficult.  As the California Legislative Analyst's Office put it: “The condition of the state’s budget depends on many volatile and unpredictable economic conditions, including fluctuations in the stock market. Even in the short term, these conditions cannot be predicted with precision. They are even more difficult to anticipate years in the future.”