The child tax credit (CTC) is an important subsidy for low- and moderate income families with children. But lawmakers and policy analysts are looking at ways to reform the credit. To help understand how each of these ideas would work, the Tax Policy Center looked at six different ways to retool the credit, and found big differences in costs and who would benefit.

Today, the CTC provides a subsidy of up to $1,000 per child under age 17. Parents with little or no tax liability are eligible for a refundable credit up to the $1,000 maximum—but they must earn at least $3,000 to benefit from the refundable portion of the credit. Once a parent’s adjusted gross income reaches $75,000 ($110,000 if married) the credit starts to phase out. Still, roughly 80 percent of all families with children benefit to some degree from the credit. 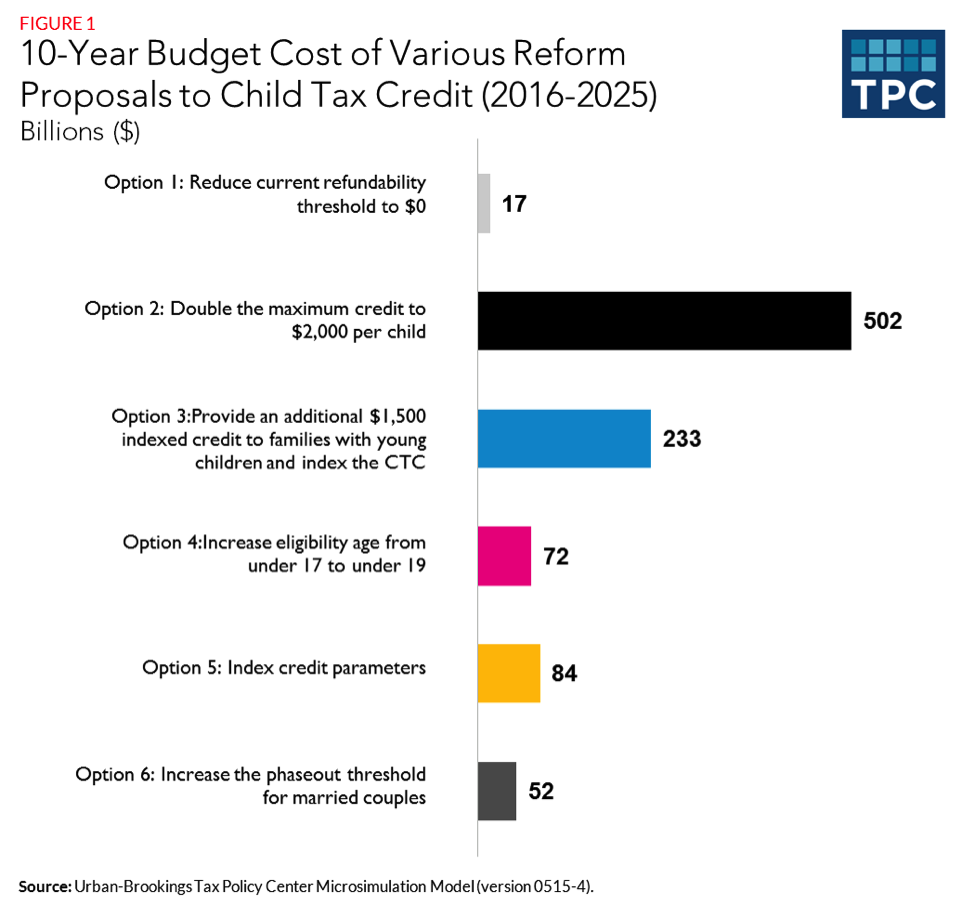 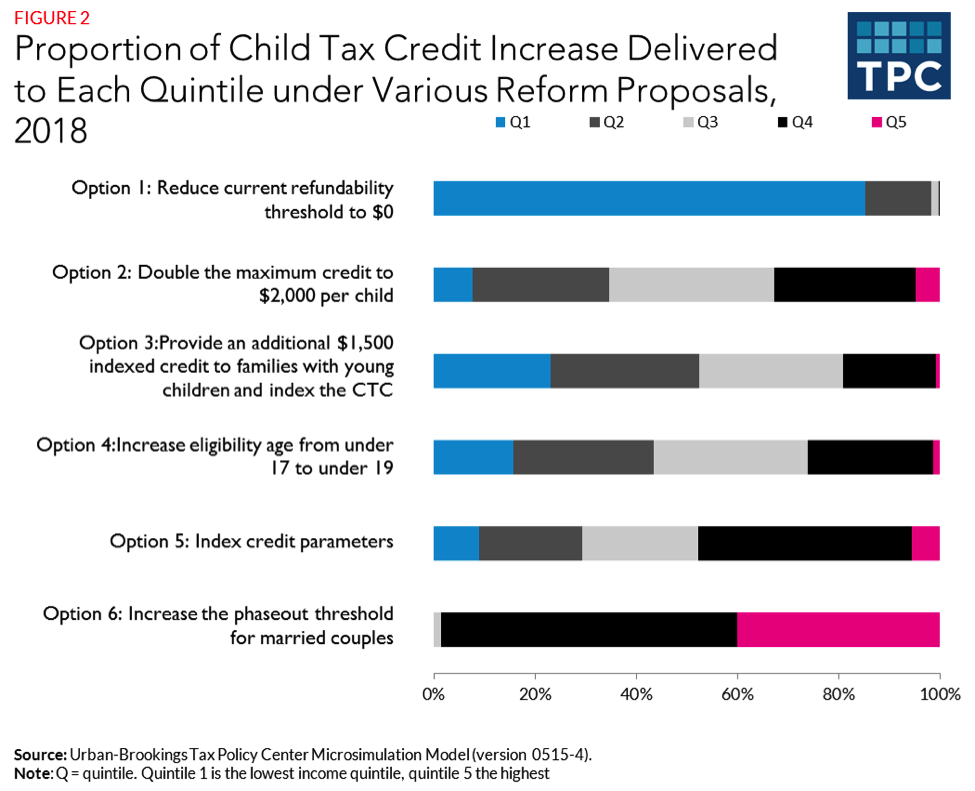 Reduce the refundability threshold to $0. This option would allow families to receive their child credit starting with their first dollar of earnings. Because most children who qualify for the CTC have parents who earn enough to receive the full credit, only very low-income families would benefit. This option would cost about $17 billion from 2016-2025, much less than the other ideas. Eighty-five percent of benefits would accrue to the lowest-income families, and less than two percent of benefits would accrue to families in the top three income quintiles.

Double the maximum credit to $2,000 per child. Providing a larger credit – without also increasing the eligible population or the credit phase-in rate – would target families with higher incomes and cost about $500 billion over 10-years. Only a small portion would help families in the lowest income quintile, while 87 percent would go to middle-income households. The biggest beneficiaries would be families with enough income to qualify for the larger credit but not so much that the credit would be phased out.

Increase the maximum age for eligibility for the credit from 16 to 18. This model would align CTC benefits more closely with other child benefits. While it would expand the pool of eligible children, the subsidy would be distributed similarly to current benefits. The lowest income families would receive almost 16 percent of benefits, with most of the rest going to families in the second through fourth income quintiles. This proposal would cost about $70 billion.

Index all elements of the CTC for inflation. This would prevent the maximum benefit from being eroded by inflation and make the CTC more consistent with other parts of the tax code such as the earned income tax credit (EITC) and tax bracket thresholds. Only those households who get the maximum credit under current law would benefit from this expansion. Over 40 percent of benefits would go to households in the fourth income quintile, and while the highest-income households would get almost 6 percent of the benefits. Since indexing would increase the  phase-out points, low-income families (many of whom do not make enough to take advantage of the credit) would get less than 10 percent of the benefits. This reform would cost about $84 billion over the 10-year budget window.

Increase the phaseout threshold for married couples. Today, the CTC can create a marriage penalty because it begins phasing out for married couples at a level less than twice that of single parents. This reform, which would cost $52 billion, would direct benefits almost exclusively to families in the fourth and fifth income quintiles. While it would eliminate the CTC’s marriage penalties, it would also create or increase marriage bonuses.  For example, a one-earner married couple with income of $110,000 currently receives a full credit while a single parent (or unmarried couple) with up to two children gets no credit.  Under the proposal, the married couple would qualify for the full credit.

Which of these ideas is best? That depends on your distributional goals and how much money you want to spend.