Should the Child Tax Credit Be Limited to Those with Lower Incomes, As Manchin Prefers?

In 2021, the Child Tax Credit (CTC), helped nearly all families with children. But this year, because American Rescue Plan (ARP) expansions have lapsed, it is concentrating benefits on middle-income families. High- and low-income parents are receiving more limited assistance. And, as Democrats try to find a path forward for their stalled Build Back Better (BBB) social spending and tax bill, they are in the midst of an intense debate over how to restore those benefits for very low-income households. But what should they do about those high-income parents?

The issue is getting attention since Sen. Joe Manchin (D-WV), a key BBB holdout, reportedly suggested to fellow lawmakers that he’d support BBB if CTC benefits for high-income families are trimmed or even eliminated.

The expanded CTC is celebrated for cutting child poverty nearly in half and reducing it below 10 percent in all but three states. And it’s easy to question why current law allows families making more than $400,000 to claim the credit. But phasing it out at lower incomes creates its own problems. It can create high hidden tax rates, could undermine the credit’s advance payment feature and the credit’s overall political support, and could create coverage disparities across states.

And there are better ways to address this problem. For example, Congress could retain the current CTC schedule but raise tax rates for the highest income households. That idea is less likely to violate President Biden’s pledge to not increase taxes for families making less than $400,000.

The CTC’s benefits and eligibility thresholds were raised, starting in 2018 because of the Tax Cuts and Jobs Act (TCJA) passed in 2017. The TCJA consolidated several family tax benefits including the personal exemption for dependents and the CTC. These rules were to be in place until 2025, at which time, the 2017 rules would come back.

But CTC benefits were raised again for many in the 2021 American Rescue Plan. More importantly, eligibility thresholds were re-adjusted to include very low-income families in the maximum benefit. The ARP benefits and eligibility rules expired in December, and the credit now operates under the 2018 rules. The three versions of the law deliver different levels of benefits to people at different income levels (see figure). 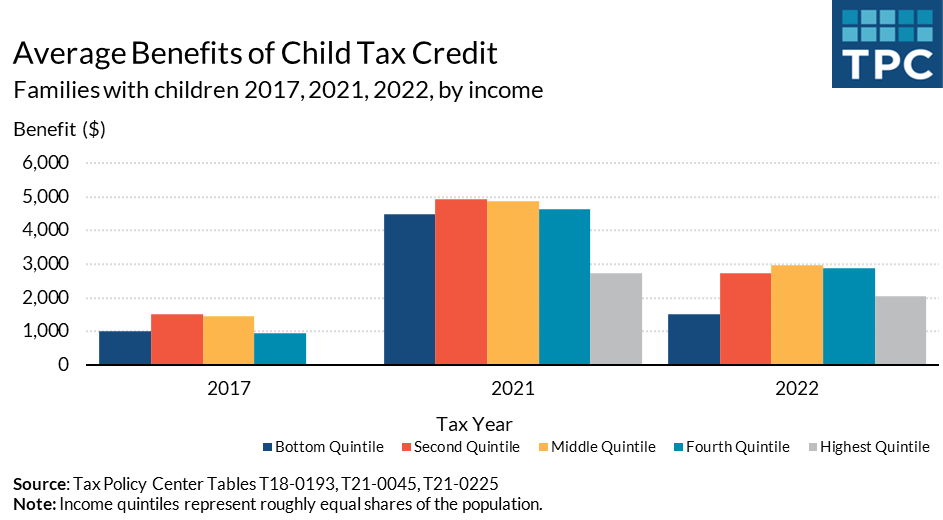 Before 2018, the personal exemption for dependents was an important tool to adjust taxes based on family size. All else equal, larger families are less able to pay taxes than smaller ones. The TCJA significantly raised CTC benefits for high income families, but those increases were mostly offset by its repeal of the dependent exemption as well as other changes it made to benefits affecting families with children.

At first glance, it makes sense to phase out the CTC out earlier for families. Does the government really need to subsidize the children of high-income parents?

A critical question will be where Congress sets the eligibility limits – and if the lower limits are for the full credit or only the 2021 bump up in the credit. Congress may get very different results if it starts to phase the entire credit out at $150,000 for couples filing jointly (the level that the increased benefits started phasing out in the now-expired 2021 law) or lower the thresholds even further.

It may also be that Manchin is only concerned with reducing the limits for the higher credit implemented in 2021, leaving the $2,000 credit in place for everyone else receiving it. Here, too, it will matter how much lower the limits are sent.

Phaseouts, when added to other parts of the tax system, can create high rates on those last dollars earned.

Lowering eligibility thresholds creates an additional dynamic: High-income parents would be providing additional subsidies for low- and middle-income families with children. By contrast, with a tax rate increase, all high-income households (including those without children) would be helping out low- and middle-income families with children. This may be more equitable since removing children from poverty  benefits all of society.

If Congress restores the monthly CTC payments (another provision that expired at the end of 2021), lowering income eligibility levels for either the bump up of the credit or the entire credit could reduce the effectiveness of those advance credits. Especially if the credit phases out at relatively low levels, families may be less likely to participate because benefits are less certain.

Limiting eligibility also could lessen political support for the CTC in two ways.

First, it makes the credit look more like a welfare program while broader assistance programs tend to win wider support. For example, the extensive public backing of Social Security may stem from its near-universal benefits.

Second, phasing out the credit at lower incomes would also have different effects in different locations. For example, a much larger share of West Virginia families will be covered by a CTC that phases out at $50,000 or $100,000 than those in, say, California. That might strike senators from high costs states as unfair.

It is hard to argue that Congress should continue to provide CTC benefits to parents making $400,000. But lawmakers should think carefully about how low to set the new eligibility threshold and consider all the potential consequences of reducing it.