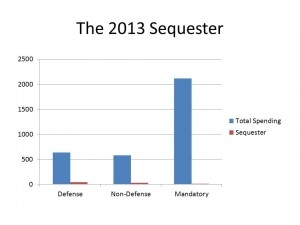 The Sequester is Not Too Big, It is Too Stupid

The latest chapter in Washington’s never-ending fiscal drama is about to play out in tomorrow’s sequester--a word most Americans should never have had to learn. For all the partisan noise about these automatic spending cuts, it is important to keep in mind that they are both relatively small and very stupid.

First, the size. As the chart below shows, the amount of money at issue is modest--at least in federal budget terms. The blue bars represent CBO’s total spending projections for 2013. The red bars (if you can even see them) represent the amount that would be cut as a result of the sequester. 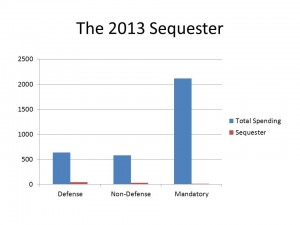 This, of course, is where stupid comes in.

The across-the-board nature of the spending cuts has been well-noted. Federal agencies have little or no discretion to target spending cuts by, say, getting rid of obsolete or poorly-run programs. They have to cut them all, the good ones and the bad ones alike. They can’t lay off poorly performing workers, they must furlough everyone.

The cuts also suffer from poor timing. With the economy still struggling to find its footing, even modest fiscal austerity seems myopic at best.

The division of the cuts is just as dumb. Mandatory programs represent 57 percent of all federal spending—and will absorb far more over the long run--yet only about 16 percent of the sequester will come from payments to Medicare providers and a small amount of other mandatory spending (Medicaid, Social Security, and Medicare benefits are entirely exempt from the sequester). The defense budget, by contrast, is about 18 percent of all federal spending yet the military will suffer half of the sequester cuts.

Keep in mind that the $85 billion reflects cuts in budget authority for 2013. Actual outlays, or dollars out  the door, will be cut by only half that much between now and the end of the fiscal year in September. On the other hand, because a year’s worth of cuts would be squeezed into just seven months, agencies may feel them more severely.

Finally, revenues are totally excluded from this exercise. You’d think that a government that collects $2.7 trillion in taxes and other revenues might find a few billion more in inefficient and inequitable tax subsidies if deficit reduction is so important.

This exercise in mindless cutting is, more than anything, a plea for a serious budget process. Flawed as it was, the system in place over the past decades made a certain amount of sense. The House and Senate budget committees set  spending targets and instructed appropriations committees to work within those limits. The tax-writing committees were similarly given revenue targets to meet.

Those of us who lived through those budget years are hardly nostalgic. Congress shamelessly gamed and manipulated the targets, often aided and abetted by whoever was in the White House. Entitlements were largely exempt from the process. But it was better than what we’ve had in recent years—never-ending crises instead of an actual budget.

The sequester will neither solve the deficit problem nor help government work smarter. Instead, it will indiscriminately damage good programs and bad. That may be fine if you think of government as the enemy. For the rest of us, it is just another exercise in stupidity.