Senator Bernie Sanders (I-VT) would increase federal taxes by more than $23 trillion over 10 years, according to a new analysis by the Tax Policy Center. Excluding tax hikes to fund Medicare For All (M4A), Sanders would boost federal revenue by nearly $10 trillion over the next decade—about 3.6 percent of Gross Domestic Product. His  M4A-related taxes would total another $13.4 trillion, or about 4.9 percent of GDP.

Over the next 10 years, Sanders would increase federal revenues by 50 percent. As a share of the economy, his plan would result in the largest tax increase in US history.

TPC divided its analysis into those tax increases earmarked for M4A and all other tax hikes. While it produced revenue estimates for both, it analyzed the distributional effects of his non-M4A tax increases only. In some cases, because the Sanders campaign would not specify exactly how he’d divide revenues between M4A and everything else from certain tax increases, TPC made its own assumptions.

High-income households would pay the most

TPC found that the highest-income one percent of households would pay nearly two-thirds of the non-M4A tax hike proposed by the Democratic presidential hopeful. Those changes would cut their after-tax incomes by an average of nearly 30 percent. 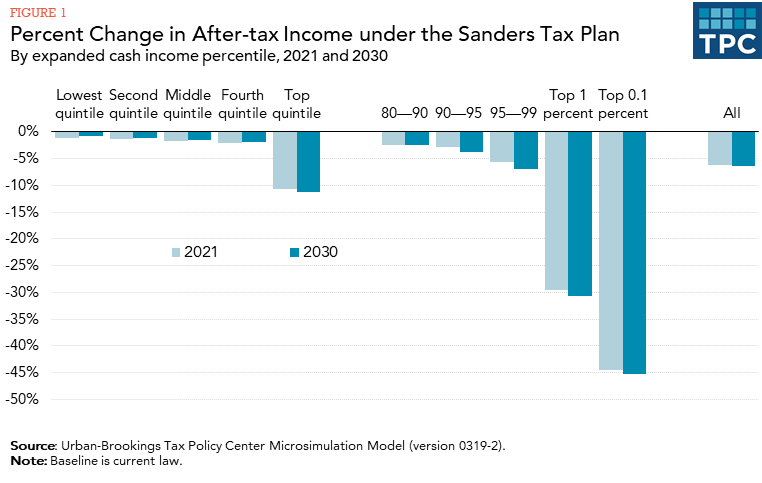 Medicare for All taxes

TPC estimates that these provisions would raise taxes by an additional $13.4 trillion.  This would likely still fall well short of fully funding the plan. A separate analysis by the Urban Institute’s Health Policy Center finds that a Sanders-like public insurance program would increase government costs by about $30 trillion over the next decade.

However, while many people would pay higher taxes under the Sanders plan, they would no longer have to pay health insurance premiums, deductibles, or most co-pays.  TPC did not estimate the net effects of that trade-off or the distributional effects of his M4A-related tax changes, though it may do so in the future.

The tax burden of the Sanders tax increases (excluding the M4A tax hikes) would fall overwhelmingly on businesses and high-income households. TPC estimates that the top 1 percent of households would pay nearly 64 percent of the tax hikes. On average, Sanders would raise their taxes by about $520,000.

The top 0.1 percent (who will make $3.7 million or more in 2021) would bear about 44 percent of the burden of Sanders’s non-M4A tax hikes, and their after-tax incomes would fall by about 45 percent. Their taxes would increase by an average of $3.5 million.

Households in the bottom 80 percent of the income distribution (those making less than about $170,000) would see their after-tax incomes fall by 2 percent or less, on average. Nearly all of that reduction would be the indirect result of the business tax increases in the Sanders plan. TPC assumes that in the long-run, about 60 percent of the corporate income tax is borne by shareholders, 20 percent by other owners of capital, and 20 percent by labor.

TPC estimates that two major Sanders proposals would raise significantly less revenue than the Vermont senator claims. TPC figures his wealth tax would raise about $2.3 trillion over 10 years rather than the $4.35 trillion the Sanders campaign projects, largely because the very wealthy would find more ways to avoid paying the tax than Sanders assumes. Similarly, TPC projects his financial transactions tax would raise about $630 billion, only about one-third of Sanders’s estimate of $2.4 trillion. The main reason: The tax would eliminate most high-frequency trading, which accounts for about 80 percent of Wall Street volume.

Sanders is proposing enormous increases in many government programs. While TPC cannot estimate the costs or distributional effects of those changes, it has been able to calculate the impact of his tax proposals. They would be historic in size and, as Sanders has promised, they would result in major tax increases for high-income households.