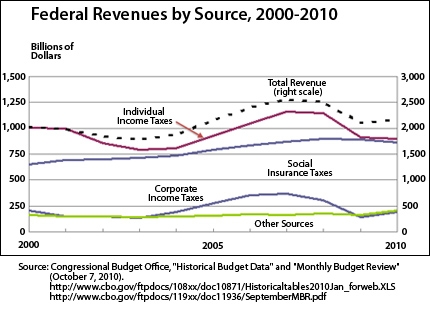 Rising Federal Revenues—But Only from Firms and the Fed

Federal revenues rose nearly 3 percent from fiscal year 2009 to FY2010. But virtually the whole increase came from higher corporate income taxes and a more than doubling of Federal Reserve earnings. Preliminary data in the Congressional Budget Office’s October Monthly Budget Review reveal that revenue climbed $57 billion to $2.16 trillion in the fiscal year that ended last month (see graph). Combined with a $67 billion fall in outlays, that revenue gain cut the federal deficit by $125 billion to a still astronomical $1.3 trillion, or 8.9 percent of GDP. Bad as that is, it’s well below 2009’s deficit of 10 percent of GDP. 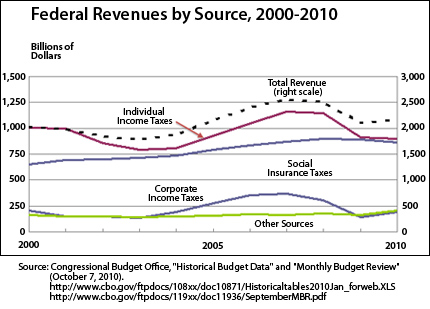 But both individual income and social insurance taxes fell in FY2010-- fallout from continuing high unemployment. Income tax receipts were down 1.6 percent ($14 billion) and the taxes supporting Social Security and Medicare dropped more than 3 percent ($28 billion). Had these revenue sources held constant, the deficit would have shrunk another 0.3 percent of GDP.

Revenues are still far shy of their 2007 peak, down more than $400 billion. But the past year’s increase is encouraging. Now all we need is a return to full employment, even stronger corporate profits, and a healthy housing market. It could be a long wait.