The earned income tax credit (EITC) lifts millions of working families out of poverty, but provides little support to workers without children and some low-wage workers married to other low-wage workers. Congress could fix this flaw by scaling back the EITC and creating a new worker credit that is based on individual earnings and not contingent on having children at home.

A worker credit could provide substantial benefits to all low-income workers, could encourage childless individuals and secondary earners to work, and avoid large marriage penalties. And it would be easier for the IRS to administer and avoid many of the filing errors that plague the EITC today.

The basic proposal would:

A modestly generous worker credit designed to offset up to about $1,500 of both the employer and employee shares of payroll taxes could provide benefits to almost 42 million workers left out of today’s EITC. The Tax Policy Center estimates the worker credit would reduce revenues by about $870 billion over the next decade. Phasing out the credit for some two-worker households would reduce the ten-year cost to around $600 billion. Smaller credits would cost less.

The worker credit could cut taxes for about 40 percent of taxpayers, by an average of $976. About 4 percent of households would face a tax increase, averaging $257. The largest driver of this increase is the worker credit phasing out sooner than the current EITC for workers with at least two children. 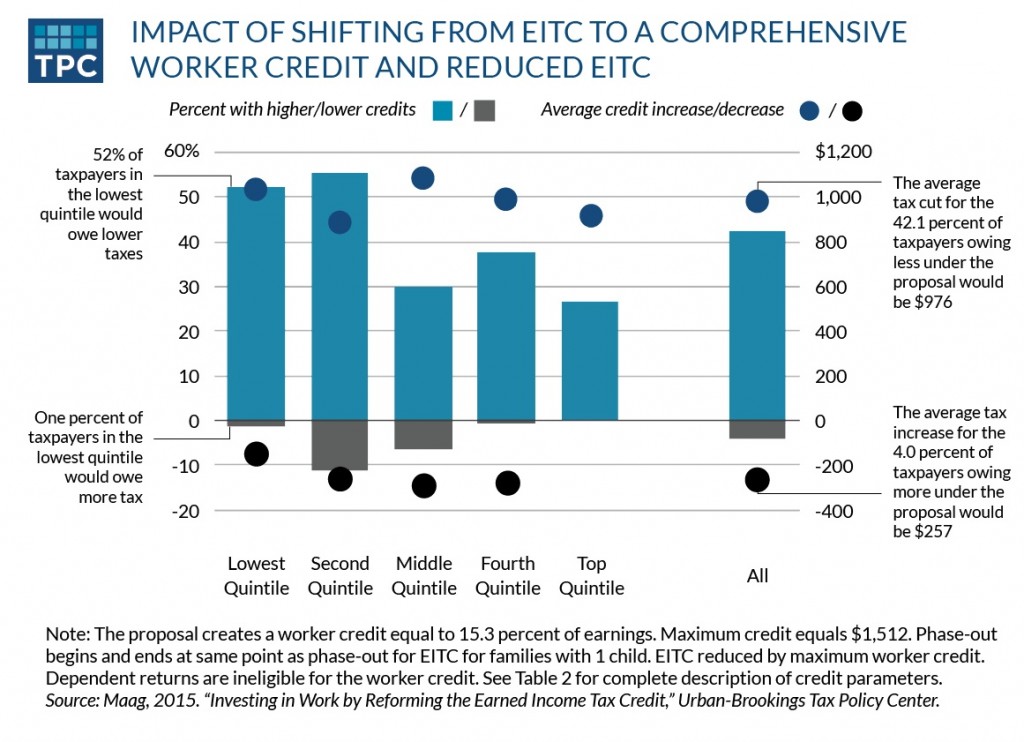 Like the payroll tax, the worker credit would be based on individual earnings. The IRS would not need to determine a child’s residency for the worker credit, which is the largest source of erroneous EITC payments, according to a recent IRS study. The reduced EITC would retain the current residency tests, but fewer dollars would be associated with that credit – decreasing the total amount of potentially errant payments.

When Congress expanded the EITC in the 1990s, single mothers with children worked more. The new credit could have the same effect on childless adults and could encourage work by individuals—particularly men— without children living at home. That in turn could increase marriage rates, reduce incarceration, and boost child support payments.

The basic proposal would make the credit available to high-income couples with one low-income worker. Phasing it out on joint income would address that issue and decrease the 10-year cost to about $600 billion. However, it would also introduce marriage penalties into the worker credit, a troublesome aspect of the current EITC. Depending on the design of the phase-out, these penalties in a worker credit that phases out with joint income could be offset by bonuses these same couples benefit from, which stem from other parts of the federal income tax.

Many Democrats and Republicans favor using the tax code to encourage low-income adults to work, and many past proposals have focused on childless workers. Indeed, in recent work commission by the Peter G. Peterson Foundation led nearly all would-be reformers to include an expansion of work incentives in their tax reform proposals.

A worker credit is a potentially costly option but it has important benefits. By reducing disparities between the tax treatment of workers with and without children, encouraging secondary earners to work, avoiding large marriage penalties, and easing both tax filing and tax administration, the proposal should be part of any future tax reform debate.