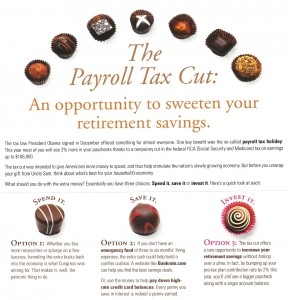 The Paradox of Thrift, or What to Do with My Payroll Tax Cut?

A major goal of last December’s Tax Relief Unemployment Insurance Reauthorization and Job Creation Act of 2010 (aka extending the Bush-era tax cuts) was to boost the economy by avoiding scheduled tax increases and, at the same time, adopting a few new tax cuts. Both steps, supporters claimed, would put more money in people’s pockets and boost the still-weak economy. Temporarily extending the Bush-era and 2009 tax cuts and patching the alternative minimum tax staved off the tax hikes. The one-year cut in the FICA payroll taxes that finance Social Security will add about $110 billion to paychecks this year, disregarding the offsetting loss of roughly $60 billion from the expiration of the Making Work Pay credit (MWP). Give people more money and they’ll spend it, thus stimulating the economy, or so the theory goes.

The question is: What will we actually do with this windfall?

A recent candy-themed mailer from my retirement account administrator suggested possible uses for my FICA savings. I could 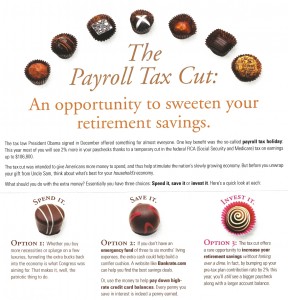 Ignoring the fact that the last two are simply different forms of the same option, it’s not hard to guess which the flyer suggests I choose. It warns me to “consider the state of Social Security,” that Congress might extend the FICA cut “into 2012 or beyond,” and that my Social Security benefits “could fall short tomorrow.”

Which brings me to the paradox of thrift, the observation popularized by John Maynard Keynes in his General Theory of Employment, Interest and Money. In essence, the paradox says that although individuals may be better off saving more when the economy is weak, if everybody saves, the total demand for goods and services falls and thus hurts the economy. In good times, the added savings push down interest rates, which in turn induce firms to borrow and sustain demand by investing in their businesses. In bad times, firms may not borrow, even at rock-bottom interest rates, and the economy suffers. Today businesses are sitting on an estimated $2 trillion of cash, not wanting to invest with the future uncertain. With that kind of money sloshing around, additional personal savings won’t help things.

So what to do with my $2,000 payroll tax cut? Maybe I should do the patriotic thing and go shopping. Problem is that we’ve already got pretty much everything we want. And I’m not getting any younger so perhaps I should add to my retirement savings.

My situation points out the problem with the payroll tax cut as economic stimulus. People like me are likely to save a sizeable part of the added take-home pay—in econ-speak, our marginal propensity to consume is low (not zero but perhaps on the order of three-fourths). More than 40 percent of the $110 billion in payroll tax cuts will go to households bringing in more than $100,000, the relatively low spenders like me. Just one-quarter will go to households with income under $50,000, those most likely to spend the additional cash (that is, they have a high MPC, approaching 1).

By contrast, more than half of the expired Making Work Pay credit went to households making less than $50,000 and just one-sixth to those with income over $100,000. As a result, the MWP probably had greater bang-for-the-buck than the FICA tax cut. But because the latter is nearly twice as big—$110 billion versus about $60 billion a year for MWP—the aggregate stimulus from the payroll tax cut is almost certainly larger.

My genes push me toward contributing to the paradox of thrift—even without the nudge from my retirement plan administrator. But maybe the tax cut I didn’t need and the government couldn’t afford should go to a charity that will spend it immediately and help boost the economy. The flyer left out that option.