The only fix for Washington Metro’s funding problems: regional cooperation

The Washington region's beleaguered metropolitan rail system, known locally as Metro, has a safety and management problem. It is so bad that Metro was forced to respond with SafeTrack, an ambitious (and disruptive) attempt to fit three years of repairs into one. But Metro also has a related funding problem, an issue the region's governments won't even discuss.

Metro, like other transit systems, gets funds from the federal government and state and local governments, along with fare and parking fees. However, Metro is unique because it operates in multiple states— Maryland, Virginia, and the District of Columbia (DC). Including localities, 10 governments are responsible for funding the system. None of the jurisdictions can pay for Metro on their own, and it has been impossible to get them on the same financial page. 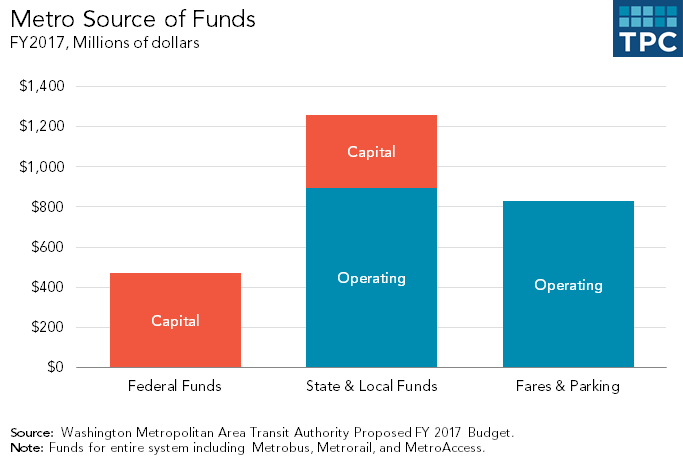 Further complicating the problem, Metro is the only major transit system in the US without dedicated funding. Systems with dedicated funding get (most of) their state and local revenue from a specific tax. For example, Massachusetts dedicates a portion of its sales tax revenue for Boston's MTA, Colorado does the same for Denver's system, and Cuyahoga County for Cleveland's. New York City pays for its transit system with a mix of dedicated taxes including city levies on home sales and a portion of the state's gas tax. Pittsburgh's system relies on Pennsylvania Turnpike tolls. In contrast, Metro's governing board sets spending formulas, divvies up costs among local jurisdictions, and then waits for each government to come up with the cash through its regular budget process.

This method of financing is problematic—and the results are unsurprising. A 2005 report on Metro funding noted, "the current system tends to peg costs to a level driven by the jurisdiction least willing or able to contribute." That report recommended replacing the ad hoc system with a regional dedicated sales tax. It argued that sales tax revenues would be driven in part by economic activity generated by Metro, though it also said a payroll or property tax were options. Presciently, the report warned of a "downward spiral" without dedicated funding: ongoing funding gaps would create dangerous conditions, delays, and eventually reduce ridership. The report has since sat on a shelf gathering dust.

But let's be clear: That report warned against both process flaws and funding gaps. Now, current calls for dedicated funding come as Metro needs billions more to get the system out of the financial hole that the 2005 report predicted.

The real challenge is getting all of Metro's governments, each with a range of other priorities, to support the region's transportation system. Maryland and Virginia stretch well beyond the Washington metro region, and neither the Republican governor of Maryland nor the Democratic governor of Virginia mentioned Metro’s funding problems in his 2016 state of the state address. (DC's mayor did, though.)

What about the other funds? Many Metro advocates want the federal government to increase its contributions because its employees are so reliant on Metro (42 percent of riders at peak times are feds). But while the federal government funded two-thirds of original construction, it currently treats Metro like all other transit systems and only provides formula-based grants that pay for roughly half Metro's capital costs but none of its operating costs.

What about raising fares? It is a bit hard to compare transit systems because fare structures vary, but Metro charges between $1.75 and $5.90 per trip (depending on length and time of day), compared with lower flat fares of $2.75 in New York, $2.25 in Chicago and Philadelphia, and $2.10 in Boston. Only San Francisco's range of fares are as high. Notably, New York gets a larger percentage of its revenue from fares than Metro but that's because it has many more riders. Metro's ability to raise revenue from fares is limited by the fact that it’s already losing riders—down to 2004 levels—without a fare hike.

If Metro is to remain viable, the local governments that have benefited so much in terms of both transportation and economic development will have to pick up the tab, and probably through some form of dedicated funding.