According to recent news reports, Congressional Democrats are considering watered-down versions of two measures from last year’s Build Back Better Act. The alternative minimum tax on the global book income of large corporations would allow a deduction for current investment expense, and the global intangible low-income (GILTI) reform would continue to allow cross-country pooling of foreign income and tax credits.

Levying a single global minimum tax that conforms to the OECD/G-20 Pillar 2 model would be simpler and raise revenue more efficiently than imposing two weaker global minimum taxes. And, by fully aligning GILTI with Pillar 2, the US would take the lead role in preventing the “race to the bottom” in global corporate taxation.

The minimum tax on global book income, which would apply only to large public corporations, responds to public concerns over companies that report substantial shareholder profits but little or no taxable income. But most book-tax differences derive from companies’ response to tax incentives enacted for specific policy purposes.

The largest difference between book and tax income is cost recovery – the rate at which companies deduct the cost of investment expense – which in 2019 totaled $217 billion. Financial accounting requires businesses to deduct investment costs in line with assets’ declining productivity. But tax rules typically allow accelerated deduction of certain investment expenses to encourage investment. The current US policy of “100 percent bonus depreciation” generously permits full expensing for assets with tax lives of up to 20 years. 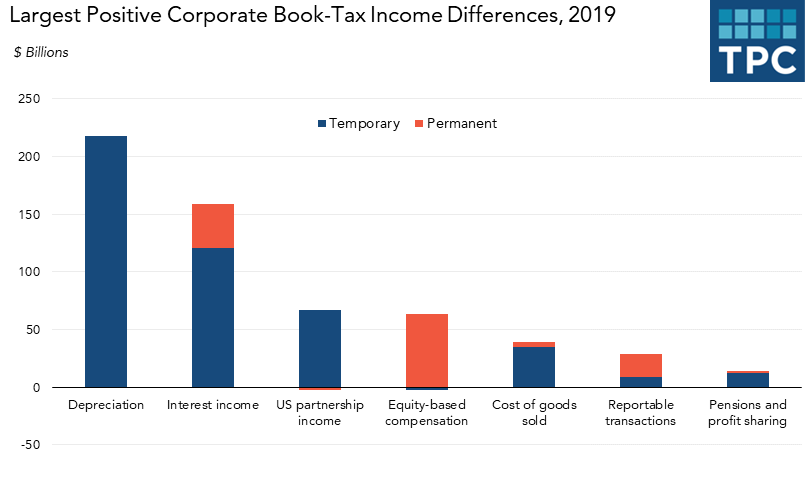 Book and tax depreciation differences are temporary—sooner or later, all investment costs are deducted from book or tax income.

But accelerated depreciation confers a real benefit in present value terms. The Joint Committee on Taxation estimates that the Build Back Better Act’s alternative minimum tax would raise about $320 billion in its first decade. Maintaining the deduction for capital expenses would sharply reduce those revenues, especially up-front.

Moreover, the scheduled phaseout of equipment expensing will reduce book and tax income differences without the need for a new alternative minimum tax. Beginning next year, bonus depreciation will begin to phase down by 20 percent a year until eliminated in 2027.

Another common method for multinational corporations to reduce their tax liabilities is shifting income to low-tax foreign jurisdictions. The “country-by-country” provision of the OECD/G-20 Pillar 2 model would prevent this by ensuring that corporations pay an effective rate of at least 15 percent in each country in which they operate.

Allowing cross-country pooling of foreign income and tax credits lets corporations use excess tax credits generated in high-tax countries to shield income reported in low-tax countries from US taxation. This “US last” policy benefits investment in both high-tax and low-tax foreign jurisdictions and reduces US revenues.

Prior revenue estimates for the Build Back Better Act show that limiting income and foreign tax credit pooling would raise about $70 billion over 10 years. That figure presumes increasing the GILTI rate to 15 percent and reducing the exclusion of a 10 percent on foreign tangible to 5 percent, in line with the Pillar 2 model. It also assumes eliminating tax preferences for foreign oil income – a sensible move to cut profit tax breaks for the petroleum industry.

If the US wants to lighten the tax burden on foreign income, it could adopt the Pillar 2 provision excluding 5 percent of foreign payroll from the global minimum tax. That would support investments in lower-tax jurisdictions with significant real activity, such as Ireland and Switzerland.

The US is currently the only country in the world with a global minimum tax, and its GILTI regime inspired the Pillar 2 blueprint.  Pillar 2 now calls for tighter restrictions to stop the global “race to the bottom.” Aligning GILTI with Pillar 2 would keep the US at the forefront of international tax innovation and help end the downward trend in corporate taxation.