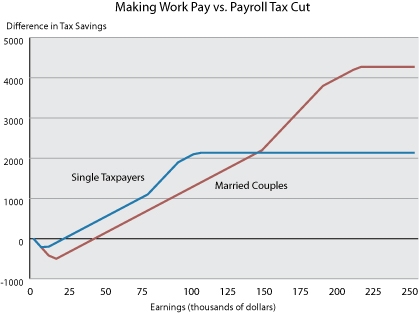 The Obama-GOP Deal: A Tax Hike for the Working Poor

Ever since the 2008 presidential campaign, President Obama has argued passionately for extending the Bush-era tax cuts for all but the richest 2 percent of Americans. His reasoning: the rich have fared spectacularly well over the past quarter century—incomes of the top 1 percent tripled in real terms—while incomes grew slowly or not at all for those further down the income scale. Now, in compromising with congressional Republicans, the president seems to have forgotten his own logic and agreed to big tax cuts for the rich and tax increases for the poor.

Why would the working poor pay more? Because the proposal would replace this year’s Making Work Pay (MWP) credit with a temporary reduction in the Social Security payroll tax from 6.2 percent to 4.2 percent. That’s a good deal for high earners, who got nothing from MWP (thanks to an income phaseout), but a bad deal for those making $20,000 or less. 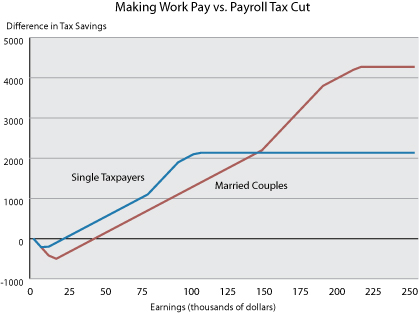 But you won’t get $400 from the payroll tax cut until your earnings reach $20,000; earnings have to be twice that high to yield the $800 that MWP gave to couples. So single taxpayers who earn less than $20,000 and married couples earning less than $40,000 will pay more in taxes under the payroll tax cut than under MWP (see graph). Like everyone else, those folks will keep their Bush-era tax cuts and everything else that would continue from 2010 into 2011. But because no other provisions would cut their 2011 taxes relative to 2010, those taxpayers are unequivocally worse off under the compromise in 2011 than under the tax law we have this year.

By contrast, the rich would get much better treatment from the swap of MWP for the payroll tax cut. If you’re single and earn more than $106,800 (the maximum earnings subject to Social Security tax in 2011), you’d pay $2,136 less in payroll taxes. Since you got nothing from MWP—it phased out for high earners—your net gain would be the full payroll tax savings. A couple in which both spouses earn more than the payroll tax cap would get double that much—$4,272.

If Congress and the president accept the compromise in its current form, a single worker earning $10,000 will see her taxes jump by $200 from this year to next—her $200 payroll tax cut replaces her $400 MWP. And a couple earning $25,000 would lose $300 as its $800 MWP morphs into $500 in payroll tax savings. Nothing else in the compromise tax agreement compensates for those losses.

At the top of the income distribution, the wealthy would not only keep all of their savings from the Bush-era tax cuts like everyone else but would get the additional $2,000+ in payroll tax savings ($4,000+ for a couple). And, should they happen to die during the next two years, their estates could save millions more because of the estate tax’s proposed higher exemption and lower rate.

The president can argue that he had to compromise to protect low- and middle-income Americans from a big tax increase in 2011. But the agreement turns on its head his repeated argument that we need to give more to the poor and ask more of the wealthy. No wonder Democrats in Congress are mad.