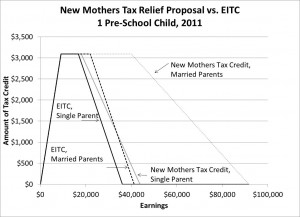 The Earned Income Tax Credit (EITC) provides a significant income boost to low-income single-parent families, but can severely penalize those families if the parent marries. A new plan from Brooklyn College economist Robert Cherry could sharply reduce that problem while sharply increasing benefits for families with young children – particularly those with married parents.

Analysts consistently find that the EITC encourages work and reduces poverty. Recent evidence shows that EITC receipt is correlated with improved health outcomes for infants. But the credit is not all roses. A major problem is the marriage penalty embedded within the structure of the EITC. Taken to the extreme, if a single mom of three children earns $17,090, her EITC totals almost $6,000. If she marries a partner who earns more than $5,210, her EITC falls by just over 21 cents for every dollar his earnings exceed that threshold. If he earns $32,970 or more, she loses her EITC entirely.

Many analysts, including myself, have offered ideas for reducing or eliminating marriage penalties in the EITC, essentially by developing an individual worker credit and a child credit, rather than combining the two.

Cherry’s New Mothers Tax Relief (NMTR) proposal is more modest and would focus on marriage penalties that the EITC imposes on single parents. The proposal would be limited to parents with at least one pre-school aged child. While the NMTR does not increase the maximum EITC benefit, it does increase the income range over which the maximum benefit applies. For single-parent families, the NMTR (solid gray line in graphic) would start to phase out at a slightly higher income level than the current EITC ($18,000 rather than $16,690) and the phaseout rate would decline from the current 15.98 percent to 12 percent. Ultimately, this means that single-parent families would continue to receive a credit until earnings reached almost $44,000, rather than just over $36,000. 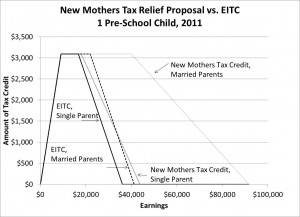 Benefits would rise much more for married couples. The proposal would increase the phaseout threshold for couples from not quite $22,000 to $40,000 and would reduce the phaseout rate from 15.98 percent to 6 percent to mitigate any remaining marriage penalties. Cherry contends that this would allow low-income parents to decide about marriage based on factors other than economic incentives in the tax code. At the extreme, the plan would allow a married couple to keep their entire EITC. For parents with 1 child, this is almost $3,100 – when under current law they would lose their EITC entirely.

This plan doesn’t go as far as others in separating out work and child incentives – and focuses on a very narrow population (families with a pre-school aged child), but it certainly provides for another way to improve the EITC for vulnerable low-income families by increasing benefits and reducing marriage penalties. The plan serves as a reminder that while the EITC continues to provide essential support to low-income families, there’s still room for improvement.