A new “dynamic” analysis (one that includes  macroeconomic effects) finds that  tax cuts consistent with what  the Trump Administration outlined in April would reduce federal revenues by about $8 trillion over the next decade. If the Administration outline is combined with a package of possible revenue-raisers suggested by the president, it would still lose nearly $4 trillion over the period.

The analysis, using the Penn-Wharton Budget Model (PWBM), closely tracks a projection released earlier this month by the Tax Policy Center.  However, the PWBM analysis found that tax plans consistent with the Trump Administration outline, with or without revenue raisers, would reduce revenue by even more than TPC estimated over either a 10-year or a 20-year period.

TPC initially scored a tax framework consistent with the president’s April outline using traditional scoring and a combination of two different dynamic models—a Keynesian model and a neo-classical model. The PWBM analysis is based on its own dynamic model.  Both TPC and Wharton looked at the tax cuts described in the Administration’s April document as well as various revenue-raisers suggested by the president’s campaign. 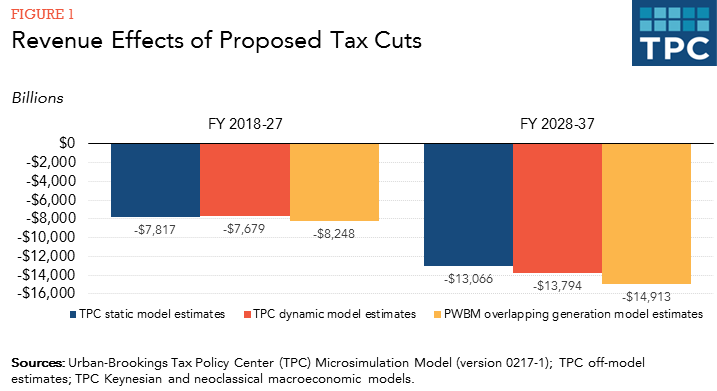 When revenue raisers are included, macroeconomic effects would increase the revenue losses over the first 10 years by about $0.5 trillion, to $3.9 trillion, and by about $1.3 trillion, to $7.0 trillion over the second decade (figure 2). 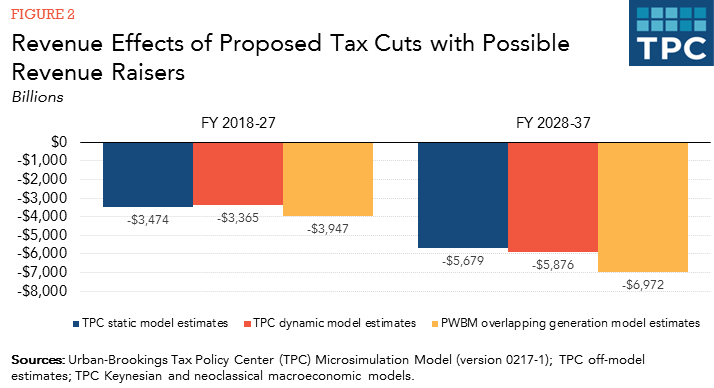 The PWBM estimates differ modestly from TPC’s dynamic models for two main reasons. First, TPC assumes that tax cuts boost the economy in the short-run as people and businesses spend some of their increased after-tax income, temporarily raising output relative to its potential level. The PWBM estimates do not incorporate that effect. Second, relative to TPC, the PWBM model projects that the tax changes--and the increased deficits they produce—have a greater impact on the overall supply of funds to firms, and therefore on firms’ cost of borrowing and their level of investment. The resulting lower capital stock also diminishes wage rates, which in turn tends to reduce labor supply. As a result,  PWBM estimates more negative economic effects—and resulting dynamic feedback on revenues–from Trump-like tax plans than do TPC’s dynamic models.

Despite these relatively small differences, the Wharton model confirms the overall result of TPC’s analysis: A tax plan consistent with the administration’s April outline would reduce federal revenues by trillions of dollars, even with dynamic scoring.