Climate change is a leading issue in the 2020 presidential elections, especially among Democratic voters.  According to a recent CBS poll, almost two thirds of Americans feel climate change is either a crisis or a serious problem. d, and no leading candidate supports a carbon tax.

Current Democratic front-runners, former Vice President Joe Biden and senators  Elizabeth Warren (D-MA), and  Bernie Sanders (I-VT), emphasize spending and regulatory measures to combat global warming.  Like most of the other candidates, they also call for elimination of tax subsidies for fossil fuels.  However, these subsidies are quite small, costing less than $3 billion per year.  Eliminating them is a logical first step to reduce carbon emissions, but more substantial measures are needed. 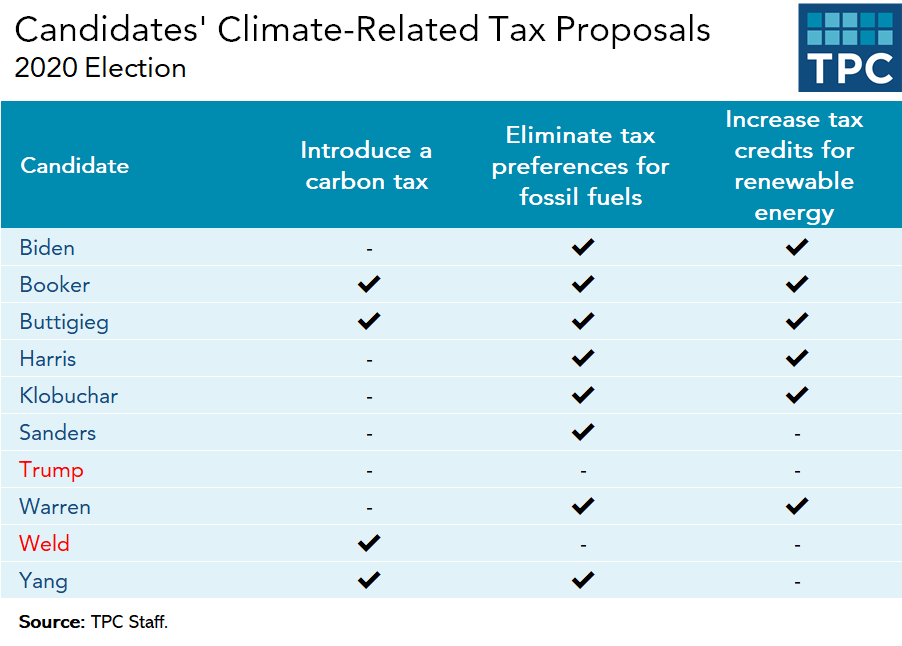 Most Democratic candidates would also extend or expand  a variety of tax incentives for conservation and alternative energy,  though few specify by how much.  These tax incentives are also modest at about $7.7 billion per year.  Even doubling their magnitude would have a minor near-term impact on carbon emissions.

Higher carbon prices are critical to shift consumption and investment away from fossil fuels.

The IMF estimates that a carbon price of $75 per ton of CO2 emissions is needed to limit temperature increases to 2 degrees Celsius; by contrast, the current world average carbon price is only about $2/ton. As a general rule, each $1 per ton carbon tax would increase gasoline prices by approximately $0.01 per gallon.

Most economists concur that a broad-based carbon tax is the most effective tool against global warming.  This simple excise tax is easier to administer than a cap-and-trade system and is also more comprehensive, since cap-and-trade is usually limited to the electricity sector.  Carbon taxes can also raise substantial revenue to help finance investment in alternative energy.

The most common critique of carbon pricing is that it is regressive: Lower-income households spend a higher share of their income on energy than higher-income households and are thus harder hit by increased fuel prices.  However, with a carbon tax this problem can be solved by rebating at least part of the revenues as dividends.

Encouragingly, candidates from both major political parties support a carbon tax. Most Democratic candidates, except for Rep. Tulsi Gabbard (D-HI) and, surprisingly, Sanders say they are open to the policy.  Sen. Cory Booker (D-NJ), former HUD Secretary Julian Castro, and former Rep. Joe Sestak espouse the measure without offering specifics. New entrant former New York City mayor Michael Bloomberg was an early supporter of a carbon tax, but has not yet presented a detailed climate plan.

Three Democratic candidates, mayor Pete Buttigieg, former Rep. John Delaney, and businessman Andrew Yang, have specific carbon tax proposals.  Their plans all feature gradually increasing rates, dividends, and “border adjustment” provisions, which would tax imports and rebate the tax on exports to avoid undermining U.S. competitiveness.  Buttigieg’s rate would start at $50 per ton and Yang’s at $40 per ton.  Delaney was a co-sponsor of the bipartisan Energy Innovation and Carbon Dividend Act, which has an initial rate of $15 per ton.

Sanders, who pioneered support for a carbon tax in the 2016 Presidential race, has since retreated from that policy in favor of “massively raising taxes on corporate polluters’ and investors’ fossil fuel income and wealth.”  Taxing the income or assets of corporations would be less effective than a carbon tax because it is far less likely to raise fuel prices to catalyze conservation by consumers and conversion to carbon-free energy sources by producers.

Among Republicans, former Massachusetts governor Bill Weld and former Rep. Joe Walsh claim to support a carbon tax.  Weld proposes repealing the motor fuel excise tax as an offset.  Since the social costs of road fuels, which include air pollution, accidents, and congestion, exceed those from carbon emissions, motor fuel excises beyond a carbon tax are warranted.  U.S. federal fuel excise taxes have been fixed at 18.4 cents per gallon for gasoline and 24.4 cents per gallon for diesel since 1993 and are the lowest in the industrialized world.

And of course, President Trump denies climate change and withdrew the U.S. from the 2014 Paris Climate Accord.

While Democratic presidential hopefuls sharply criticize Trump’s views on climate change, neither of the leading candidates supports the best tool for the job—a carbon tax.