Mega-IRAs are hot this summer, following a June 2021 report by the nonprofit news service ProPublica that revealed—based on leaked IRS files—that a handful of high-net-worth individuals have accumulated massive individual retirement account (IRA) balances. The congressional Joint Committee on Taxation also reported that in 2019 more than 28,000 taxpayers owned IRAs worth more than $5 million.

This week, University of Chicago law professor Daniel Hemel and I submitted a report to the Senate Finance Committee that showed how high-income taxpayers can, legally, amass mega-IRAs by “maxing out” 401(k) defined contribution (DC) plans, defined benefit (DB) plans, and investing in S&P 500 index funds or other publicly traded assets. Mega-IRAs are a problem created by laws that lavish excessive tax benefits on high-income individuals.

ProPublica spotlighted a $5 billion IRA amassed by PayPal founder Peter Thiel. He apparently stuffed his account with undervalued assets such as pre-IPO stock, a practice that could be illegal and calls into question the Internal Revenue Service’s enforcement efforts. However, the more important concern is the proliferation of legal massive IRA balances. Why does Congress allow high income taxpayers to amass these enormous accounts which, originally, were intended to help middle-income workers save for retirement?  And how could Congress limit the practice?

How can IRAs grow so big? Here is an example:

Imagine a law firm partner born in 1950. At age 35, she starts contributing the maximum amount to her 401(k) DC plan. The law firm matches her contributions.

(Today, the combined annual employee-employer contribution limit is $58,000 plus extra amounts for “catchups” by employees age 50 and older.) Workers can roll over their DC balances into an IRA when they change jobs or retire.

In 2000, after Congress repealed limits on combined DC and DB plans, our law partner also started contributing to a cash balance defined benefit plan. Traditionally, DB plans were standard pensions that promised to pay a pre-determined benefit at retirement. However, in recent years, these have rapidly been replaced by cash balance plans that look much like DC  plans. The benefit is expressed as a total account balance that the employee can roll over at departure or retirement, tax free, into an IRA.

Assume the law partner retired in 2015 at the age of 65 and deposited $5.2 million balance from her 401(k) and $2.5 million (the maximum balance allowed at the time) from her cash balance plan into her IRA. If she invested her 401(k) and, later, her IRA, exclusively in an S&P 500 index mutual fund, she would have accumulated an IRA balance of $18.6 million by August 2021. If she had made only 401(k) contributions without the additional cash balance contributions, her IRA balance would be $12.6 million. (You can find our calculations online.) 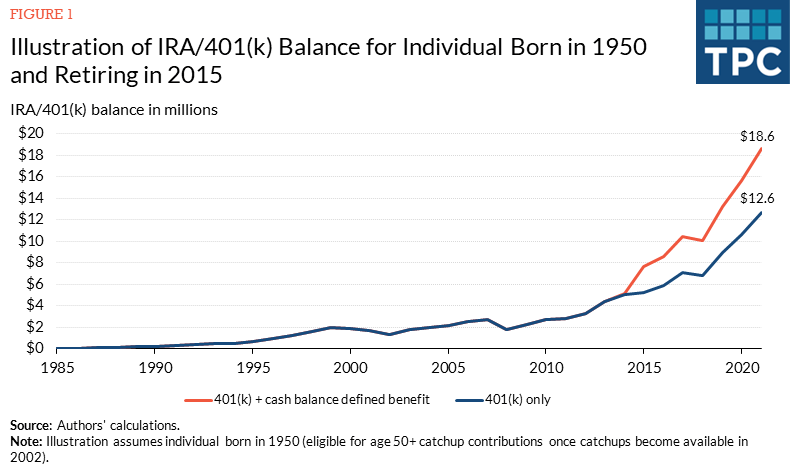 Our generous retirement tax rules have primarily benefited the wealthiest households, who can afford to put aside large amounts of wage income. 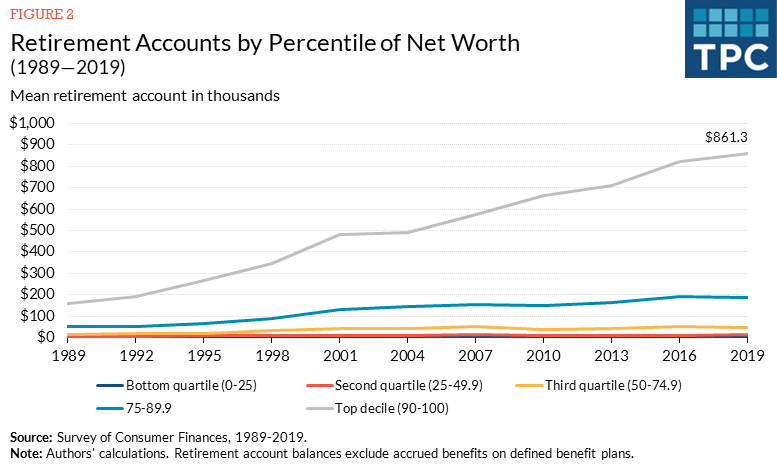 How can Congress end the proliferation of mega-IRAs by the very wealthy? It could establish an overall combined asset limit for all retirement plans, including IRAs, defined contribution plans, and defined benefit plans, an idea first proposed by the Obama-Biden administration.

That plan rightly recognized that mega-IRAs are just one type of mega-retirement plan. Capping only IRAs (or only Roth IRAs) would arbitrarily penalize individuals who took rollovers rather than leaving their balances in an employer-sponsored plan (or decided to pay tax on a traditional-to-Roth conversion rather than delaying conversion until a more opportune time). Worse yet, an IRA-specific or Roth-specific reform would simply shift the problem to other accounts that currently feed into mega-IRAs.

Congress also should prohibit IRAs from holding non-publicly traded assets, which would prevent stuffing and other forms of self-dealing.

Mega-IRAs undermine the progressivity and revenue-raising potential of the federal income tax. But they are a symptom of an even more serious disease: a retirement savings system that disproportionately favors the rich. Instead of simply treating the symptom, lawmakers should cure the disease—one largely caused by Congress’s own choices.