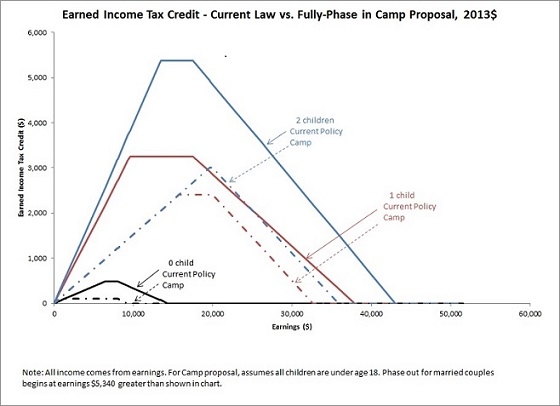 House Ways & Means Committee Chair Dave Camp’s tax reform plan would make many changes to the two major refundable tax credits aimed at assisting low- and moderate-income working families—the earned income tax credit (EITC) and the Child Tax Credit (CTC).  It isn’t easy to keep track of all the moving parts, but it appears that Camp’s plan would benefit some married couples with young children at the expense of some childless workers, single parents, and families with older kids.

Camp would cut the maximum EITC, make 18 year old children and full-time students ages 19 – 24 ineligible for the credit, and eliminate personal exemptions. At the same time, he’d increase the standard deduction and permit some low-income single parents to take an extra deduction. And he’d make the child credit more generous for many families – increasing the size of the credit and adding a year of eligibility.

Today’s EITC provides a maximum of about $500 for workers without qualifying children; Camp’s proposal would reduce that to $100 ($200 if married). Camp’s plan would also reduce the EITC for workers with one child from $3,250 to $2,400, and from $5,400 to $4,000 for families with at least two children. And the additional boost for families with three children that exists under current policy (a maximum credit of $6,200) would disappear. In order to qualify for today’s EITC, a child must be either under age 19 or under 24 and a full-time student. Camp would lower the age limit to under age 18 and eliminate eligibility for older full-time students. 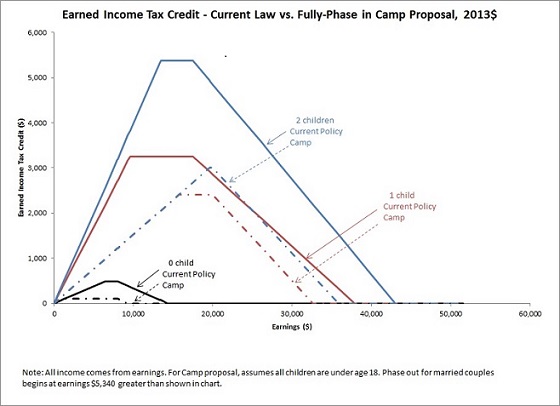 Once Camp’s plan is fully phased in, people would start to owe federal income tax at about the same income level as today – but subsidies for single parents would drop and their taxes would rise. Married couples with children would receive reduced total credits relative to current policy, until their income reaches about $40,000. Then they’d get a bigger check or owe less tax under Camp’s proposal.

Some workers without qualifying children would also get bigger refunds. But the few who are currently eligible for an EITC greater than $100 ($200 if married) would get a smaller credit.  Low-income families with students aged 19-24 or 18-year-old children would lose the sometimes-substantial support they receive from today’s EITC.

At the same time, Camp would increase the CTC from $1,000 per child to $1,500 and make it available for 17-year olds (today’s CTC applies to children under age 17). Although today’s CTC starts phasing in once earnings exceed $3,000 (a limit currently scheduled to increase to more than $13,000 after 2017), Camp’s proposed CTC would start to phase in at the first dollar of earnings, just as the EITC does under current policy. I’ve discussed this simplification in TaxVox, before.

In addition, the Camp proposal would eliminate the personal exemption ($3,900 per person in 2013) but increase the standard deduction. Singles would be able to deduct $11,000 and couples could deduct $22,000 before calculating their taxes. Under current policy, the standard deduction is $6,100 for a family without children, $8,950 for a single parent, and $12,200 for a married couple. 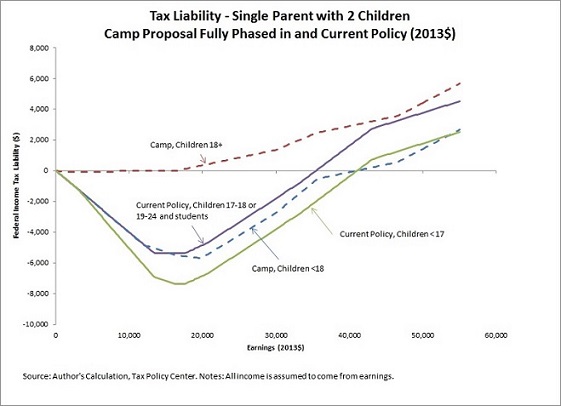 Married couples with two children would receive a smaller EITC under Camp’s proposal, offset partially by the larger CTC. Once their earnings reach about $40,000, those couples would owe less – a product of lower tax rates. 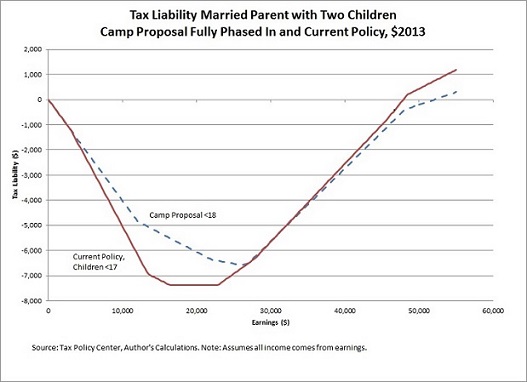