Donald Trump would permit businesses to immediately expense new investment.  As a result, they could deduct the full cost of plant and equipment at the time of purchase, rather than over the life of the property.  But Trump pushes too far by also permitting businesses to deduct their interest costs.  He would return us to the 1980s, when tax shelters were fueled by highly accelerated tax depreciation and deductible interest (along with light taxation of capital gains).

The combination of expensing and interest deductions allows businesses to profit from the tax law—not by making productive investments but simply by arbitraging two provisions of the revenue code. Here’s how it would work for a real estate investor under Trump’s tax plan (thanks to Berkeley tax economist Alan Auerbach for the example):

Let’s say you are in Trump’s proposed 15 percent business tax bracket and own a rental house that needs a new garage door.  The door costs $1,000 and lets you raise the rent by $50/year. You pay $150 in cash and borrow $850 at a 5 percent interest rate.  Trump would let you write off the full cost of the door in the year you buy it. (The example simplifies the transaction in a couple of ways: It assumes the door does not lose value in the near term, and it assumes an investment that breaks even before tax because the rate of return and the cost of capital are the same.) 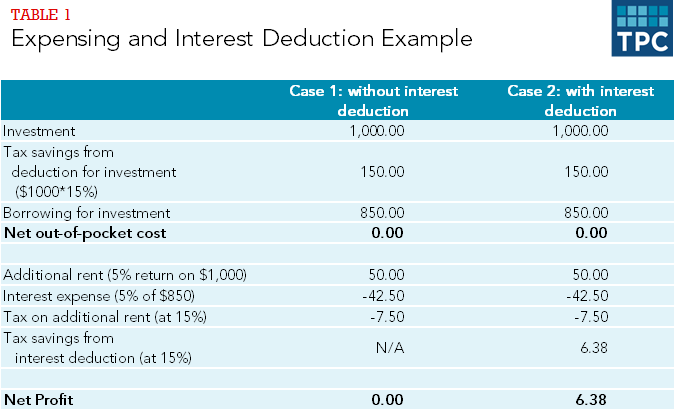 Thus, the interest deduction makes an unprofitable investment profitable.  And, with a few more tweaks, an aggressive investor could easily leverage this investment further—and create a perpetual tax shelter.

Even worse than this example, in which the investment wouldn’t lose money before tax, is an investment that loses money before tax that becomes profitable after (because of tax subsidies).  This was the recipe for the notorious “see-through office buildings” bereft of tenants that were made profitable in the early 1980s by the combination of highly accelerated depreciation and interest write-offs. Public outrage about these egregious, and wasteful, tax shelters was a primary motivation for the Tax Reform Act of 1986.

To avoid these distortions, serious proposals to allow expensing, such as those by President George W. Bush’s Advisory Panel on Federal Tax Reform, House Speaker Paul Ryan (R-WI), and 2016 GOP presidential hopefuls Jeb Bush and Marco Rubio all would limit interest deductions.  An analysis of the issues by the Congressional Budget Office does the same.

Some favor expensing, which they contend would allocate capital more efficiently, although others object on fairness grounds.  But the combination of expensing and interest deductibility is neither efficient nor fair and would drain the Treasury of revenues.  Tax reform should not take us back to the bad old days of wasteful tax shelters, with see-through office buildings and even bigger budget deficits.

Homeowner Kelvin Hoford, left, signs a form for inspector Waldo Faura after an inspection of his home Monday May 5, 2008 in Miami. Above the pair is Hoford's reinforced garage door. (AP Photo/Wilfredo Lee)