The IRS published its annual trove of tax statistics Internal Revenue Service Data Book, 2018 on May 20. On its face, the volume is a collection of statistics. But it tells a powerful story of declining enforcement and in-person taxpayer services resulting from a shrinking budget and staff.

While the growing use of electronic filing and third-party data reporting can ease compliance, budget and staff cuts have been so draconian that the agency has been forced to do less with less. That gives a green light to tax cheats, jeopardizes the entire voluntary compliance system, and risks the failure of still-antiquated tax processing systems.

The Data Book is over 80 pages of facts and figures, charts and tables. And all that raw data make it possible to spot trends. One fact to remember: Nearly all the data are based on fiscal years (FY), not calendar or tax years. Don’t ask.

Few of the year-to-year changes are dramatic, but cumulatively and over time, they reinforce concerns about the tax collector’s effectiveness.

The IRS audited 0.6 percent of over 150 million individual income tax returns, the audit rate down 47 percent from 2010 and the lowest coverage level since 2002. As the table below illustrates, the drops were sharpest for the highest income taxpayers. Filers with positive incomes under $25,000 were audited at a higher rate than filers reporting incomes up to $500,000. 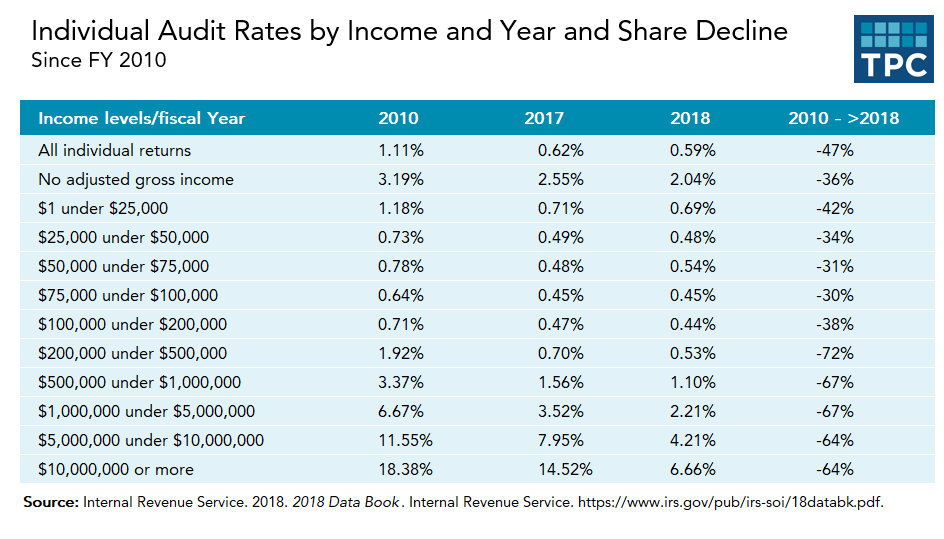 From 2010 to 2018, the number of corporate audits (excluding S-corporations) fell by nearly half while the percentage of corporate returns audited fell by more than a third to 0.9 percent.  Less than half of the growing number of giant corporations—those with assets of $20 billion or more—were audited in 2018. By contrast, in 2010, the IRS audited nearly all of them. Only 0.2 percent of partnerships or S-corporations were audited in 2018, half the share in 2010.

The IRS received 152.9 million individual returns in 2018. Roughly nine-in-ten were electronically filed, the share growing by more than a quarter since 2010. While a majority of individual returns are filed by paid preparers, the share is declining as more taxpayers turn to commercial software. In 2018, preparers filed just under 52 percent of returns, down from 60 percent a decade ago.

Between filers using paid preparers and those using do-it-yourself desktop or online software, over 90 percent of individual taxpayers receive some form of help in filing their tax return.

The number of taxpayers visiting TACs for face-to-face help fell by 11 percent from 2017 and by 54 percent from 2010 as the IRS has reduced the number and services of its walk-in sites and encouraged taxpayers to use the web or telephone for help. Visits to the IRS.gov website were twice what they were in 2010. And a growing share of phone calls is being handled by automation rather than live staffers.

Some GOP Members of Congress argue that technology should enable the IRS to do more with less if it improves management and customer service, audits more efficiently, and targets resources more strategically. But the Data Book shows just how difficult that is.