In a new analysis, the Tax Policy Center finds the tax provisions of the Inflation Reduction Act (IRA)  are highly progressive. Taxes would rise by $6,060 (0.3 percent of after-tax income) in 2023 for households in the top 1 percent—with incomes greater than about $1 million. Households in the top 0.1 percent (those with over $4.4 million of income) would bear an additional burden of $41,580 (0.4 percent of after-tax income), TPC estimates.

The IRA includes a mix of tax cuts and tax increases that are incorporated into TPC’s analysis. Most of the revenue is generated by the corporate minimum tax and the tax on stock buybacks, as well as an extension of the limitation on excess business losses of noncorporate taxpayers. The bill would also implement several clean energy tax breaks for businesses and individuals. TPC’s analysis does not include the potential benefits of drug pricing reform or other spending provisions.

TPC’s primary analysis also excludes a provision of the bill that would extend for three years the enhanced premium tax credit (PTC) for Affordable Care Act (ACA) insurance plans. However, we did produce a supplemental table for 2023 only that includes the PTC alongside the IRA’s other tax provisions. 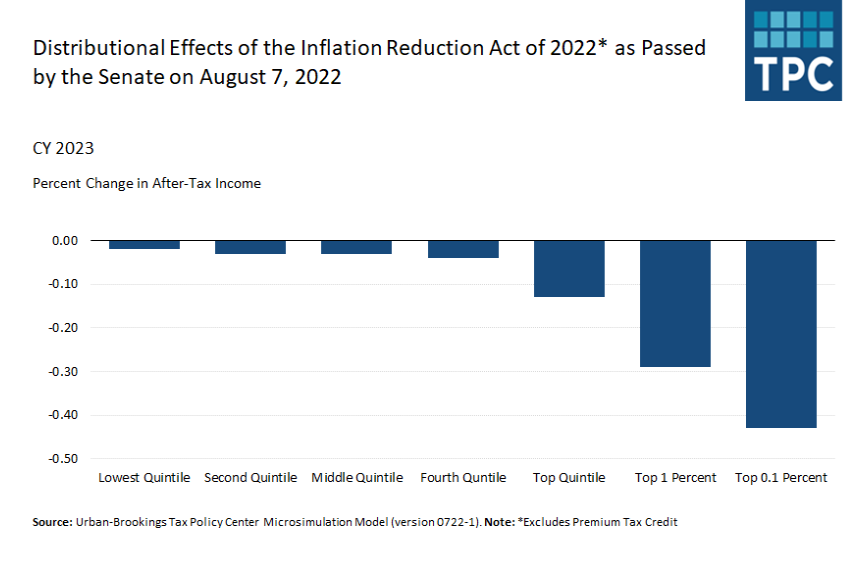 Historically, TPC has treated the PTC as a spending program and generally excluded it from tax analyses. For example, TPC’s analyses of Build Back Better and 2016 presidential candidate tax plans excluded PTC provisions. TPC has on occasion partnered with the Urban Institute Health Policy center to incorporate the PTC into distributional analyses.

Without the PTC included, those in the lowest quintile would experience a negligible impact, while middle-quintile taxpayers, on average, would see a tax burden increase of $20, less than .05 percent of their income. (Taxpayers in the lowest quintile have income below $30,500 and those in the middle-income group have income between $60,000 and $106,000.)

On the campaign trail and since taking office, President Biden has pledged not to raise taxes on those making less than $400,000. The Administration says its promise applies only to taxes people pay directly.

Looking at just those direct taxes such as individual income taxes and payroll taxes, the IRA would modestly reduce or not change tax burdens at nearly all income levels in the three years TPC modeled (2023, 2027, and 2031). The only exception: Taxpayers in the top 1 percent in 2027 who would pay more because the bill extends the limitation on pass-through business losses from 2026 through 2028. Under a broader view of tax incidence, families with incomes below $400,000 would bear some of the burden of corporate tax hikes through lower wages or lower returns to stock ownership, particularly in retirement accounts, even if they don’t pay more in direct taxes.

Much of the disagreement reflects the long-standing debate among economists and others on the burden of corporate tax increases on capital and labor. TPC—like the Joint Committee on Taxation, Treasury, and the Congressional Budget Office—allocates the burden of a corporate tax increases between those who receive investment income and workers, though the allocation shares differ slightly among the three organizations. Capital income recipients bear most of the burden in all of them.

In the past, TPC has produced tables estimating the number of households in each income group who would pay more or less in tax. The type of tax provisions in this bill make it challenging to produce precise estimates and those tables are not included in TPC’s analysis of the IRA. The Joint Committee on Taxation recently produced such an analysis.

Still, as TPC shows, the additional tax burden from the IRA would be progressive, mostly falling on the top 1 percent of taxpayers.