President Trump and lawmakers such as Sen. Marco Rubio (R-FL) agree that the child tax credit should be improved. They might consider increasing the credit for families with young children. My Urban Institute colleague Julia Isaacs and I have designed one way to do that: an additional $1,000 young child tax credit (YCTC) for children under age 5. If enacted in 2017, the credit would add $18 billion in benefits on top of the $57 billion the CTC will already provide. To direct benefits at even very low-income families, the credit would start as soon as a parent has some earnings. And it would phase-in rapidly. In our new analysis, we consider this and other options which demonstrate the effect of changing important credit rules.

The child tax credit (CTC) provides the same $1,000 maximum benefit for both younger and older children. But parents of very young children—a critical age for healthy development-- earn less and spend more on child care and other expenses.

Early childhood presents a critical time in human development, laying the foundation for achievements during school years and influencing longer-term health and education outcomes. Beyond benefits for children, additional family income during a child’s younger years also have been linked to improved adult health and later employment success.

At the same time, those families are likely to spend more on child care and other costs. By age 5, the vast majority of children are in full-time kindergarten or prekindergarten programs, most of which are tuition-free.

On average, eligible families in the lowest 40 percent of the income distribution would receive an extra $1,300 while higher income families would receive smaller benefits. 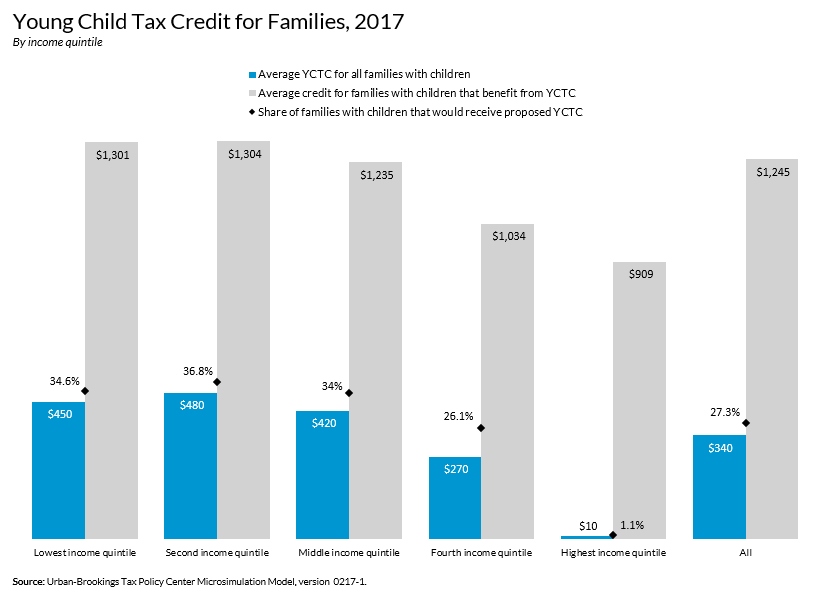 This proposal would build on the success of the CTC, which annually lifts about 3 million people out of poverty, half of them children. Just like the CTC, the YCTC would not require all parents in the home to work, nor would it require parents to have child care costs. As a result, families with one worker and one stay-at-home parent could qualify for the credit, as could families with two earners or single-parent earners, even if their jobs are intermittent or part time.

Like other tax credits that provide low-income parents with cash, the YCTC would empower parents to make their own choices for their children. It represents one way to lift incomes for families with very young children.