How would candidates’ spending plans affect our GDP projections?

The Tax Policy Center, with the help of the Penn-Wharton Budget Model (PWBM), found that in the short-run Hillary Clinton’s tax increases would slow the economy and Donald Trump’s tax cuts would stimulate it. In the longer-term, the effects would reverse: Trump’s tax plan would slow the economy by increasing deficits and driving up interest rates while Clinton’s would reduce the deficit, which would lower interest rates and boost growth.

But those estimates ignored the candidates’ spending plans.  Once you consider the magnitude of Clinton’s spending proposals, her fiscal plan would slow the economy in the long run. While Trump’s spending cuts would offset a fraction of his revenue losses, his overall tax-and-spending plan would still significantly harm the economy over the long run by driving up deficits that would crowd out private investment.

The Committee for a Responsible Federal Budget has tallied the candidates’ spending promises and estimated that Clinton would raise spending by $1.65 trillion while Trump would cut spending by $1.2 trillion over the next decade. The PWBM allows users to raise or lower spending (excluding Medicare and Social Security) by 5 percent across the board. That would be about $1.25 trillion over the next decade, within the ballpark of each candidate’s spending change.

An important caveat is that the simulations don’t reflect any direct macroeconomic effects of the candidates’ specific spending proposals. Rather they assume that eliminating any spending helps the economy by reducing deficits and increasing spending has the opposite effect. For example, both candidates argue that their proposed increases in spending on infrastructure would boost productivity and thus economic growth, but the simulations don’t capture that. (We hope to be able to measure the dynamic effects of spending in a future version of the model.)

Clinton’s tax plan would, by itself, modestly reduce output over the short run—by about 0.25 percent in 2018—but it would eventually boost GDP slightly by cutting the deficit. By 2036, output would be about 0.6 percent higher than under current fiscal policy. However, if she also raised spending by 5 percent, she’d neutralize the beneficial effects of higher revenues on the deficit.  By 2036, GDP would be about 0.5 percent below current policy levels. The negative economic effects result from Clinton’s higher marginal effective tax rates on high-income households and large businesses, which would tend to discourage work, saving, and investment.

By contrast, Trump’s tax proposals alone would boost the economy in the short run by lowering tax rates and increasing after-tax incomes.  Over time, though, rising deficits would crowd out private sector investment, depressing the economy.  By 2036, GDP would be more than 4 percent below baseline levels.

Trump’s proposed spending cuts would reduce the short-run stimulus slightly and cut the long-run deficits, but they’d still be very large.  Even $3 trillion of cumulative spending cuts would pale in comparison to the $15 trillion in tax cuts over the 20-year period in Trump’s plan.  As a result, GDP would still fall by 3 percent compared with current policy by 2036.

The bottom line is that Clinton’s tax and spending plan doesn’t worsen (or improve) our unsustainable fiscal path, but it would hurt the economy by raising marginal tax rates.  Trump’s plan lowers taxes a lot, but the long run gain from those improved economic incentives would be more than offset by its very large deficits.  His spending increases would reduce the long run damage modestly, but his overall plan would still do substantial harm to the economy. 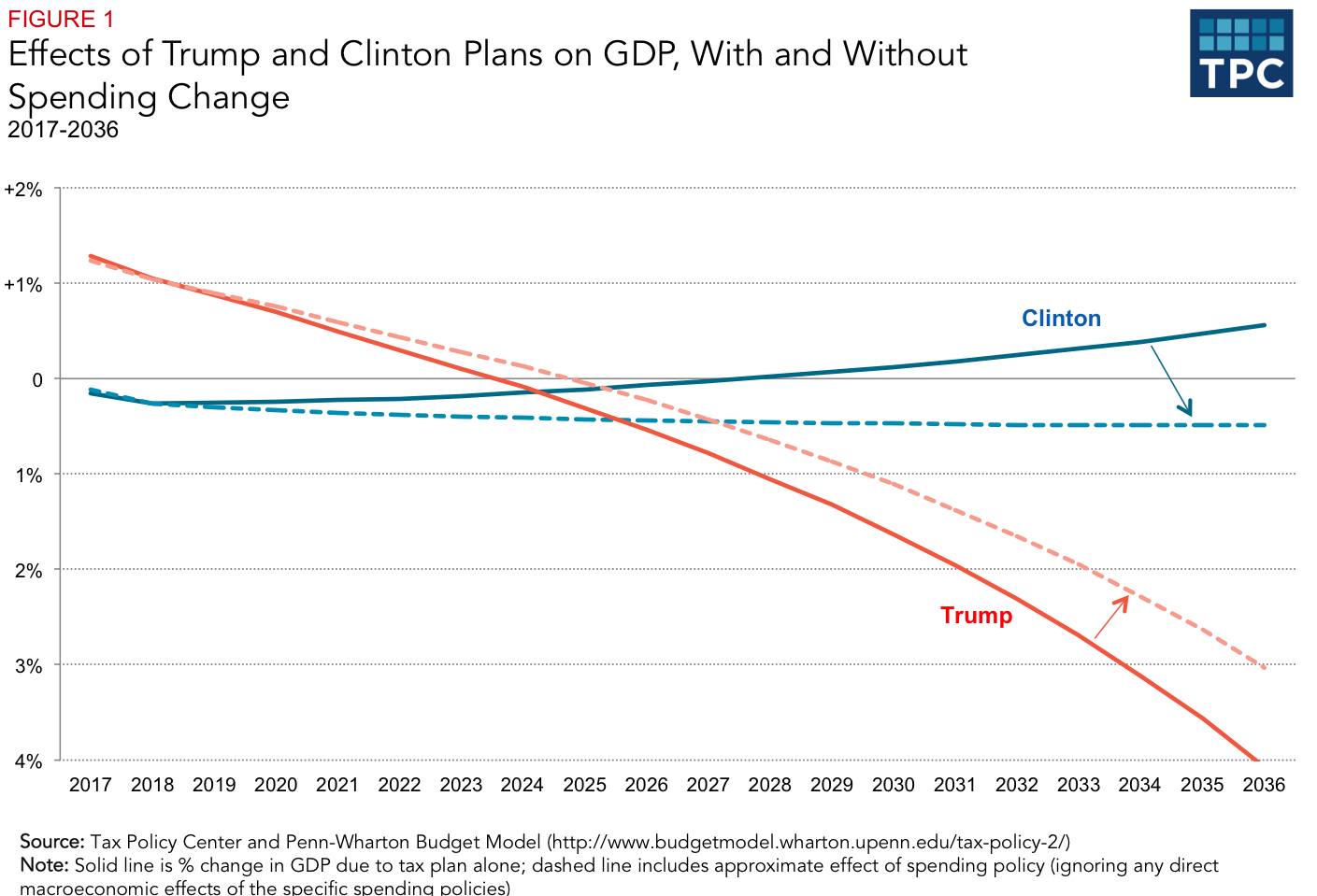