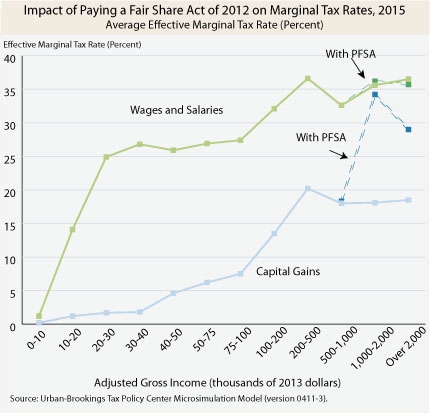 How Would the Buffett Rule Affect Marginal Tax Rates?

The Paying a Fair Share Act of 2012 (PFSA) – Congress’ first crack at legislating the Buffett rule – would apply a broad-based 30 percent minimum tax for those earning more than $1 million a year. We have a pretty good idea of how this would affect people’s taxes: it would substantially raise them but only for relatively few high-income taxpayers.

Of course, economists don’t just want to know the total tax burden; we also care about incentives. So we looked at how PFSA would affect the amount of tax people pay on their next dollar of income – that is, their effective marginal tax rates.

Since effective marginal rates depend on all taxes applied to work effort and capital gains and include the effects of tax preferences, the statutory rate brackets in the income tax are only part of the story. Wages face an additional 7.65 percent payroll tax on both the employee and employer, so payroll taxes contribute an extra 14.2 percentage points to the marginal tax rate on pretax earnings (15.3 divided by 107.65, the gross wage including the employer tax). However, earnings above the Social Security wage threshold face only the Medicare Hospital Insurance (HI) tax, which is 1.45 percent on both employees and employers, for a total rate of 2.86 percent (2.9/101.45). And earnings above $125,000 (or $250,000 for joint filers) get hit with an additional 0.9% surtax starting in 2013.

Meanwhile, capital gains and qualified dividends face a top rate of only 15 percent – plus an additional 3.8 percent on net investment income for high earners beginning in 2013, courtesy of health reform. Various phase-ins and phase-outs in the tax code complicate things further; for example, taxpayers in the AMT exemption phase-out range face effective marginal rates several percentage points higher than their statutory rates on both earnings and capital gains. 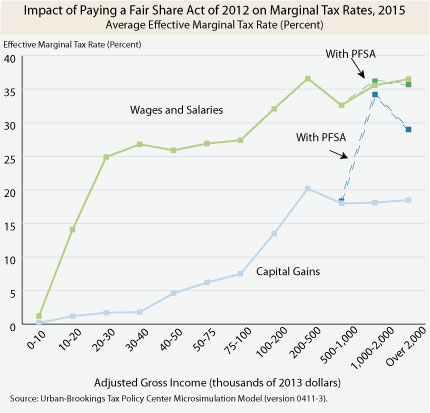 The average effective marginal rate on wages actually decreases slightly for those with very high incomes. While this seems counterintuitive, it actually makes sense. Between income and payroll taxes, most high-income taxpayers already face a marginal rate above 30 percent on their wages. If they end up on PFSA – most likely because their capital gains pull their average tax rate down below 30 percent – their 30 percent marginal rate on earnings will actually be less than they were paying before.

Yes, raising taxes on a couple hundred thousand of the highest-income Americans sounds awfully appealing. But narrowly based tax increases often come at an efficiency cost. And in this case, the most likely source of efficiency loss comes from discouraging realizations of capital gains.