How The Tax Cuts and Jobs Act Evolved

The Tax Cuts and Jobs Act that Congress passed on Dec. 22 was quite different from the tax cuts proposed by the Trump Administration last April and the Unified Framework that the White House and top congressional Republicans agreed to in September. While the overall direction did not change—the plan started and ended primarily as a big tax cut for businesses—it underwent two significant alterations: It got much smaller and it became far less regressive.

Make no mistake, the final version of the TCJA still will reduce federal revenues by more than $1 trillion over the next decade. And high income households still benefit the most. But this figure, created by my Tax Policy Center colleague Joe Rosenberg, shows how much the plan evolved from April to December. 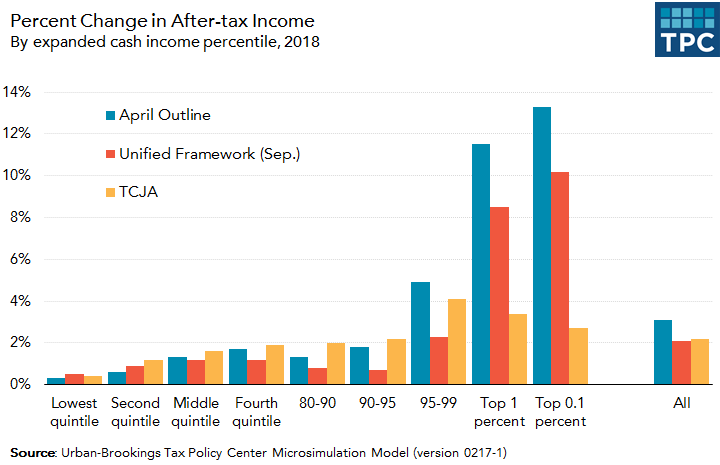 At each step along the way, the net tax cut shrank—mostly by slimming down benefits for the highest-income households. The Tax Policy Center estimated that the Administration’s April outline, a one-page summary based largely on proposals that candidate Trump had made during his presidential race, would have cut taxes by $7.8 trillion over 10 years. By September, Hill and White House negotiators downsized the net tax cut to about $2.4 trillion. The final bill will reduce revenue by about $1.3 trillion over the coming decade, even after including its effects on the overall economy, TPC estimates.

Because the April outline included so few details, TPC’s analysis filled in many gaps by including Trump campaign promises. This was especially challenging because the outline specified no revenue-raisers to offset its large tax cuts. Still, the plan provided a general idea of what the president wanted the tax bill to look like.

After GOP congressional leaders started to play a direct role in the development of a bill, benefits for those at the top of the income distribution started to shrink. The Unified Framework GOP leaders and Trump aides worked out last September would have reduced the 2018 tax cut for the top 1 percent   from 11.5 percent of after-tax income to 8.5 percent, still an average of nearly $130,000. The top 0.1 percent would have seen their tax cut fall from 13.3 percent of after-tax income to 10.2 percent, or $722,000 on average.

Once the plan became a bill—the TCJA—net tax cuts for high-income households got even smaller. TPC estimates the final conference agreement will cut taxes in 2018 for the top 1 percent by 3.4 percent of after-tax income—an average of $51,000-- and for the top 0.1 percent by 2.7 percent—an average of $193,000.

Tax cuts for low- and middle-income households changed much less through the process. While the TCJA includes many moving parts—tax rate cuts and increases in the standard deduction and the child tax credit partially offset by elimination of personal exemptions-- the overall size of the tax cut for households making less than $25,000 barely changed. The April plan would have cut their taxes by 0.3 percent of after-tax income (about $40 on average); The September version would have bumped their tax cut to 0.5 percent; and the final bill landed at 0.4 percent, or about $60 on average.

Similarly, the plan did not evolve much for middle-income households (those making between about $49,000 and $86,000). In the April outline, their 2018 tax cut would have averaged about 1.3 percent of after-tax income, or $760. In September, it ticked down to 1.2 percent. But the final bill is a bit more generous. It will raise after-tax incomes of middle-income households by an average of 1.6 percent, or $930.

Overall, after-tax incomes will rise by 2.2 percent in 2018 under the final TCJA, or about $1,600. That’s roughly the same as the September framework, but significantly lower than the 3.1 percent boost in after-tax incomes contemplated by the Trump Administration in April.

The effect of turning off those individual income tax cuts would be dramatic. Households making less than $155,000 in 2027 would get no tax cut at all, on average. And more than half of all households would pay more in taxes than under the pre-TCJA, mostly because the new law permanently shifts to a less generous method for indexing the tax code for inflation. As a result, nearly 83 percent of all the benefits of the TCJA in 2027 would go to the top 1 percent of households.

In the broadest sense, the TCJA retained the basic character of the earlier plans, but it changed in two big ways: becoming much smaller and far less generous to the highest income households.

President Donald Trump joined by Senate Majority Leader Mitch McConnell of Ky., Vice President Mike Pence, Speaker of the House Paul Ryan, R-Wis., and other members of congress, speaks during an event on the South Lawn of the White House in Washington, Wednesday, Dec. 20, 2017, to acknowledge the final passage of tax overhaul legislation by congress. (AP Photo/Carolyn Kaster)