How Much State Spending Is On Autopilot?

In his 2005 State of the State address, California Governor Arnold Schwarzenegger sounded like he was being chased by the new Terminator T1000:

It is on automatic pilot. It is accountable to no one. Where will it all stop? How will it stop unless we stop it?

He was not talking about a threatening cyborg but rather a school funding formula added to the California constitution by ballot initiative (Proposition 98) backed by teachers and other public school advocates.

Governors and lawmakers have long decried constitutional and statutory formulas, federal grant requirements, and court rulings that limit how they can spend money. But how much of a state’s spending is actually out of current governors’ and legislators’ control? How much have past budget decisions limited states’ “fiscal democracy”? 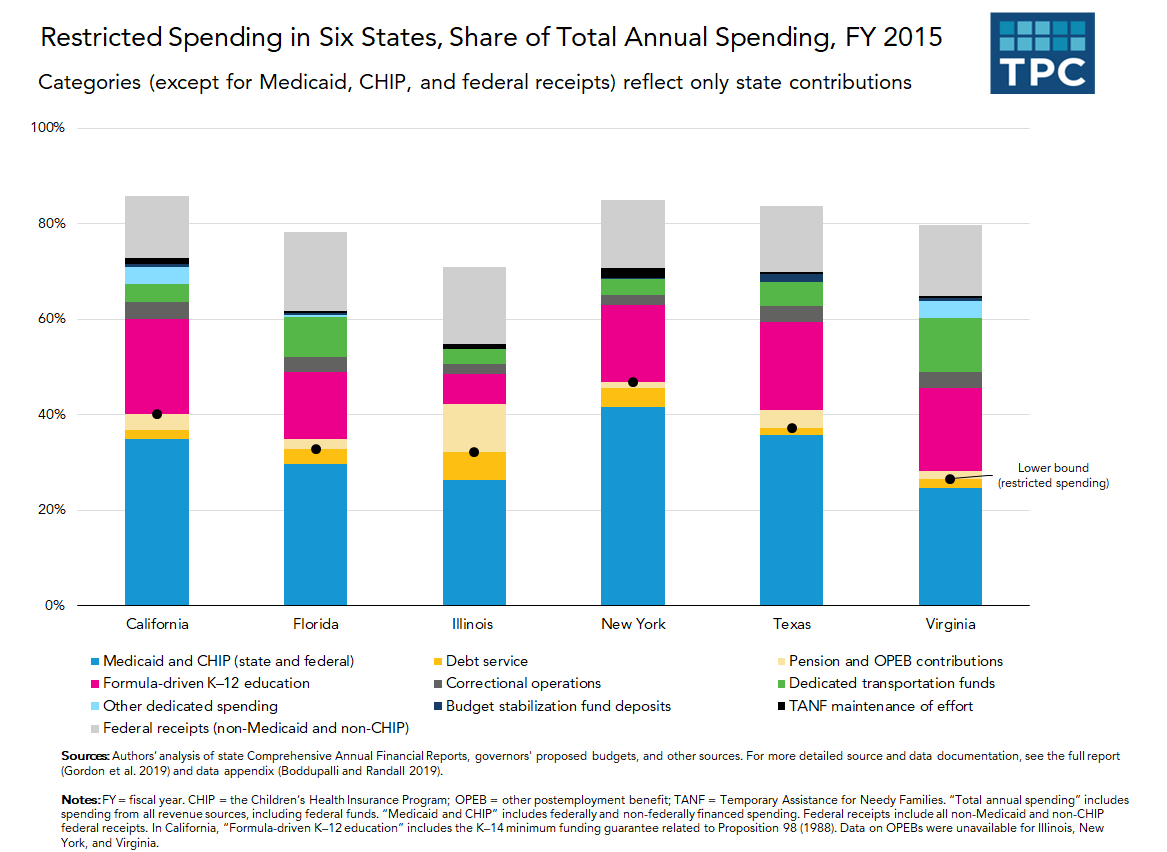 Why the big range? Because spending constraints fall along a continuum of flexibility, and there is no consistent definition of mandatory spending across states. The federal government explicitly defines “tax expenditures” and “mandatory spending” in law and reinforces these concepts through the annual budget process. But most states do not rigorously or transparently assess the long-term cost of those tax breaks and spending programs that are either fixed in size or grow automatically without policy changes.

All states treat debt service and Medicaid as required spending. But many are more flexible when it comes to how they treat spending subject to federal rules, state revenue earmarks, or court decisions. Still other spending may be tied to changes in caseloads and costs. For example, state contributions to public employee pension plans and the portion of K-12 education funding determined by a fixed formula may be considered restricted. But it depends on an individual state’s constitution and any court decisions that apply.

Then there’s politics. A consistent theme in our interviews with state budget officials was “everything is flexible, especially in a crisis.” But even if the law technically allows it, elected officials may be reluctant to take the heat for changing the rules, reducing built-in program growth, or raising taxes. For example, few elected officials want to be seen as cutting K-12 education, although failing to budget for forecasted enrollment and cost increases happens all the time.

In all, we discovered that governors and legislators must weave their way through a multifaceted and complex maze of restrictions, not just to adopt a budget and make appropriations, but also to set new priorities.

In the end, something’s got to give. Our results suggest that when so much of state budgets are fixed, programs such as poverty assistance or higher education get squeezed. State leaders also may be reluctant to undertake new initiatives, such as expanding pre-K education, that require either new money or shifting funds from more protected programs. State budget restrictions may beget more restrictions, as advocates push lawmakers to lock in spending or earmark revenues for their favored programs.

How can elected officials break this cycle? They could start with more disclosure. Public budgets should show by program the inflation-adjusted cost of maintaining existing services given projected caseload and price increases and project how that cost changes over time. Although state budget officials routinely assemble the information they need for such current services budgets, few prepare multiyear projections, use them as a baseline from which to assess new policies, and make them public.

Only by consistently examining budget commitments over time can governors, legislators, and voters understand how much flexibility state governments have to meet short- and long-term priorities, plan for the future, and, most importantly, respond to new challenges and opportunities.