This post is part of the Tax Policy Center’s new series, Tax Line, which digs into the data behind the day’s most pressing tax policy issues. You can read all posts in this series by clicking on the topics tag, TaxLine, at the bottom of this post.

In a new report, the Tax Policy Center has analyzed three ways to reform the mortgage interest deduction (MID), including a proposal to replace the MID with a 15 percent non-refundable credit for mortgages of $500,000 or less (the deduction is currently available for mortgages of $1 million or less).

Overall, the plan would raise taxes by about $240 billion over 10 years. It would on average benefit low- and moderate-income households while boosting taxes on higher-income taxpayers. More households would benefit from the credit than the current deduction, though the average subsidy would be substantially lower than with today’s deduction.

A credit would shift the benefits to lower income taxpayers because the current deduction provides no subsidy to taxpayers who do not itemize. In addition, deductions are less valuable for taxpayers in lower tax brackets. For instance, someone in the top 39.6 percent bracket would save $39.60 on every $100 in interest payments while someone in the 15 percent bracket would save only $15. A 15 percent credit would be worth the same to all borrowers whose mortgage is below the cap.

Our paper also found significant variation in how the new credit would affect households in different states. 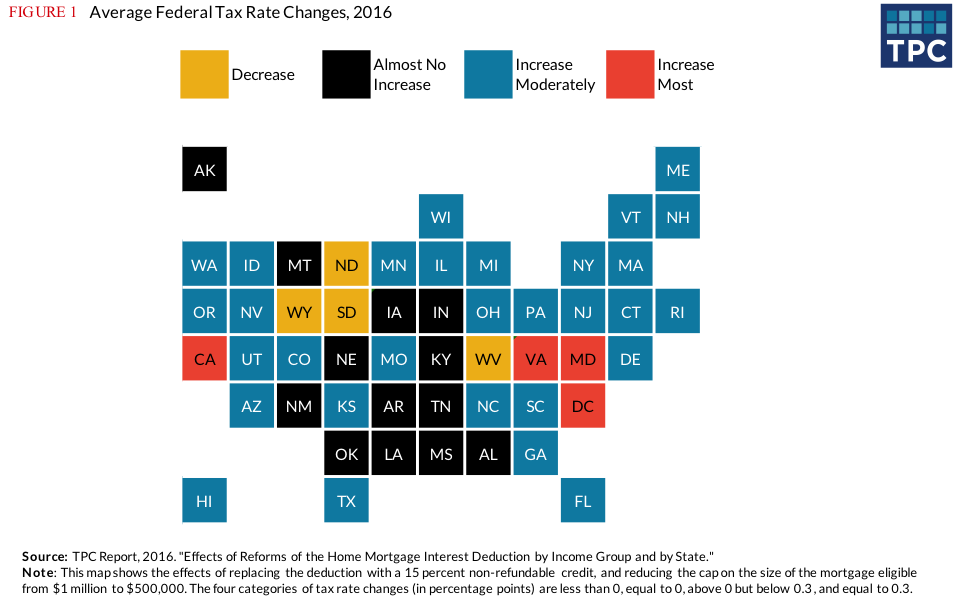 Where would borrowers pay more? The reform would increase the average amount of federal tax in 46 states and the District of Columbia. However, taxpayers in Wyoming, West Virginia, South Dakota and North Dakota would pay less federal tax than under current law.

Where would they pay the most? Taxpayers in California, Maryland, Virginia, and the District of Columbia would on average face the largest federal tax increase –about 0.3 percentage points.

We also show the distribution of federal tax change by income group within each of nine selected states in 2016: California, Illinois, Kentucky, Michigan, New York, Oregon, Texas, Utah, and Wisconsin. We find similar distributional patterns in these states as in the nation as a whole.

However, we found important differences among the states we analyzed. For example, in high-income states such as California and New York, a greater percentage of taxpayers would pay more in federal tax and a smaller percentage would enjoy a tax cut. In Texas, which has no state income tax, fewer residents itemize. Thus, fewer would lose if the mortgage interest deduction is replaced.

There are real questions about whether mortgages should be subsidized at all, especially for higher-income homeowners. But if we are going to continue to use the tax code to reduce borrowing costs, a credit might be a better alternative than a deduction.

In this Tuesday, June 9, 2015, file photo, a "Sold" sign is displayed in the yard of a newly-constructed home in the Briar Chapel community in Chapel Hill, N.C. (AP Photo/Gerry Broome, File)