Federal tax and spending policies are worsening the problem of economic inequality. But the tax breaks that overwhelmingly benefit the wealthy are only part of the challenge. The increasing diversion of government spending toward income supports and away from opportunity-building programs also is undermining social comity and, ironically, locking in wealth inequality.

Many flawed tax policies are rooted in the ability of affluent households to delay or even avoid tax on the returns from their wealth. By putting off the sale of assets, wealth holders can avoid tax on  capital gains that are accrued but not realized. At death, deferred and unrecognized capital gains are exempted from income tax altogether because heirs reset the basis of the assets to their value on the date of death.

While individuals and corporations recognize taxable gains only when they sell assets, they may immediately deduct interest and other expenses. This tax arbitrage makes possible everything from tax shelters to the low taxation of the earnings of multinational companies.

Recent changes in the law have further eroded taxes on wealth. Once, the US taxed capital income at higher rates than labor income, today it does the reverse. For instance, the 2017 tax law sharply lowered the top corporate rate from 35 percent to 21 percent, but trimmed the top individual statutory rate on labor earnings only from 39.6 percent to 37 percent.

In theory, low- and middle-income taxpayers could use these wealth building tools as well. But  the data suggest that the path to wealth accumulation eludes most of them, partly because they save only a small share of their income. Even those who do save $100,000 or $200,000 in home equity or in a retirement account earning, say, 5 percent per year may never reap more than $1,000 or so in tax savings annually.

To understand what has been happening to the relative position of the non-wealthy, we need to dig a little into the numbers. Economics professor Edward Wolff of New York University discovered that in 2016 the poorest two-fifths of households had, on average, accumulated less than $3,000 and the middle fifth only $101,000. Trends in debt tell part of the story. From 1983 to 2016, debt grew faster than gross assets for most households--except for those near the top of the wealth pyramid. 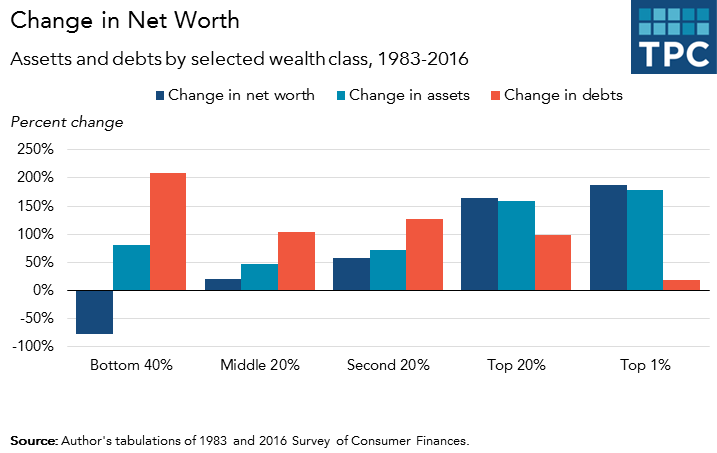 It’s not that the government doesn’t aid those with less means. But almost all government transfers support consumption, and only indirectly promote opportunity.

Consider the extent to which the largest of these programs, Social Security, has encouraged people to retire while they could still work.

Because of longer life expectancy and, until recently, earlier retirement, a typical American now lives in retirement for 13 more years than when Social Security first started paying benefits in 1940.That’s a lot fewer years of earning and saving, and a lot more years of receiving benefits and drawing down whatever personal wealth they hold.

Annual federal, state, and local government spending from all sources, including tax subsidies, now totals more than $60,000 per household—about $35,000  in direct support for individuals.Yet, increasingly, less and less of it comes in the form of investment or help when people are young. Thus, assuming modest growth in the economy and those supports over time, a typical child born today can expect to receive about $2 million in direct assistance from government. In the meantime, however, government has (a) scheduled smaller shares of national income to assist people when young and in prime ages for learning and developing their human capital, (b) reduced support for their higher education in ways that  has now led to $1.4 trillion of student debt being borne by young adults without a corresponding increase in their earning power, and (c) offered little to bolster the productivity of workers.

Any number of programs could have a place in encouraging economic mobility, among them beefed-up access to job training and apprenticeships for non-college goers; wage subsidies that reward work; subsidies for first-time homebuyers in lieu of subsidies for borrowing; a mortgage policy aimed more at wealth building; and promotion of a few thousand dollars of liquid assets in lieu of high-cost borrowing as a source of emergency funds — you get the point. However, in one recent study, I found that federal initiatives to promote opportunity—many in the tax code—have never been a large fraction of government spending or tax programs and are scheduled to decline as a share of GDP.

It would be naïve to assume that fixing any of this will be easy. Republicans seem committed to reducing (not increasing) taxes on the wealthy, while Democrats reflexively support redistribution to those less well off, even when their proposals reduce incentives to save and work. But until we fix both sides of this equation, don’t expect government policy to succeed in distributing wealth more equally. After all, simply leveling wealth from the top still will leave the large number of households holding zero wealth with zero percent of all societal wealth.