How do the Republican presidential candidate tax plans stack up against one another? Who has the biggest tax cut? How do their plans affect people in different income groups?

The Tax Policy Center has analyzed the plans of four candidates—Donald Trump, Ted Cruz, Marco Rubio, and Jeb Bush. At 30,000 feet, the proposals have much in common. All are huge tax cuts of history-making size. All lavish most of their benefits on high-income households. Three of the four (Trump excluded) move in the direction of a consumption tax. And all would lead to enormous increases in the federal debt absent big cuts in spending that none of the candidates have yet specified.

But look more closely and you can see some substantial differences in scale.

First, take a look at the distribution of tax benefits:

Cruz, who would replace today’s income-based tax system with a consumption-based model, would cut  taxes by an average of about $6,000, or 8.5 percent of after-tax income--more than any other candidate. But he’d also skew those tax cuts more sharply to those with the highest incomes. In 2017, those in the top 1 percent would get an average tax cut of more than $400,000, or 26 percent of their after-tax income, while middle income households would see an average tax cut of about $1,800, or 3.2 percent of their income.

By contrast, Jeb Bush and Marco Rubio have proposed relatively more modest overall tax cuts (through still enormous by historical standards). Rubio, who has also proposed a consumption-based system, would cut taxes by an average of $3,100 in 2017, or 4.4 percent of after-tax income. Those in the top 1 percent would get an average tax cut of about $163,000, or 10.4 percent of income, while middle-income households would get a tax cut of about $1,400, boosting their after-tax incomes by 2.5 percent.

None of the plans would cut taxes for the lowest-income 20 percent of households by more than a few hundred dollars, or more than 1.9 percent of their after-tax incomes.

Here is a look at the revenue story: 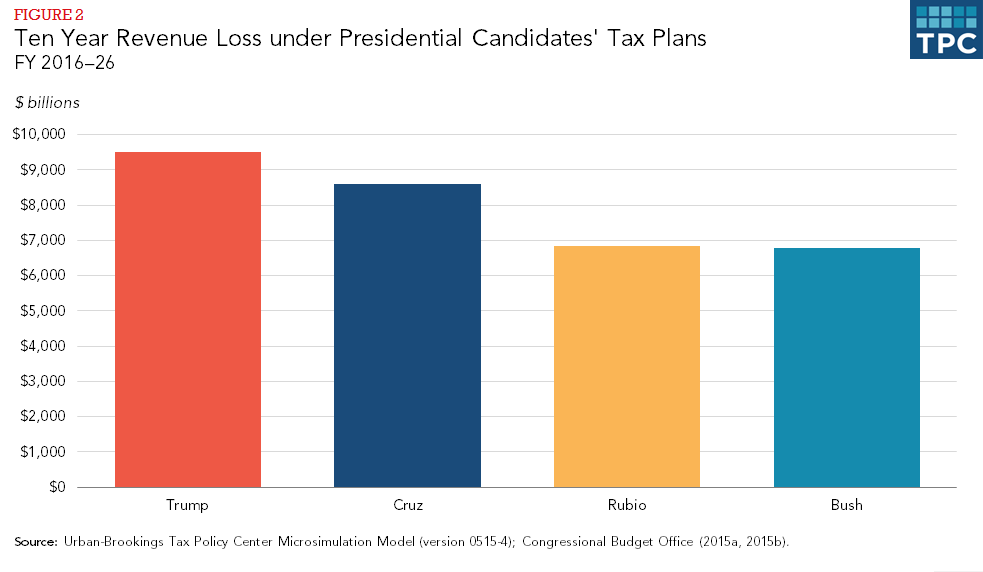 While all four plans would result in huge tax cuts, and big increases in the federal debt without offsetting spending reductions, their details and effects vary substantially. Trump would cut taxes by $9.5 trillion over the next decade, followed closely by Cruz, who is proposing an $8.6 trillion tax cut. By contrast, Rubio and Bush would each cut taxes by about $6.8 trillion.

All these tax cuts, and the resulting revenue losses, would be unprecedented in U.S. history. And each would deliver most benefits to those at the top of the economic food chain. But in both design and in consequences, these plans are quite different from one another. And those contrasts are worth noting.