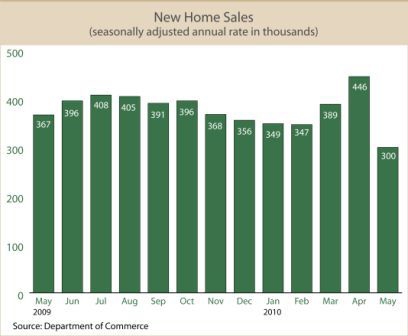 The Homebuyers Credit: Is It Better to Laugh or Cry?

For two years, the homebuyer credit has been in the running for Washington’s worst tax policy idea. Now, new evidence about this bit of legislative bilge suggests it may be time to retire the trophy.

The Commerce Department reports the new homes market collapsed in May after booming in March and April (chart). Why? Well, in early spring, in response to an intense marketing campaign by the real estate and mortgage industries, tens of thousands of buyers accelerated home purchases to take advantage of this sweet tax give-away (as much as $8,000 for some buyers) before the credit expired on April 30. Then, just as most sentient economists predicted, the market dried up. Actually, it didn’t just dry up. It became the Death Valley of housing. 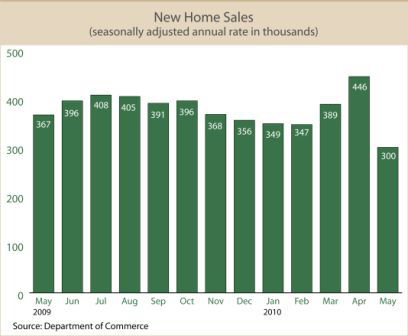 Monthly new home sales (which are seasonally adjusted) had been running about 350,000 in early 2010. As buzz about the credit heated up, purchases spiked to about 390,000 in March and to 450,000 in April. Then, the credit disappeared and so did the buyers. Sales in Mayplunged to 300,000, the lowest level in four decades.

As the chart shows, this was--entirely unsurprisingly--exactly the same pattern we saw when the credit was first scheduled to expire at the end of 2009: A big run up in sales in October and November followed by a sharp decline thereafter.

Total amount of permanent job creation from this timing change: pretty close to zero. Cost to taxpayers: $12.6 billion just through last February—even before the latest buying frenzy. What a deal!

As my Tax Policy Center colleague Ted Gayer has been warning, at least 85 percent of those buyers would likely have purchased a home anyway. For them, the credit was a pure gift--courtesy of a government running a $1.4 trillion deficit.

But that’s not all. Yesterday, the Treasury Department’s inspector general issued its second report on homebuyer credit fraud. And the scams are worthy of a Carl Hiasson novel. Among the lowlights: 1,295 prisoners received $9.1 million in credits for houses they claimed to buy while incarcerated. Two hundred forty-one were serving life sentences at the time. Hiasson—the bard of two-bit Florida hustlers-- will be pleased to learn that almost two-thirds of these frauds occurred in his home state, where ripping off federal taxpayers appears to be about as common as shuffleboard.

And it wasn’t just cons running the hustle. Sixty-seven different people claimed the tax break for one house. More than 2,500 got almost $18 million for homes they bought before the credit was effective. In all, the IG unearthed 14,132 people who received erroneous credits of $17.6 million.

The hardest bit to swallow is not so much that the homebuyer tax credit is a boondoggle. It is that it was a totally predictable waste of money. Economists warned Congress in 2008 that the credit would do little more than shift timing decisions by a few months. But lawmakers ignored the advice again and again. Remarkably, the Senate may be about to give buyers still more time to close on homes they put contracts on before April 30. That way, they can squeeze the last few dollars out of a failed credit.