Democratic leaders have pledged to combat higher petroleum prices due to Russia’s invasion of the Ukraine. Shying away from a Russian oil boycott, they have proposed a federal gas tax holiday to cushion US motorists from rising pump prices. But that policy would do little to benefit consumers while worsening fiscal imbalances, air pollution, and global warming.

Instead, policymakers could embrace higher oil prices as the necessary cost of both containing Russia’s aggression and protecting the environment. Focusing on the longer term, they could design a plan to gradually increase taxes on motor fuels to reflect their full environmental cost and help speed electrification of the vehicle fleet.

Although gas prices have recently surged, in real (inflation-adjusted) terms they are only slightly above their average value over the past decade. And even in the unlikely event that suspending the 18.4 cent per gallon federal gas tax was fully passed through to consumers, it would lower current pump prices by less than 6 percent. 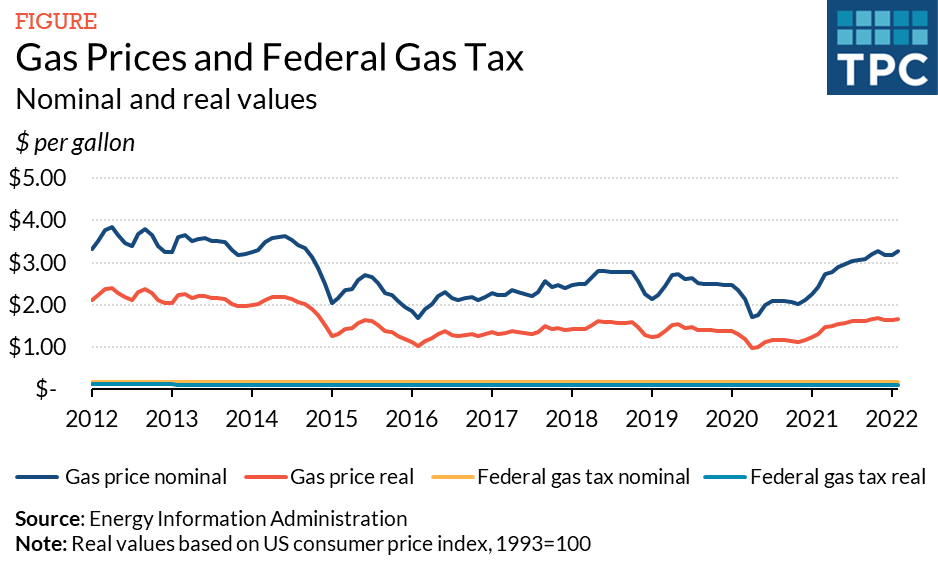 However, a gas tax holiday would seriously impair the federal Highway Trust Fund, which is dependent on general revenue transfers to retain solvency.  Nonetheless, under current policy the Committee for a Responsible Federal Budget projects the Trust Fund will be insolvent by 2027.

Federal taxes on gas and diesel account for 82 percent of Highway Trust Fund revenues.  Those taxes have been fixed at $0.184 and $0.244 per gallon, respectively, since 1993, and have therefore lost almost half their real value.  Restoring that value to 1993 levels would raise fuel prices by about 5.5 percent and generate about $16.5 billion in annual revenue – most of the money needed to rebalance the Trust Fund.

But road traffic produces large social costs beyond wear and tear on infrastructure, including air pollution, global warming, traffic congestion, and accidents. The International Monetary Fund estimates the annual cost to the US of these effects is more than $200 billion. While congestion and accidents may be best addressed by local policies, federal fuel taxes are well suited to correcting environmental costs.

Combined federal and state fuel taxes currently average $0.49 per gallon of gasoline and $0.57 per gallon of diesel. This is roughly equivalent to a $50 per ton of carbon dioxide equivalent tax.   At that carbon price, US greenhouse gas emissions from motor fuels total $48 billion per year.

The air pollution from road traffic—mostly the diesel used by commercial vehicles--inflicts another $57 billion in human health damages per year. Correcting this would require raising the gas tax by about $0.15 per gallon and the diesel tax by $1.60. Clearly, the higher diesel excise would have to be phased in to reduce economic shocks.

However, paying for road construction and maintenance with a VMT only makes sense once fuel prices fully reflect their environmental costs. Until they do, it’s always preferable to get the additional benefits of lower air pollution and carbon emissions by increasing fuel taxes. And if local policies don’t control congestion and accidents, the efficient level of fuel taxes is even higher.

Road fuel taxes are currently the only major federal tax policy addressing climate change.  Federal tax credits for renewable energy investment and production expired at the end of 2021.  The Build Back Better bill proposed extension of those programs, as well as other green credits, but that legislation has languished.

Despite the political temptations created by the current spike in petroleum prices, a federal gas tax holiday would be both fiscally and environmentally irresponsible. Instead, Congress should gradually phase in higher fuel taxes to charge motorists for the environmental damage they cause. And only then it should introduce a weight-indexed VMT to finance road infrastructure investment.