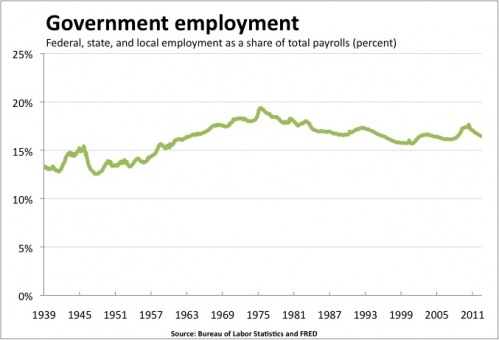 Has the Government Been Growing or Shrinking? Employment Edition

My recent post on government size prompted several readers to ask a natural follow-up question: how has the government’s role as employer changed over time?

To answer, the following chart shows federal, state, and local employment as a share of overall U.S. payrolls: 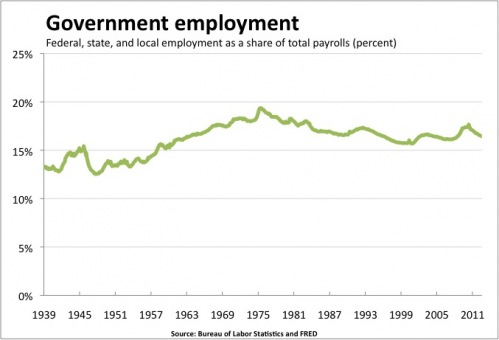 Employment thus tells a similar story to government spending on goods and services: if we set the late 1990s to one side, federal, state, and local governments aren’t large by historical standards; indeed, they are somewhat smaller than over most of the past few decades. And they’ve clearly shrunk, in relative terms, over the past couple of years. (But, as noted in my earlier post, overall government spending has grown because of the increase in transfer programs.)

P.P.S. As reader Ernie Tedeschi notes, this measure doesn’t capture government contractors. So any change in the mix of private contractors vs. direct employees will affect the ratio; so will changes in the fraction of private employees who show up in the payroll survey. This is another reason why focusing on spending metrics may be better than employment figures.