The Gulf Between the Presidential Candidate Tax Plans Is Historic

When it comes to how their tax proposals affect households of different incomes, the contrast among the remaining presidential candidates is simply stunning.  Calling it a gap hardly does it justice. It is an ocean of difference.

How do you even describe the contrast between one candidate (Ted Cruz) who’d raise the average after-tax incomes of the highest income 0.1 percent of households by almost $2 million and another (Bernie Sanders) who would slash their after-tax incomes by more than $3 million? These estimates are courtesy of my colleagues at the Tax Policy Center.

It is no surprise that the two Democrats, Sanders and Hillary Clinton, would raise taxes on average, or target most of their tax hikes at high-income households. And it is hardly a shock that the leading Republicans, Donald Trump and Ted Cruz, would cut taxes overall and lavish most of the benefit on the highest-income households. That, after all, is what Democrats and Republicans usually do.

But the magnitudes. Oh my.

This chart tells the story: 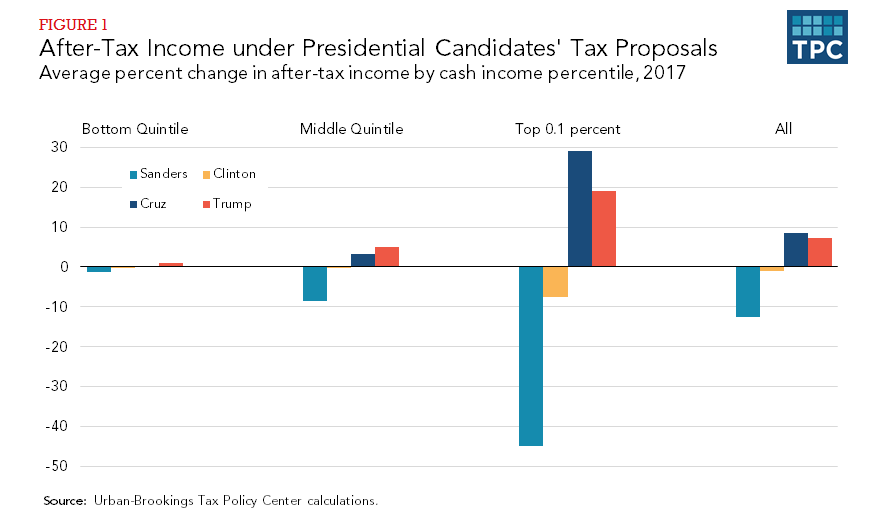 Clinton would raise taxes on all households by about 1 percent of after-tax income, but the gap among the others is so big that you can barely see her $1 trillion tax increase in the figure. TPC could not model GOP hopeful John Kasich’s tax ideas since he has not yet specified important details such as all his proposed tax rates.

No matter how you slice it, the contrasts are unmistakable. Take a look at what happens to taxes for middle-income households (those making between about $45,000 and $81,000). Trump would cut their taxes by nearly 5 percent of after-tax income and Cruz would cut them by a bit more than 3 percent. By contrast, Sanders would raise them by nearly 8.5 percent. Clinton would effectively leave the taxes of middle income households unchanged.

The next chart shows their proposed tax changes for those middle-income households. It is in dollars instead of percentages, but it tells the same story. Sanders would raise taxes for those in the middle by about $4,700 while Trump would cut them by $2,700—a remarkable $7,400 swing. Cruz would boost their after-tax incomes by about $1,800. The gap is even more startling when you consider that these households pay an average of only $8,600 in federal taxes. 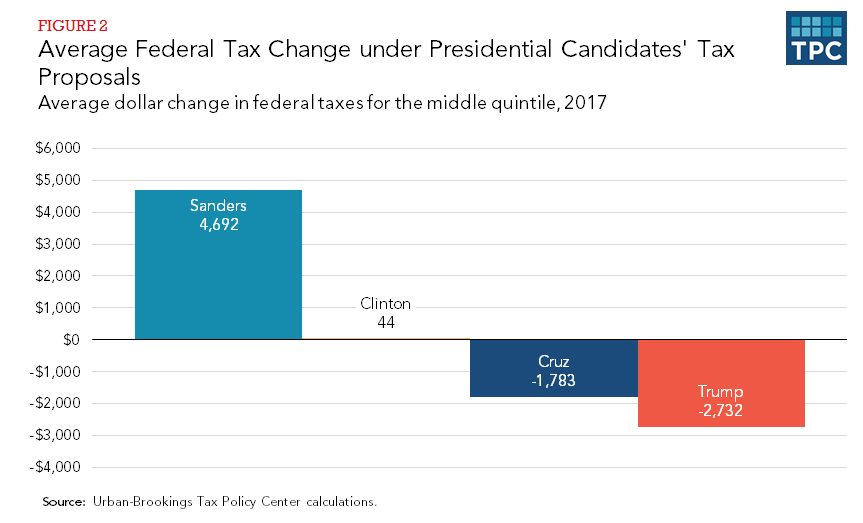 There is more to the story, of course. Sanders says he’d use those across the board tax hikes to pay for free health care and college education, sharply reducing out-of-pocket costs for consumers. And Trump and Cruz insist their tax cuts would generate powerful economic growth.  Then there is the matter of how the Republican candidates would pay for their enormous tax cuts, or whether even the huge tax increases Sanders proposes would cover the cost of his ambitious spending plans.

But just looking at the tax side, the contrasts among the candidates are remarkable and almost certainly unprecedented in U.S. history. This is way too interesting to ignore. I hope voters start to pay attention.