For state and local finance geeks, nothing is more fun than poring over the Census Bureau’s Census of Governments. The agency only updates the data every five years, so imagine my excitement when it released its latest version (for 2012) just a few months ago. Although Census and other agencies release some state and local data on an annual or quarterly basis, only the five year census allows us to do a deep dive.

It takes five years for comprehensive data because the good folks at Census survey every state, county, city, town, school district, flood control, mosquito abatement, and other special district government in the United States. They ask about taxes, spending, borrowing, and just about anything else having to do with public funds. Then they consolidate this information and make it comparable across 90,000 different jurisdictions and over six decades (some information goes back even earlier).

The latest update, which you can access using our nifty interactive data tool, shows us a lot about just how hard local governments were pounded by the Great Recession. It describes a powerful double-whammy: Local governments not only suffered deep declines in their own tax revenues but they also faced steep cuts in state aid. And many are still recovering.

Local governments are still contending with lower than average property tax revenue growth due to the hit that home prices took starting in 2007. This pattern contrasts with prior downturns, such as the 2001 recession shown in the 1997-2002 data below. 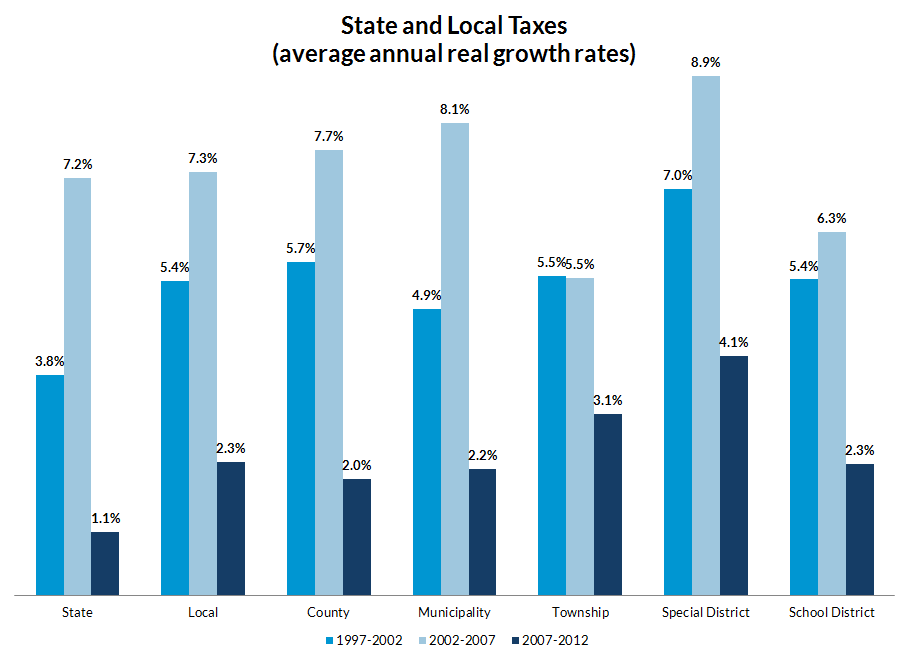 And, as with many aspects of this recession, school aid cuts affected some states more than others. In Arizona, state payments to independent school districts fell by 31 percent. This is something in a state where school districts rely on state transfers for nearly half of their general revenue. Although the federal government increased aid to states and localities in the 2009 stimulus, most of these payments went away in 2011 and 2012.

It remains to be seen whether state spending cuts will be sustained and how they will interact will increasingly popular state tax cuts. In Arizona, school districts successfully sued the state over inadequate school funding and now the state must repay nearly $3 billion, perhaps jeopardizing the governor’s plan for eliminating the state income tax.

There is much more to learn from the new Census data. Check out our interactive research tool to learn more about sales or property taxes, K-12 or public safety spending, and all other revenues and expenditures in your state or a collection of states. You can download our tables or make your own in real or nominal dollars, per capita or as a share of personal income. Keep us posted on what you find and we will do the same.