Fix the Existing Corporate Tax Before Forging a New One

The Build Back Better (BBB) bill’s winter holiday gives Congress more time to evaluate the plan’s components, including a 15 percent minimum tax on the book income of very large US corporations. The minimum tax could raise significant revenue—an estimated $320 billion over 10 years. But the price would be increased economic distortions and administrative complexity.

The book minimum tax, which would apply to the roughly 300 US corporations with at least $1 billion in income, would not reform the narrow-based, low-rate income tax that applies to most US corporations. Though raising the corporate tax rate proved politically impossible, Congress could raise significant revenue with fewer distortions and greater transparency by broadening the corporate tax base and trimming overgrown incentives.

The book minimum tax can perhaps be best understood as a fig leaf for the perennial embarrassment of big, financially profitable US multinational corporations paying little or no domestic income tax. Regular reports that average effective corporate tax rates are well below the statutory corporate tax rate have increased pressure on Congress to act.

But why should anyone be surprised that corporations are paying so little, when the US corporate income tax now combines a low rate, a narrow base, and generous tax credits? Tax breaks accumulated under past and present regimes have reduced corporate income tax revenue as a share of the economy by nearly half in recent years.

The main cause of the recent decline in corporate tax revenue was the 14-point corporate tax rate cut introduced by the Tax Cuts and Jobs Act (TCJA). Corporate revenues began to slide before 2018, as corporations accelerated deductions and deferred income to take advantage of the impending rate cut.

TCJA also reduced revenues by narrowing the corporate tax base. Notably, it allowed 100 percent “bonus depreciation” (expensing) of most equipment investment through the end of this year, then phased it out through 2026. The default tax depreciation system for domestic investment, the modified accelerated cost recovery system (MACRS), offers accelerated depreciation for most machinery and equipment.

The tax code also offers incentives for intangible investment. US businesses have been allowed to expense research and experimentation (R&E) costs since the 1950s. But the TCJA requires firms to capitalize R&E spending and amortize it over 5 years beginning this year. BBB would extend expensing for four more years at a cost of $4 billion.

Despite allowing full expensing, the corporate tax also permits businesses to deduct most interest costs. TCJA restricted those deductions to 30 percent of earnings before interest, tax, depreciation, and amortization (EBITDA) through 2021, and to 30 percent of earnings before interest and tax (EBIT) thereafter. BBB would further restrict interest deductions, raising corporate taxes by about $28 billion over 10 years.

TCJA’s foreign derived intangible income (FDII) provision also narrowed the tax base subject to the standard corporate tax. Under FDII, export-related income that exceeds a 10 percent return on US tangible assets enjoys a 13.1 percent tax rate. President Biden would have repealed FDII, which currently costs about $10 billion per year, but the House chose only to raise the net tax rate to 15.8 percent.

The corporate tax base is now so narrow that the effectiveness of its own investment incentives is undermined. Many companies pay so little tax that marginal deductions and credits no longer have any immediate value. In 2018, firms carried forward $74 billion in unused business credits, more than twice their value a decade earlier. 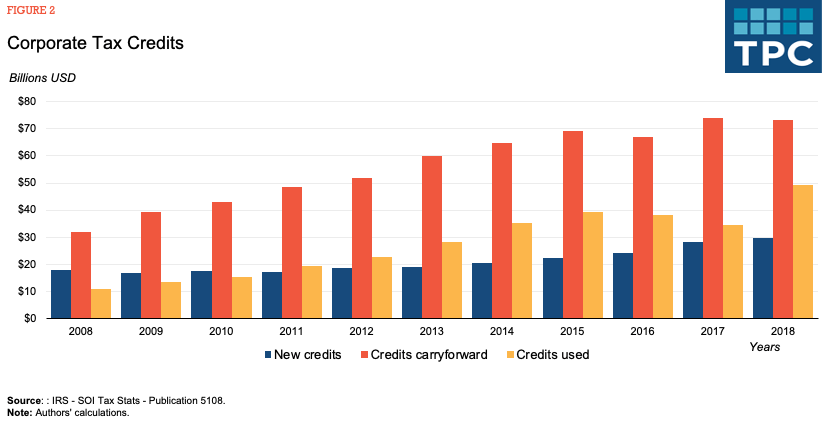 While raising the effective tax rates of some big companies might dissipate public outrage, it does not address the ongoing erosion of the US corporate income tax. Before layering on an alternative, Congress should reform the standard regime. Terminating bonus depreciation early, retaining R&E capitalization, tightening interest deductions, and repealing FDII would save about $185 billion over 10 years. The remaining book minimum tax revenues could be replaced by some combination of tax credit streamlining and incremental rate increase.