The best fiscal news in 2019 may have been that nearly all states managed to approve their budgets on time for the second year in a row. Only New Hampshire and North Carolina failed to meet their deadlines. Solid revenue growth made budget decision-making relatively easy.

However, state tax revenues saw large fluctuations in the timing of income tax payments throughout 2019, largely due to federal tax changes from the 2017 Tax Cuts and Jobs Act (TCJA). 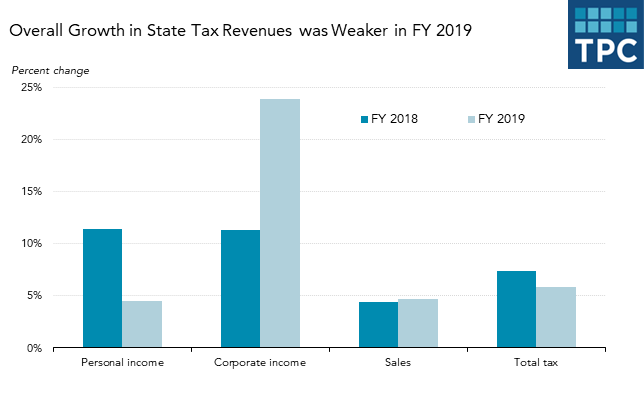 Personal income tax revenues grew by 4.5 percent in fiscal year 2019, despite a dip in December 2018 and January 2019 that reflected later than normal tax filing and associated payments. Taxpayers may have delayed filing as they tried to understand the impact of the TCJA on their state taxes. The volatility in income tax collections may also have been caused by some high-income taxpayers who accelerated state income tax payments into calendar year 2017 to take advantage of the full deductibility of the state and local taxes, which the TCJA capped at $10,000 beginning in 2018.  (For more discussion of the TCJA’s impact on state income tax payments, please read Urban Institute’s State Tax and Economic Review quarterly reports).

State sales tax revenues grew 4.7 percent in fiscal year 2019, slightly faster than the 2018 pace of 4.4 percent. There were two primary reasons:  First, states moved aggressively in the wake of the US Supreme Court’s Wayfair decision that allowed them to require remote retailers to collect sales taxes on purchases by buyers inside the state. Second, by cutting taxes for the vast majority of households, the TCJA put money into consumers’ pockets, much of which they likely spent on products or services subject to state sales tax.

Overall, most states ended fiscal year 2019 in a good place. However, state revenue forecasters are predicting weaker growth in income tax revenues in fiscal year 2020, reflecting the temporary nature of some of the prior increases, uncertainty about trade policy, and a slowing US economy. It makes sense for states to be cautious about their fiscal futures.