Finding A Politician Who Would Pay For What She Promises

The folks over at the Committee for A Responsible Federal Budget have added up the cost of Democratic presidential hopeful Hillary Clinton’s policy platform and how she’d finance it. And, lo and behold, it looks like she’d actually pay for nearly all she wants to do. In contemporary American politics, this is nothing short of amazing.

You don’t have to like the new government programs she’s proposing (a collection of new spending and tax credits aimed at addressing a long list of kitchen table issues). And you don’t have to like how she’d pay for it all (almost entirely by raising taxes on high-income households and businesses).  You might be discouraged at her lack of interest in tax reform. And you might wish that she’d acknowledge the need to reduce the federal debt, not just stabilize it.

Still, in an election season when other candidates think nothing of adding trillions of dollars to the debt, Clinton’s agenda seems…almost frugal. 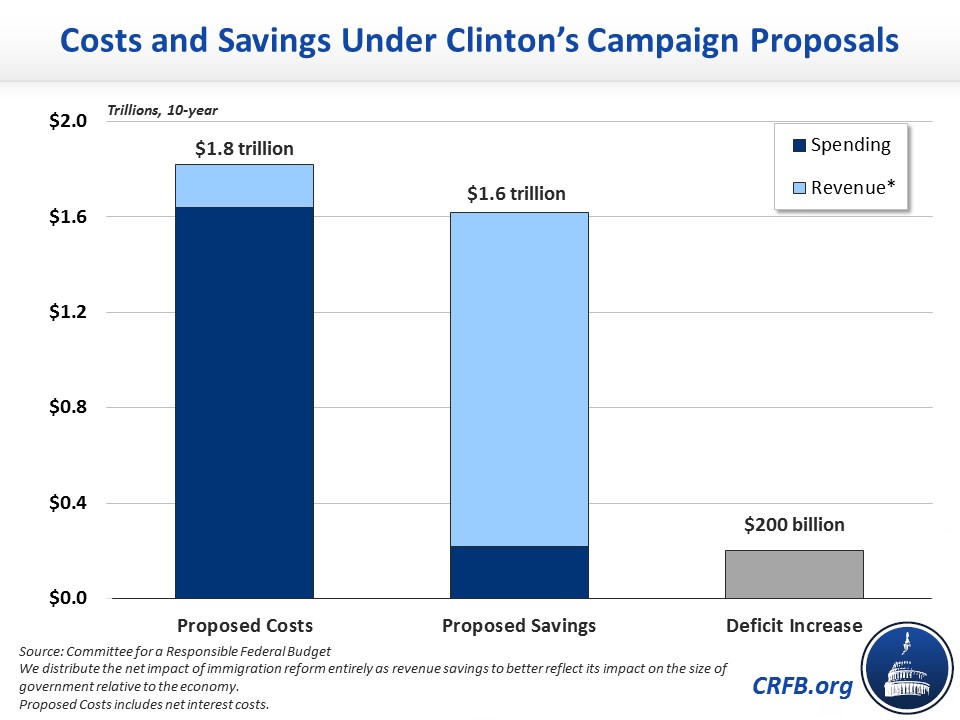 The contrast to her opponents is stunning. Clinton would add about $200 billion to the debt over 10 years, a rounding error in budget-world.  CRFB figures Ted Cruz would add $12.5 trillion to the debt over the same period and Donald Trump would boost the nation’s debt by between $11.7 trillion and $15.1 trillion. The group  projects  Bernie Sanders would add between $2  trillion and $15 trillion to the nation’s flood of red ink.  That wide range is mostly due to uncertainty over the cost of his single-payer health plan. If you’d like to learn more about the tax side of the candidate plans, take a look at the Tax Policy Center’s election 2016 web channel here.

At their most profligate, candidates would nearly double the nation’s debt as a share of the economy, to about 140 percent of Gross Domestic Product.  Even during World War II, our debt/GDP ratio topped out at about 104 percent. At 140 percent, we’d be in the neighborhood of Italy and Portugal, but with much worse food.

It is not easy to predict precisely the economic consequences of this fiscal madness, but it isn’t hard to describe the effects broadly: Interest rates would rise, probably by a lot. That in turn would slow the economy, making it even more difficult to pay off the debt. And if investors started wondering about whether the US was good for these historically high levels of borrowing…well, ask Portugal what happens next.

There is one caveat to Clinton’s relative fiscal responsibility. Team Clinton has been promising another round of tax cuts for middle-income households. We don’t know what they are, or how she’d pay for them (raising taxes on the rich some more, perhaps?) So we are looking at an incomplete tax-and-spending plan.

As a bumper sticker, Vote Hillary: She Won’t Make Things Worse isn’t exactly a grabber. Yet, when it comes to broad fiscal policy, it seems to be true.  I wish we could say the same for her rivals.