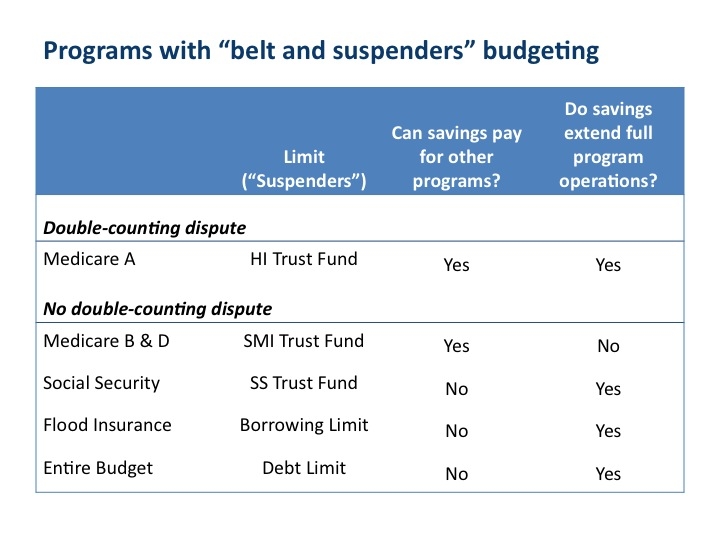 The Fight Over Medicare Double Counting

The recent double-counting dispute isn’t just about politics; it also reveals a flaw in budgeting for Medicare Part A.

Budget experts are waging a spirited battle over the Medicare changes that helped pay for 2010’s health reform. In April, Chuck Blahous, one of two public trustees of the program, released a study arguing that the Affordable Care Act (ACA) would increase the deficit by at least $340 billion by 2021, a sharp contrast from the $210 billion in deficit reduction estimated by the Congressional Budget Office (CBO).

Chuck bases his estimates on several factors, but the item that has garnered the most attention is his charge that the ACA’s spending cuts and revenue increases in Medicare Part A are being double counted: once to help pay for the ACA’s coverage expansion and a second time to improve the finances of the Part A trust fund, whose predicted exhaustion was delayed by several years.

Chuck notes that those resources can be used only once: They can either offset some costs of health reform or strengthen Medicare, but not both. He believes those resources will ultimately finance additional Medicare spending and thus can’t offset any health reform costs. For that reason, he concludes that the ACA would increase deficits, rather than reduce them.

That argument inspired a host of commentary from leading budget experts, ranging from denunciation to affirmation. See, for example, Jeffrey Brown, Howard Gleckman, Peter Orszag, Robert Reischauer (as quoted by Jonathan Chait), and Paul Van de Water, and a follow up by Chuck and Jim Capretta.

Why does this dispute exist? It can’t just be politics. If it were, we’d have double-counting disputes about every program. But we don’t. We thus need an explanation for why this debate has erupted around Medicare Part A, which provides hospital insurance, but not around other programs. Part A is not unique in controlling spending by a “belt and suspenders” combination of regular program rules (the “belt”) and an overall limit (the “suspenders”). Such budgeting also applies to Social Security, Medicare Parts B and D (which cover physician visits and prescription drugs), and the National Flood Insurance Program. The federal debt limit acts as “suspenders” for the entire budget. But none of those give rise to double-counting disputes.
That suggests that there is something unusual—perhaps flawed—about budgeting for Medicare Part A. To see what that is, it helps to boil the dispute down to two basic questions about programs subject to “belt and suspenders” budgeting. 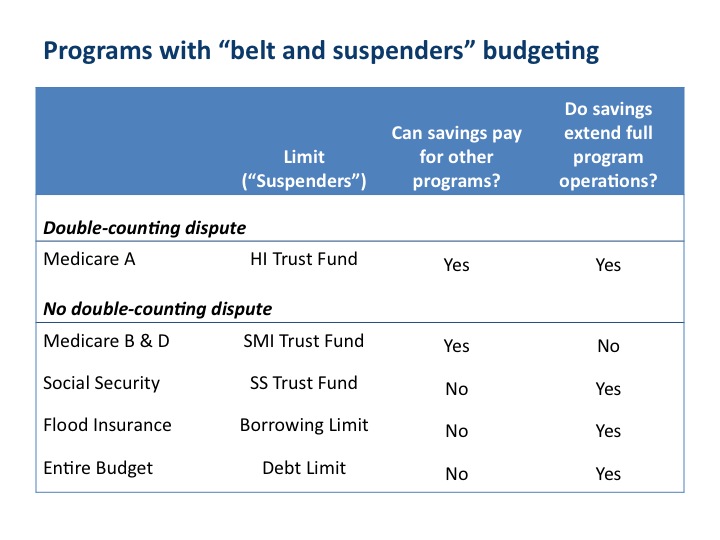 First, can spending reductions or revenue increases in the program offset spending increases or revenue reductions in other programs? In short, can budget savings pay for other programs? Or must they stay within the program itself?
Second, would hitting the overall budget limit affect program operations? In other words, do budget savings extend the period during which the program can operate at full capacity? Or is the limit operationally toothless?

As shown above, policymakers have answered these questions differently for different programs (for further details, see the appendix).

This comparison reveals the unique feature of Medicare Part A: It is the only one of these programs that allows budget savings to pay for other programs and has a trust fund with real operational teeth. It alone answers Yes to both questions. That is why Medicare Part A is the only program that creates the possibility of double counting and suffers from the reality of a double-counting dispute.

But double counting is possible in Medicare Part A. That happens whenever someone claims that the health reform legislation both reduces deficits and provides additional resources to Medicare Part A. I will leave it to others to adjudicate whether any health reform proponents committed that error. I will note, however, that every budget expert, including Chuck Blahous, agrees that CBO didn’t do so (its baseline ignores the trust fund, so savings reduce deficits and have no effect on program operations).

Bottom line: The peculiar budget rules for Medicare Part A make it possible for analysts, pundits, and policymakers—whether willfully or inadvertently—to double count budget savings in Medicare Part A. That needless confusion is a significant flaw. To correct it, Congress could adopt the budget practices it uses in Social Security, Medicare B & D, or the NFIP. In a follow-up post, I will examine the pros and cons of these alternatives.

In Medicare Part A, spending is determined by rules about benefit eligibility and provider payment rates. If the Hospital Insurance (HI) trust fund balance falls to zero, however, spending faces a separate, hard limit: payments can’t exceed receipts. Program operations would thus be disrupted if the trust fund became exhausted. Congressional budget rules ignore the trust fund and assume that spending will continue at scheduled levels regardless of its balance. Under that approach, any spending reductions or revenue increases in Medicare Part A generate new budget resources that can be used to pay for changes in other programs.

Social Security operates differently. It faces the same operational limitations as Medicare Part A if its trust fund balance falls to zero. But Congress enacted special rules that forbid any Social Security spending cuts or revenue increases being used to pay for other programs. Such savings therefore accrue in the trust fund. The trust fund thus matters for operations, and savings cannot be directed to other parts of the government. (Social Security actually involves two programs, one for retirement and one for disability, and two corresponding trust funds; these comments apply equally to both.)

Medicare Parts B and D operate in a third way. Like Part A and Social Security, their spending is determined by eligibility and payment rules and gets paid out of a trust fund (the Supplementary Medical Insurance or SMI trust fund). But that fund has unlimited right to draw on general tax revenues. A zero balance thus results in general revenue transfers, not operational disruptions. Reforms don’t increase the life of the trust fund (since it can never go broke), and savings can be used to finance other programs.

The National Flood Insurance Program operates in yet another way. The NFIP is required to finance itself out of its insurance premiums; if its costs exceed those premiums, it can borrow from the federal government up to a specified limit. Once that limit is reached, payments can’t exceed its revenues, and operations are disrupted. The borrowing limit thus acts like the trust fund balance in Medicare Part A or Social Security, except that it allows the program to go a fixed amount into the red.

Congressional budget rules treat the borrowing limit as a fundamental restraint on NFIP spending. If the program is expected to run annual deficits, as it is today, those deficits exist only until the borrowing limit is reached. After that, the NFIP is projected to break even, with spending restrained to equal revenues. If Congress reduces the annual deficits in the NFIP (e.g., by increasing premiums), those savings allow the program to operate longer before reaching its borrowing limit. Any temporary budget savings thus get offset by increased NFIP spending in later years. Those temporary budget savings thus cannot be used to offset spending in other programs (unless hitting the borrowing limit is pushed beyond the budget window).