The recently completed US Department of Justice (DOJ) investigation into Ferguson’s police department highlighted “the City’s focus on revenue rather than … public safety needs” when setting law enforcement priorities. It noted that fines and forfeitures nearly doubled as a share of the city’s general fund revenues from fiscal years 2010 to 2015 (from 12 to 23 percent), while fines for everyday offenses like “weeds/tall grass” often exceeded $100 (versus $5 in some neighboring communities).

The DOJ did not show how Ferguson stacks up against other US cities, or how its finances have changed over time. Thanks to recently released Census data, we can see how it compares.

And the data show that Ferguson is an outlier.

In fiscal 2012, the city derived 12.9 percent of its general revenues from fines and forfeitures, compared with 2.5 percent in other Missouri cities. The comparable share for all mid-sized US cities (with 5,000 to 50,000 people) was 1.8 percent. 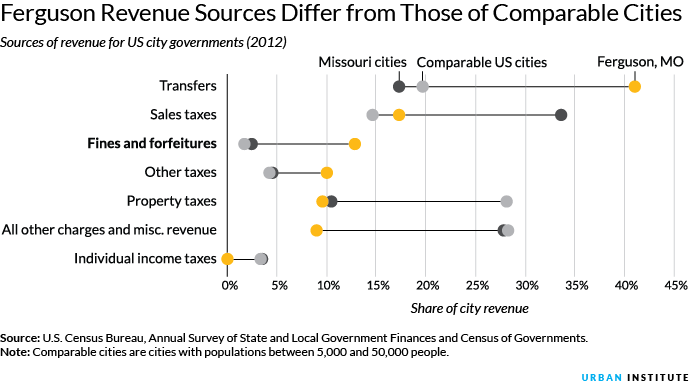 Population change does not explain differences

Ferguson lost more than a quarter of its population between 1972 and 2012, shrinking from about 29,000 to 21,000 residents. But my colleague Sarah Gault and I found that in other cities that shrunk by more than a quarter over the past 40 years, fines and forfeitures provided 1.6 percent of general revenues.

Ferguson shifted from predominantly white (74 percent) in 1990 to predominantly black (67 percent) in 2010. Other US cities that have gone through a similar minority-to-majority transition derived 1.7 percent of fiscal 2012 general revenues from fines and forfeitures.

The comparisons don’t look any different if we consider other places like Ferguson with household incomes in the $40,000 to $50,000 per year range. They are the same for other majority (greater than 55 percent) black US cities.

Where does the money go? Ferguson spent 40 percent of its general expenditures on public safety in 2012. This was higher than other Missouri cities (28 percent) or comparably sized US municipalities (29 percent). However, public safety is often the largest spending category for US cities, and Ferguson’s allocations across budget categories have remained fairly constant since 1972.

So what’s going on? Like a lot states, Missouri got swept up in the tax revolt movement of the late 1970s. Voters passed several initiatives to limit taxes, most prominently the so-called Hancock Amendment limiting taxes to a fixed percentage of personal income and requiring voter approval for any tax increases beyond a minimal threshold. In Ferguson, as in a lot of US cities, property tax collections fell immediately afterwards, and user fees and charges grew to take their place.

But, as Governing and Better Together have shown, while Ferguson is an outlier, it is by no means the most extreme Missouri city in its reliance on fines and forfeitures. It is not even in the top 20; that distinction goes to several smaller jurisdictions, most with populations of fewer than 5,000 people.

Another outgrowth of the tax limitation movement was that cities became more dependent on higher levels of government. In Ferguson, intergovernmental transfers rose by 50 percent from 1977 to 1982 (though this total includes the city's share of St. Louis County sales tax revenue sharing pool). Intergovernmental aid spiked again in the 1990s, and then in 2009 with passage of the US Recovery and Reinvestment Act. Although Census only provides detail on fines and forfeitures after 2007, it’s interesting to note that the latest uptick coincides with the withdrawal of federal stimulus payments.

Other commentators have offered explanations for Ferguson’s troubles ranging from government bloat to off cycle elections to political fragmentation. Ferguson’s small size may make it especially prone to relying on higher levels of government or excessive penalties as opposed to taxes or user fees. Small cities have also been at the center of corruption scandals in California.

The Great Recession was tough on city budgets, leaving many places struggling to make ends meet and pushing a few over the edge into municipal bankruptcy. Now revenues are coming back, but some observers worry about a “new normal” of sluggish growth due to wage stagnation, anti-tax sentiment, and ongoing federal policy uncertainty.

One thing is clear: there is a model of cities in which voters get valued services from government and in return are willing to pay higher property taxes and user fees. Excessive penalties are more like the concept of “tax exporting,” or getting tourists and other non-residents to pay a bigger tax share. Penalties for violations of the law should be used to deter criminal behavior, not to export taxes to your own citizens.

This is not the new normal.