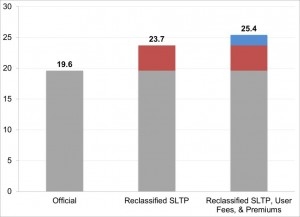 The Federal Government Spends Lots More than You Think

When we talk about the federal budget, we usually rely on the government’s official definition of “spending” which is to say the amount of money that’s run through federal agencies.

But, in reality, the federal government spends a lot more than that. Using a broader definition of spending, which includes hundreds of billions in dollars of tax subsidies, my Tax Policy Center colleagues Donald Marron and Eric Toder have concluded that government spends 30 percent more than it admits.

Just take a look at this chart: 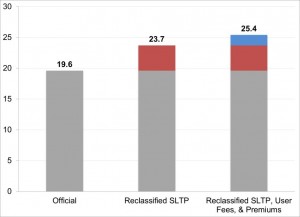 It shows three measures of spending in 2007 (Donald and Eric picked 2007 so they wouldn't get tangled in the stimulus, financial market and auto bailouts, and all of the other temporary outlays that government made in response to the 2008-2009 financial meltdown).

The column on the left shows how much spending shows up on government’s official books.  The one in the middle includes what Donald and Eric call Spending-like Tax Preferences (SLTP): Tax subsidies that substitute for spending. Often, Congress dropped these initiatives into the tax code solely to hide the fact that they are spending.

Take the mortgage interest deduction. Instead of giving homeowners a tax subsidy, Congress could just as easily have had the Federal Housing Administration or some other agency write every homeowner a check to lower their monthly mortgage payments. Now, it may be more efficient to run this subsidy through the tax code. But a tax deduction is no less a subsidy than that check.

This is policy that fails what the lawyers like to call the duck test:  If it looks like spending and quacks like spending, it is spending-- even it resides in the Internal Revenue Code.

The last column adds another $230 billion in user fees and premiums (which government bean-counters like to call negative spending or offsetting receipts). By adding them back, the study shows the gross cost of programs such as Medicare, not just the part that is unfunded by those fees and premiums.

Add it all up and, in 2007, the government didn’t spend $2.7 trillion--the number that appears in the federal budget—it really spent the equivalent of $3.5 trillion.

Keep in mind that Eric and Donald didn’t include all tax expenditures in their calculations. They left out  provisions such as low tax rates on capital gains, the step-up in basis for gains at death, 401(k)s, and accelerated depreciation of plant and equipment, none of which are quite equivalent to spending.  That made their calculation of spending smaller than it might have been.

But they included many other well-known tax preferences, such as the exclusion for employer-sponsored health insurance, and deductions for mortgage interest, most state and local taxes, and most charitable gifts, as well as the Earned Income Tax Credit (the government already does treat the refundable portion of such credits as spending).

This study is important for two reasons:

First, it provides a much more transparent look at how big government actually is.

Second, it creates an interesting perspective when you look at plans to cut tax rates while scaling back these tax preferences. Looked at through Donald and Eric’s prism, trimming many of those subsidies is not raising taxes at all, but cutting spending.  And maybe, just maybe, framing them that way may make those cuts possible.