Expanding The EITC To Include Family Caregivers

A handful of the remaining Democratic presidential candidates remain committed to increasing the earned income tax credit (EITC), particularly for workers without children at home. But former Mayor Mike Bloomberg has proposed a broader innovative expansion – a pilot project to extend the credit to family caregivers even if they don’t have earnings from a job outside the home.

Bloomberg’s notion is that EITC benefits could help support those who are performing important work – but aren’t paid for doing so. That’s a different approach from proposals by Amy Klobuchar and Joe Biden aimed at subsidizing the expenses incurred by caregivers. (My colleague Howard Gleckman has a thoughtful blog on those proposed tax credits here.)

The Bloomberg campaign has not released details on its plan, but it appears to track a proposal from the Economic Security Project (ESP) to include caregivers in an expansion of the EITC, called the Cost-of-Living Refund.  We analyzed the ESP plan here.

The ESP proposal would grant the maximum credit to family caregivers – even if their earnings were too low to qualify them for the full benefit (figure 1). 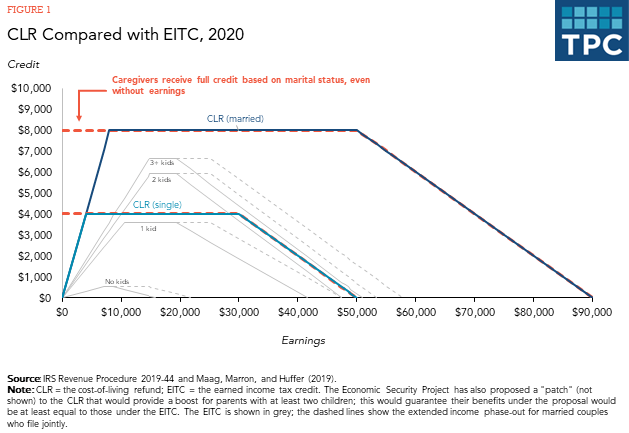 This initiative represents a measured approach to supporting the lowest-income caregivers by building on an existing tax program. And this proposal would begin to recognize the essential work done by family caregivers.