Expanding the earned income tax credit (EITC) has support from a wide range of policy experts. Yet the expansion ideas come in many different forms. One of the most recent is the Cost-of-Living Refund (CLR) that has been proposed by the Economic Security Project (ESP – an advocacy organization focused on improving economic security for low- and middle-income people). Senator and Democratic presidential hopeful Cory Booker (D-NJ) has based his proposed expansion of the EITC on the CLR.

The CLR seeks to address problems associated with the rising cost of living and stagnating wages. For workers, it follows the basic structure of the EITC: It would phase in as earnings rise, reach a maximum amount, and then phase out at higher incomes (figure 1 – the grey lines show the existing EITC while the blue and orange lines show the proposed CLR).

The CLR departs from the EITC in four key ways. It:

The CLR would cost $2.5 trillion from fiscal years 2019 – 2028. Since the current EITC is projected to cost $0.7 trillion over that same period, the CLR would deliver a total of $3.2 trillion in benefits over a decade. 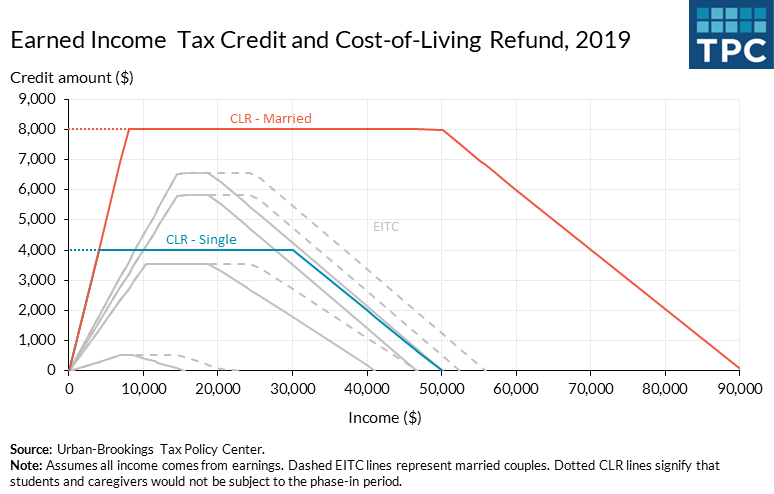 The EITC already is among the federal government’s most successful anti-poverty programs, lifting about 6 million people out of poverty each year. Because the CLR would phase in much more quickly than the EITC and provide maximum benefits to low-income students and caregivers, we estimate it would lift about 9 million more people out of poverty in 2019.

The CLR simplifies credit claiming and administration. Rather than sorting through complicated rules determining who may correctly claim a child for the EITC, the CLR bases benefits on whether a person is married or not. Increasingly, children are supported by adults in more than one household throughout the year, a situation that can make it hard to determine who should receive the EITC.

In the current design, single parents with at least two children would receive smaller benefits under the CLR than the EITC. However, ESP proposes a special, larger benefit to make sure no current EITC recipient receives lower benefits under the CLR. This patch would cost an additional $0.1 trillion over 10 years and also add back in some complexity.

Finally, delivering the credit on a monthly basis would make it easier for people with irregular incomes to stabilize their finances. Nearly 40 percent of low-income households have monthly income that is above or below their monthly average income by at least 25 percent in at least six months of the year – something that can make the payment of recurring monthly bills difficult. However, some portion of or all payments advanced incorrectly might need to be repaid at tax time.

On the downside, just like all credits that phase out, the CLR would increase marginal tax rates for people as their benefits decline. That can serve as a disincentive to work or may be deemed unfair. In general, the existing literature on the EITC suggests the work disincentive applies mainly to married couples, and particularly, to the lower-earning spouse.

The CLR is a big-ticket option for policymakers who want to use the tax code to substantially increase government assistance for low- and middle-income families. It would build on the success of the EITC but offer a much larger subsidy for workers without children at home and would simplify tax filing for many. It would also expand the eligible population to some low-income students and caregivers.

cost of living refund
CTC
EITC
Cory Booker
How will Cory Booker expand the EITC?
What is the Cost-of-Living Refund?
EITC expansion