Don't Forget Those Tax Cuts In The House Health Bill

For all the attention being paid to the changes in the health insurance exchanges in the House-passed American Health Care Act (AHCA) it is easy to forget: The bill would cut taxes by nearly $900 billion over the next decade, mostly benefitting the highest-income Americans.

The AHCA undoes a pile of Affordable Care Act taxes, nearly all targeted to high-income households and health-related businesses. It would repeal the ACA’s 3.8 percent net investment income tax and its 0.9 percent Medicare surtax on individuals making $200,000 or more and couples with incomes exceeding $250,000. It also would kill the “Cadillac tax” on high-cost employer-sponsored insurance and the ACA’s taxes on health insurers as well as pharmaceutical and medical device firms.

At the same time, it would dump the ACA’s penalties on people who don’t have insurance and large employers who don’t offer coverage to their employees.  The AHCA also would redesign the tax subsidy for those buying on the individual market: Instead of adjusting those subsidies based on income as the ACA did, the AHCA calculates them mostly on age (though they are phased out for high-income people). 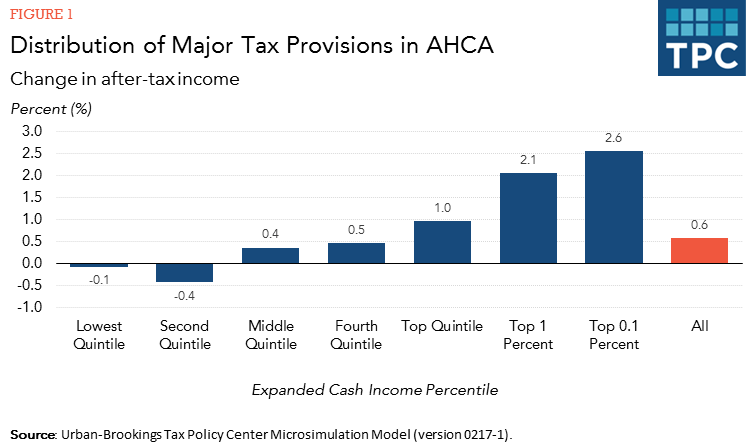 President Donald Trump talks to House Speaker Paul Ryan of Wis. in the Rose Garden of the White House in Washington, Thursday, May 4, 2017, after the House pushed through a health care bill. (AP Photo/Evan Vucci)