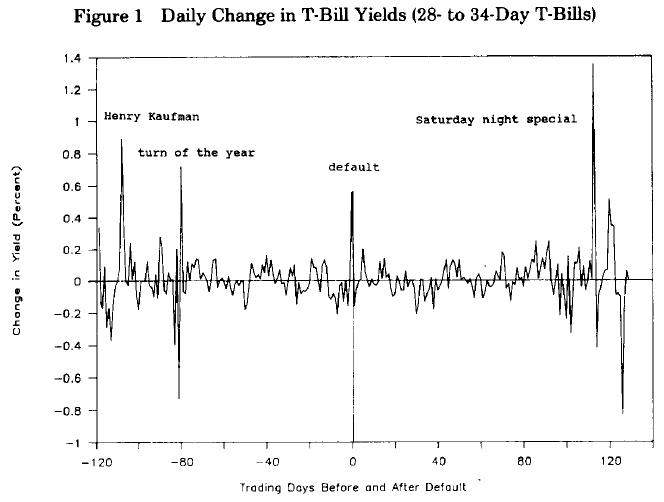 The Day the United States Defaulted on Treasury Bills

Since the day of Alexander Hamilton, the United States has never defaulted on the federal debt.

That’s what we budget-watchers always say. It’s a great talking point. One that helps bolster the argument that default should not be an option in Washington’s ongoing debt limit slowdown.

There’s just one teensy problem: it isn’t true. As Jason Zweig of the Wall Street Journal recently noted, the United States defaulted on some Treasury bills in 1979. And it paid a steep price for stiffing bondholders.

Terry Zivney and Richard Marcus describe the default in The Financial Review (sorry, I can’t find an ungated version):

Investors in T-bills maturing April 26, 1979 were told that the U.S. Treasury could not make its payments on maturing securities to individual investors. The Treasury was also late in redeeming T-bills which become due on May 3 and May 10, 1979. The Treasury blamed this delay on an unprecedented volume of participation by small investors, on failure of Congress to act in a timely fashion on the debt ceiling legislation in April, and on an unanticipated failure of word processing equipment used to prepare check schedules.

The United States thus defaulted because Treasury’s back office was on the fritz.

This default was, of course, temporary. Treasury did pay these T-bills after a short delay. But it balked at paying additional interest to cover the period of delay. According to Zivney and Marcus, it required both legal arm twisting and new legislation before Treasury made all investors whole for that additional interest.

Some may quibble about whether this constitutes default. After all, the United States did eventually make its payments. And the disruption applied to only a sliver of its debt – certain T-bills owned by individual investors.

But I think it’s unambiguous. A debt default occurs anytime a creditor fails to make a timely interest or principal payment. By that standard, the United States did default. It was small. It was unintentional. But it was indeed a default.

And the nation still stands. But that hardly means we should run the experiment again and at larger scale. Zivney and Marcus examined what happened to T-bill interest rates as a result of this small, temporary default. They find a surprisingly large effect. As best they can tell, T-bill interest rates increased about 60 basis points after the first default and remained elevated for at least several months thereafter. A simple way to see that is to look at daily changes in T-bill yields: 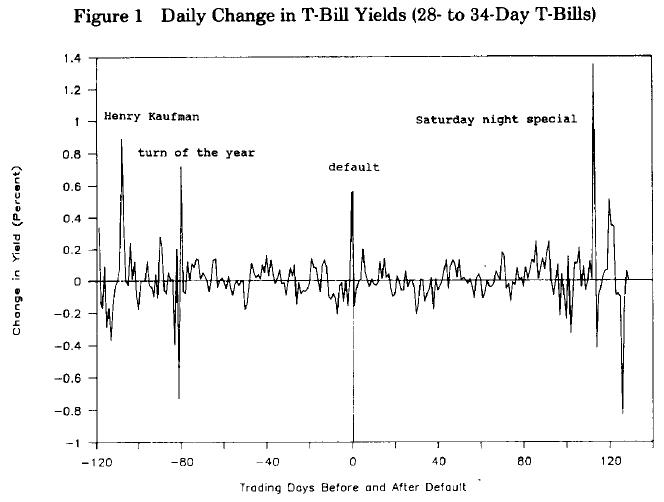 T-bill rates spiked upwards four times in the months around the default. In November 1978, Henry “Dr. Doom” Kaufman predicted that interest rates would rise. They did. Turn-of-the-year cash management caused rates to fall and then rise as 1978 became 1979. And rates spiked and fell in October 1979 when Paul Volcker announced that the Fed would target monetary aggregates rather than interest rates (the “Saturday night special”).

The fourth big move was the day of the first default, when T-bill rates rose almost 0.6 percentage points (i.e., 60 basis points).There’s no indication this increase reversed in the days that followed (the vertical line on the chart is just a marker for the day of default). Indeed, using more sophisticated means, including comparing T-bill rates to interest on commercial paper, the authors conclude that default led to a persistent increase in T-bill rates and, therefore, higher borrowing costs for the federal government.

The financial world has changed dramatically in the intervening decades. T-bill rates hover near zero compared to the 9-10 percent range of the late 1970s; that means a temporary delay in payments would be less costly for creditors. Treasury’s IT systems are, one hopes, more reliable that 1970s vintage word processors. And one should take care not to make too much of a single data point.

But it’s the only data point we have on a U.S. default. Not surprisingly it shows that even temporary default is a bad idea.

P.S. Some observers believe the United States also defaulted in 1933 when it abrogated the gold clause. The United States made its payments on time in dollars, but eliminated the option to take payment in gold. For a quick overview of this and related issues, see this blog post by Catherine Rampell at the New York Times and the associated comments.