Cruz and Trump Would Slash Taxes on New Business Investment, But Cruz Would Cut Them More

Both Donald Trump and Ted Cruz say their tax plans would dramatically boost the economy by reducing taxes on new investment.  According to the Tax Policy Center, both proposals would significantly cut taxes on investment and both would be far more generous than the Democratic hopefuls. However, Cruz would be the most investment-friendly of all the remaining candidates.

The Trump and Cruz plans come with an enormous caveat: Unless they find a way to pay for their tax cuts, each would increase the federal debt by trillions of dollars. And that added borrowing would drive up interest costs, perhaps by so much that it would offset, or even more than offset, the benefits of the tax cuts.

But let’s leave that problem aside for a moment, and just look at how each plan would tax new investments. TPC does this by calculating the marginal effective tax rates (METR) businesses would pay on their capital purchases, or, to put it another way,  the tax to the returns of a break-even investment. The third remaining GOP candidate, John Kasich, has not yet specified his plan in enough detail for TPC to model.

Today, the average METR on new businesses investment is 23.2 percent. For corporations, it is 25.7 percent. For pass-through businesses such as partnerships, it is 19.1 percent (its lower because only the owners pay tax, there is no direct tax on the firm).

Trump and Cruz would substantially reduce the marginal effective tax rate on investment. Trump would do so mostly by lowering statutory income tax rates on all firms and investors. Cruz would move towards consumption tax  by repealing the payroll tax and the corporate income tax, lowering rates on investment income, and instituting a Value-Added Tax (though he is loath to admit it). 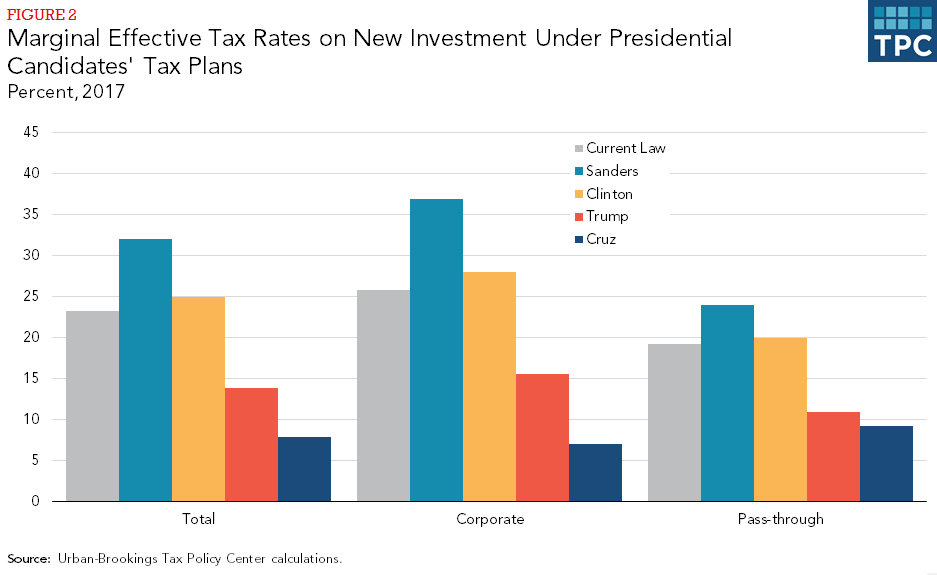 Trump would reduce the marginal effective rate on new investment by about 40 percent, to 13.8 percent. But Cruz would slash average METRs by two-thirds to 7.8 percent. And he’d be more generous for both corporations and pass-throughs.

Who is the Most Generous

Cruz would tax all investment equally. Because corporations could immediately expense the cost of new investments, they’d  pay a 6.9 percent METR on all plant and equipment. Effective rates would vary under the Trump plan (as they do today) depending on what a firm buys and what tax depreciation rules apply. 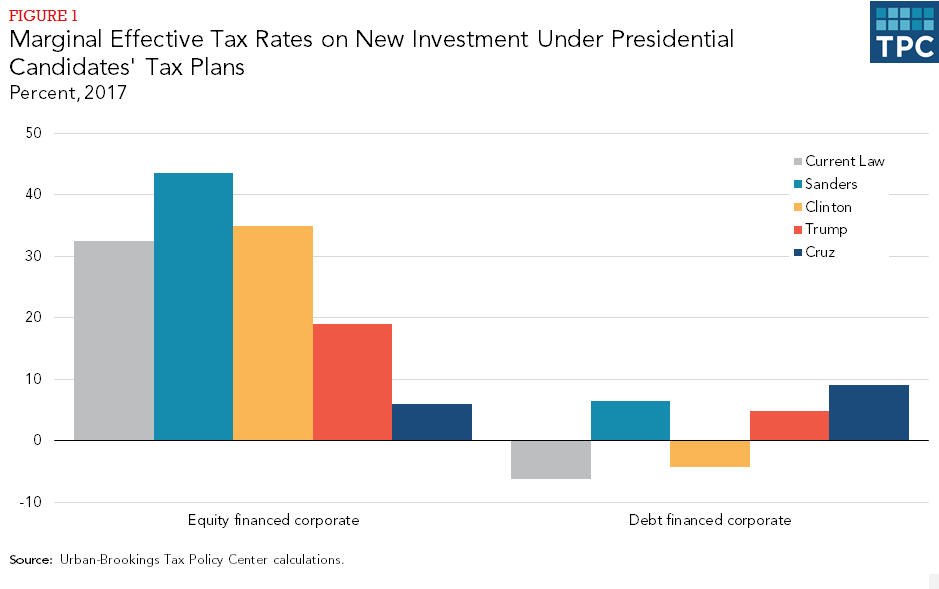 Neither man has the most investment-friendly tax plan that we’ve seen so far in the campaign. That honor goes to Marco Rubio, who would have cut taxes on investment to zero (firms that could take the research credit would enjoy negative rates).

While Cruz’s tax rates on capital investment are more generous than Trump’s, both men are proposing far lower rates than either of the Democratic candidates.

Hillary Clinton would modestly raise METRs to 24.9 percent. She’d boost the rate on pass-throughs slightly, to 19.9 percent, and on corporations to 28 percent. She’d also retain the big spread between METRs on debt-financed investment, which would remain negative, and on equity-funded deals, which she’d raise to 34.9 percent.

As with so much in this campaign, the tax policy contrasts among the candidates are dramatic and worth your attention.

In this July 14, 2015 file photo, an employee works on the assembly line at the General Motors plant in Arlington, Texas. The Commerce Department reports on U.S. factory orders for August on Friday, Oct. 2, 2015. (AP Photo/Tony Gutierrez)