Fiscal year 2021 begins July 1, 2020 in 46 states. Last January, all states were projecting solid revenue growth for the remainder of the 2020 budget year. But the COVID-19 pandemic hit the states like a tsunami starting in March.

Several states have not yet passed their fiscal year 2021 budgets. Revenue forecasters in some of these states are waiting for final individual income tax payments, now due by July 15, to revise their estimates. But 27 states already have updated their projections, including some of the largest, such as New York, California, and Illinois.

Personal income and general sales taxes, which represent about two-thirds of tax revenues in the 27 states with updated forecasts, are projected to decline drastically through fiscal 2021. Corporate income taxes, the third major source of state tax revenues, also are expected to fall sharply. 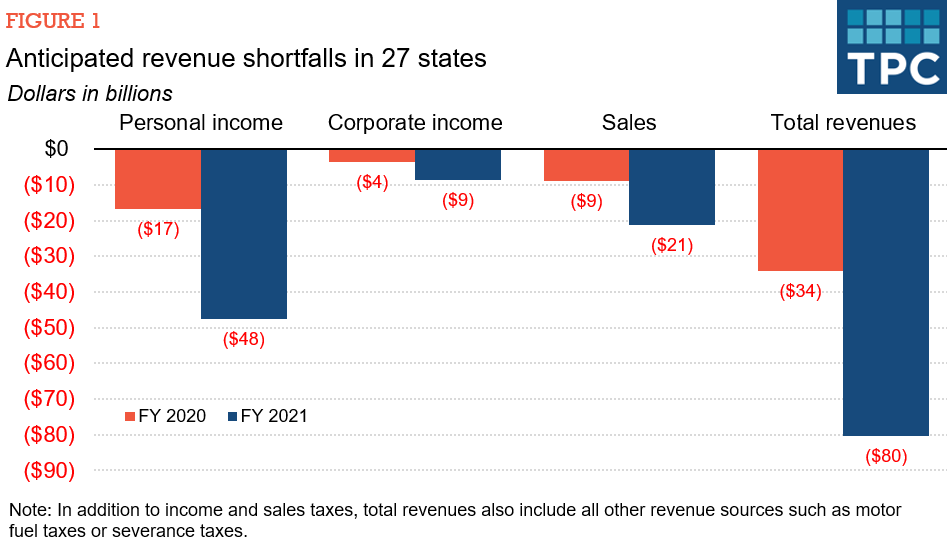 Prior to the spread of COVID-19 and the resulting economic slowdown, states were projecting about 4-percent growth in fiscal 2021 for both personal income and sales tax revenues. Now, states forecast a decline of more than 6 percent for the two largest sources of tax revenues (Figure 2).

Growth in sales tax revenues was steady during fiscal years 2014-2018 and somewhat stronger in 2019, with the increase partially due to the US Supreme Court’s Wayfair decision that allowed states to require remote or online retailers to collect sales taxes on purchases by buyers inside their state.

States now anticipate substantial declines in sales tax revenues for fiscal years 2020 and 2021. Stay-at-home mandates, imposed in an attempt to slow the pandemic, significantly slowed consumer spending starting in late March and early April. While all states have begun reopening their economies—at disparate paces—it will take months until the economy is back on track (and only if the pandemic is brought under control). 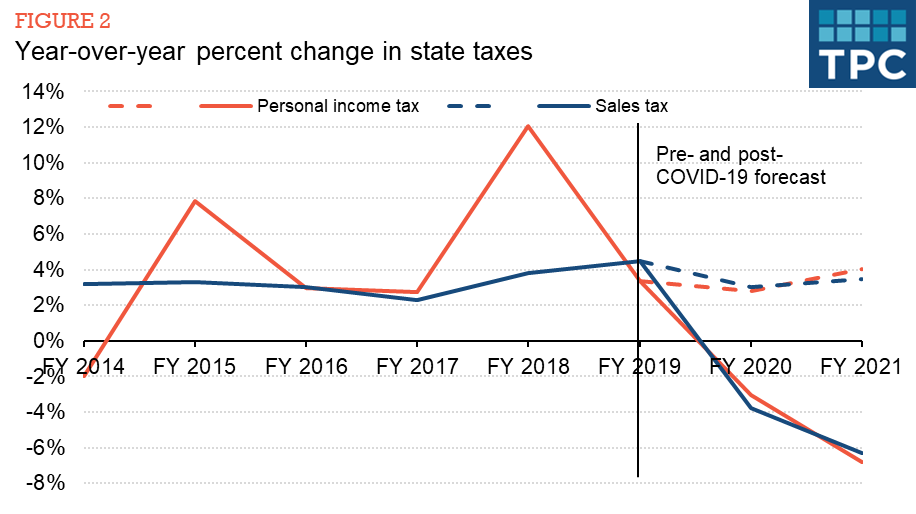 Every state that has updated its forecast predicts a significant decline in revenue. Even the seven states that did not impose stay-at-home orders—Arkansas, Iowa, Nebraska, North Dakota, South Dakota, Utah, and Wyoming—expect revenue shortfalls. Figure 3 shows the percentage change in state tax revenue estimates for fiscal years 2020 and 2021 compared to pre-COVID-19 projections.

Among the 27 states for which we have data, Hawaii is facing the largest expected decline in tax revenues, due to the huge drop off in its tourism industry. States that heavily rely on energy taxes, such as Alaska, New Mexico, and Wyoming, also expect substantial revenue shortfalls. These states were hit by both the pandemic and collapsing oil and gas prices.

A note about New York is warranted because the state appears to have suffered only modest revenue declines though it was hard hit by the pandemic. New York’s revenue shortfalls are understated because its 2020 fiscal year ended in March, just before the state was caught up in the COVID-19 pandemic and the resulting economic storm. 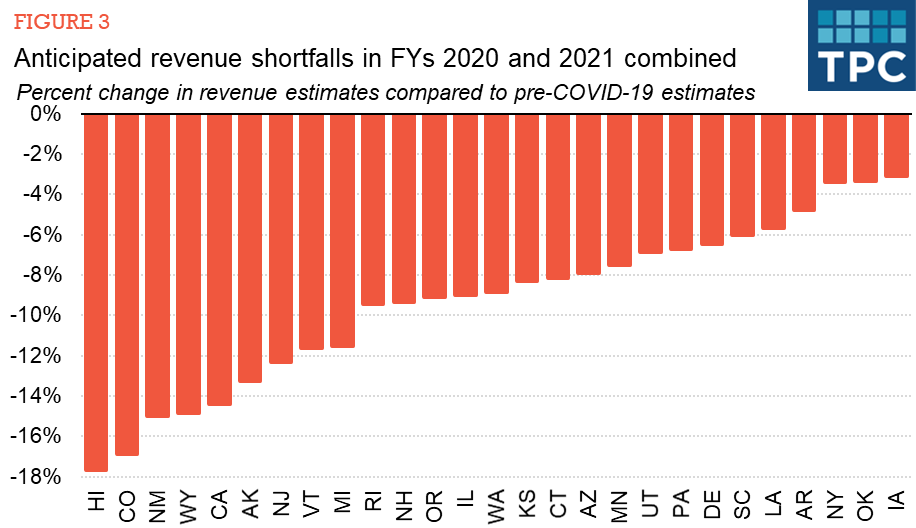 Once the income tax filing season ends and states close their fiscal year 2020 budget books, many states will re-revise their revenue forecasts. This will be enormously challenging since the future path of the economy and the revenue consequences depend on the future of the pandemic itself. But if anything is certain, it is that revenue shortfalls will force states to make tough choices about raising taxes or cutting spending on critical public programs and imposing layoffs on public employees.