Chicago is the first major US city to tax streaming services, but it’s far from the only US government to do so. Whether you’ve noticed it or not, if you live in a state with a sales tax you probably already pay tax on your Netflix (or Hulu or HBO Now) subscription. Thirty-three of the 45 states with a general sales tax, and the District of Columbia, include video streaming services in their sales tax base. 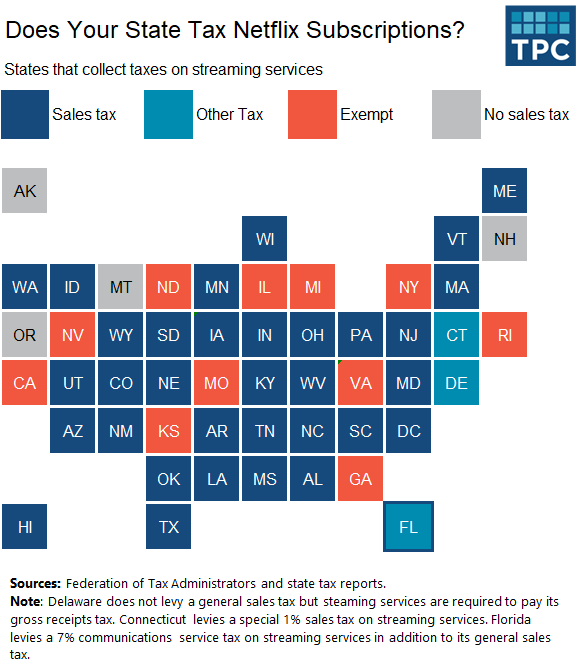 Applying the sales tax to streaming services make sense because of what tax nerds call “horizontal equity.” In short, governments should tax similar people in a similar fashion. A person who purchases movies via a Netflix subscription should be taxed the same way as someone who buys a DVD or rents movies at Blockbuster (that is, if people still rented movies at Blockbuster).

The reason some states exempt streaming services from tax is the same reason states often exempt other services from a tax originally designed for goods. That is, even though consumers now purchase far more services (such as streaming) than goods (such as DVDs), states have struggled at times to keep up and expand what is eligible for the tax.

States are aware of this, but expansion can get tricky because of politics, business interests, and what we call these taxes. For example, when the District of Columbia taxed gym memberships the same as running shoes, some objected to the “fitness tax.” In the same way, many complained about a “Netflix tax” when states began making streaming services subject to the same tax as tangible entertainment products like CDs and DVDs. But all of these taxes are boring old sales taxes—the products are what’s new.

However, Chicago did something different. Instead of expanding its sales tax base, it decided its amusement tax, which applies to concert, theater, and sporting event tickets, also applied to “amusements that are delivered electronically,” such as television shows, movies, and music.

Cities typically levy amusement taxes on big events because they attract lots of people to the city. While cities love all the economic activity the crowds bring, the influx of people also strains city services, and cities want tax revenue (beyond a traditional sales tax) to cover that.

So, when Chicago said streaming services were covered by its amusement tax, essentially it argued that watching Netflix on your couch is more like attending a concert or sporting event than renting a DVD. Even stranger, the law specified that permanently downloading a movie does not trigger the amusement tax (because that’s a purchase) but streaming or renting a movie online does (because that’s an amusement).

Unfortunately for Chicago residents, the combined state, county, and city sales tax rate of 10.25 percent is actually higher than the city’s 9 percent amusement tax, but I assure you this approach is better tax policy. And if cities and states taxed more services like goods, they might be able to lower their sales tax rates. Although, truth be told, that might be as likely as you leaving your parents' account and paying for your own Netflix subscription.